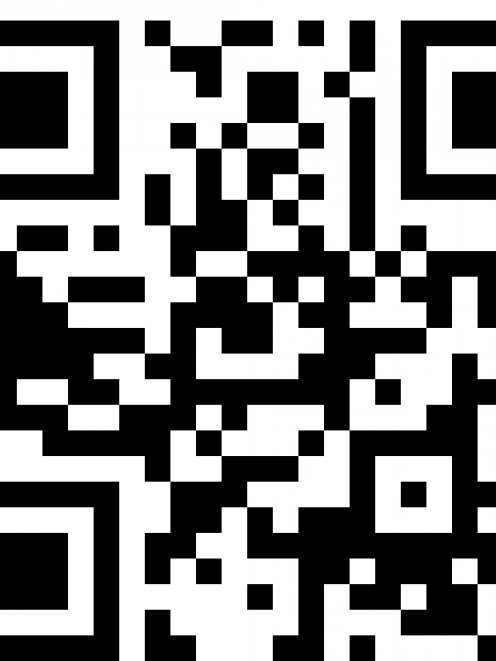 A QR barcode, which leads to the google.com site.
It used to be that the only time you'd notice a bar code was at a store, maybe when a cashier scanned your groceries. But lately bar codes are showing up in more places around town - and getting more sophisticated.

You might have seen one cousin of the traditional bar code: Known as a QR code, this jumble of little squares randomly arranged within a larger square is popping up on everything from bus stop billboards to restaurant windows.

If you spot one and snap it with your cell phone camera, the device can show you a website, photo or video related to the advertiser.

For example, Google is giving businesses stickers with QR codes that passers-by can scan. That brings up a link to a mobile version of a Google page where the business can post coupons and information about themselves.

Soon the codes could lead to other avenues for connecting with customers in ways businesses can measure and control. That could help them target advertisements to the people who are most likely to respond to their entreaties.

Earlier attempts to get consumers to scan bar codes that link with the Web didn't get much traction. The 1990s brought the CueCat, which let publishers append their printed material with bar codes that people could scan with a handheld reader if they wanted to be taken directly to related information on their computers.

The QR code (short for "quick response") also was released back in the '90s by Japanese scanning equipment maker Denso Wave Inc.

What has changed now, though, is that consumers are increasingly engaging with their mobile devices for more than making phone calls, texts and checking e-mails. And smart phones can easily download scanning applications that make it possible for product codes to leap from store shelves to the wider world.

The bar code on your box of cookies encodes a string of numbers horizontally that a bar code reader matches with information from a central database. That's how the supermarket scanner identifies the product you're buying.

These other codes, such as QR codes, can represent data horizontally and vertically. That means they can include much more information in a smaller space, and some of them can tell the scanning app on your phone all it needs to know about which website or video to pull up, without needing to consult a database.

It's unclear how many of these codes are out there, but potentially billions could be created.

Google has been using QR codes since late last year to help promote hundreds of thousands of businesses in its local listings service, known as Google Places.

The company has sent the businesses decals for their windows that say, "We're a Favorite place on Google" and include a QR code at the bottom.

The idea stemmed from Google's desire to have more of a physical presence with businesses and consumers, says Ryan Hayward, a product marketing manager for Google Maps who is heading the rollout of QR code stickers.

For now, the codes lead to the mobile version of a business' page on Google Places. Eventually, Google might use the technology to pull up videos and lead to application downloads, Hayward says.

QRs aren't the only two-dimensional codes that could catch on: Since March, movie ticket site Fandango has allowed some filmgoers to get tickets on their phones in the form of similar-looking "Datamatrix" codes.

The on-screen code is then scanned at the theatre. Users don't need to have smart phones for this to work.

Ted Hong, Fandango's chief marketing officer, says the company wanted to try the service because more and more people are accessing Fandango on their phones. And similar mobile ticketing efforts have worked outside the US.

For now, the new ticketing option is available at only a handful of theatres, all run by Reading Cinemas, in states including California, New York, Texas and Hawaii.

For a wider rollout, more theatres would have to invest in handheld scanners that are different from the ones they already use to scan traditional bar codes on tickets that consumers buy from Fandango and print at home.

Those bar codes won't fit on some phone screens, which is why Fandango is using the Datamatrix codes, Hong says.

Michael Surtees, 32, a Web designer who recently tried Fandango's new ticketing method in New York, says it was more convenient than printing a ticket at home because he always has his iPhone on him.

He also has found himself scanning QR codes he sees around the city. In some cases it's just easier for him to scan a code and get to a web site than it would be to manually enter the address in the iPhone's browser. Beyond that, he likes that each new code offers a bit of mystery.

"At this point, there is certainly the unknown of what you're going to get by scanning it," he says.

A new company called stickybits encourages consumers to download a cell phone application that lets them link videos, music and pictures to everyday bar codes like the one on a can of soda.

For example, using a phone running Google's  Android operating software, I scanned the bar code on a bottle of moisturizer on my desk and used my phone keypad to add a silly message: "Yay, moisturizer!"

Later, when I scanned the code on the same bottle, the phone showed that someone in Atlanta had scanned another bottle of the same product (which would have the same bar code), and augmented my message with a picture of her presumably well-moisturized left hand.

Sure, there's no huge point to this, beyond whimsy and the chance to trumpet your opinion about a product. However, Stickybits envisions that businesses would pay the company to use its service to create large numbers of codes with specialized content.

Billy Chasen, stickybits' founder, says the idea arose because he wanted to use phones to bridge the gap between the digital and physical worlds and let people see what others are thinking about objects.

Chasen says stickybits decided to make use of the traditional bar codes because people are familiar with them. Even so, Stickybits' app will work with QR codes as well.

That means you can attach your latest YouTube masterpiece to any QR code and others who are also using stickybits' app would be able to find it in the wild.

Chasen also imagines people putting stickybits bar codes on business cards and resumes to link to videos of themselves.

"I couldn't see why there should be any reason for this gap between the digital and the physical world," he says. "The digital world is so useful to us."