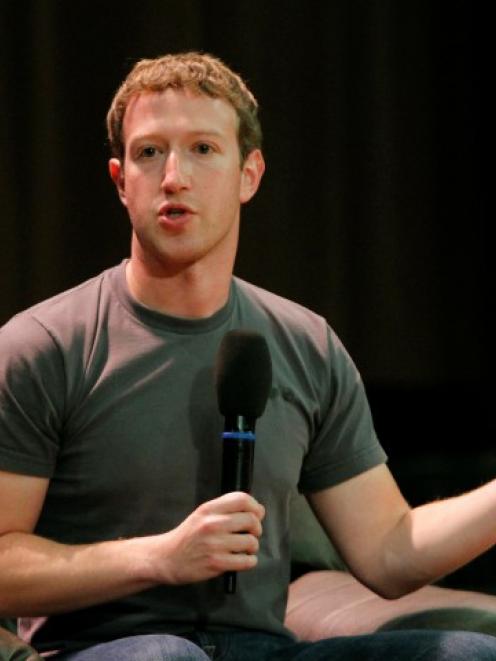 The No. 1 social network has faced a rough road since its May initial public offering. Investors and analysts have fretted over a sharp slowdown in revenue growth and questioned how Facebook will make money from users as people access its site on mobile devices.

Facebook shares have lost more than 40 percent of their value since the stock debuted at $38.

Facebook, based in Menlo Park, California, hit the 1 billion milestone on Sept. 14 at 12:45 p.m. Pacific time, the company said on its website. This is up by 45 million users since June.

It said it had 600 million mobile users, according to a fact sheet the company posted.

In an interview on NBC's "Today" show broadcast on Thursday, Zuckerberg was asked by co-anchor Matt Lauer about how, with 1 billion users, the company wasn't "killing it," by making money.

"I think it depends on your definition of 'killing it.' I mean we are making billions of dollars," Zuckerberg said. In its last earnings report, Facebook said revenue increased by 32 percent to $1.18 billion in the second quarter.

The 28-year-old CEO talked about the growth potential from mobile users. "There's 5 billion people in the world who have phones, so we should be able to serve many more people and grow the user base there," he said.

In September, Zuckerberg said the company's new mobile ads were delivering better results for advertisers than its traditional ads on personal computers.

As for his own phone habits, he said he has several devices, but recently had been using an iPhone 5 he received from Apple CEO Tim Cook.

Zuckerberg acknowledged that morale at the company could be better but that its 4,000 employees remained focused on building and improving Facebook's products.

"We are obviously in a tough cycle now ... that doesn't help morale," he said.

The 1 billion user count is up from the end of June, when it had 955 million active monthly users.

Zuckerberg, Chief Operating Officer Sheryl Sandberg and board member Marc Andreessen have been courting investors this week with appearances on the CNBC business channel and on panels at a high-profile advertising conference in New York. It also unveiled a video touting Facebook's connection with people across the world.

Facebook has rolled out a spate of initiatives to spur more growth, including a new advertising platform and measurement methods to show companies they are getting their money's worth with Facebook ads.

The company also said on Thursday it has seen 1.13 trillion "likes," or endorsements by users, since it launched the feature in February 2009. Many advertising campaigns that companies conduct on Facebook are designed to garner "likes."

Analysts were not surprised by the timing of the milestone. Hudson Square analyst Dan Ernst said Wall Street had expected Facebook to hit 1 billion in the third quarter.

But it still faces the task of making money from its user base, Ernst said. "The key, of course, is monetization of those users," Ernst said.

The median age of a Facebook user was 22, it said, and the top five user countries were Brazil, India, Indonesia, Mexico and the United States.

The new data came a day after the company said it was letting U.S. users pay a fee to boost the visibility of their postings - the latest effort to look beyond advertising for revenue.

Advertising accounted for roughly 84 percent of the total revenue in the second quarter.

With Facebook's revenue growth rate slowing sharply in recent quarters, analysts and investors believe it needs to find new ways to make money and Facebook has been rolling out new products to generate revenue.

Last week, Facebook unveiled a feature that lets U.S. users buy and send gifts such as eyeglasses, pastries and gift cards to friends, signaling its intent to play a bigger role in e-commerce.