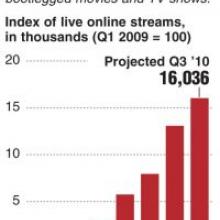 But the 19-year-old junior didn't see it in a way that would yield ratings points for Time Warner's premium cable channel. She caught the final episode on her laptop using Megavideo, one of a growing number of websites in the vanguard of a new wave of Internet piracy.

At least 1.25 million others did the same thing, according to estimates from one firm that monitors online traffic.

Megavideo and other sites like it offer a vast unauthorised selection of popular television shows and movies that can be watched with the click of a mouse, using the same streaming technology found on mainstream sites like CNN or Hulu.

It demands none of the time or technical sophistication required to download a video file via BitTorrent or other file-sharing technology.

Streaming video is the most visible sign of how internet piracy has evolved since the days of Napster and its imitators.

The new digital black market combines "cyberlockers," such as Megaupload and Hotfile, which piracy experts say hold stores of pilfered content, with linking sites such as TVDuck and TVShack.cc, that act like an underground version of TV Guide, helping people locate bootlegged TV shows and movies.

Some of these linking sites even contain reviews and recommendations that lend a patina of legitimacy.

The growth of streaming pirate sites has been nothing short of arresting. One independent measurement service documented a 42 percent jump in the number of infringing sites with streaming capability from July to August, sounding alarms throughout Hollywood.

Technological leaps in the living room are heightening anxiety further, with manufacturers expected to ship 27.7 million televisions and 55.7 million media players with internet connections this year alone, according to global projections from researcher iSuppli.

Software, including Google TV, makes it possible for viewers to search for and find video on the web - including unauthorised streams (a Google spokesman said the company provides tools for rights holders to remove links to infringing content).

File-sharing remains the primary source for pirated digital copies of songs, movies, TV episodes and video games. But use has stagnated as media companies have enjoyed greater success in crippling or shutting down popular sites such as Mininova and Isohunt, said Eric Garland, chief executive of BigChampagne, a media tracking firm.

Streaming and downloading from so-called cyberlockers are on track to surpass peer-to-peer use by 2013, according to the Motion Picture Association of America, Hollywood's lobbying arm.

"It's not larger than peer-to-peer, but it's growing faster," said Lawrence Low, a vice president of strategy with BayTSP, a technology company that works on behalf of entertainment industry clients in identifying unauthorised content online.

"Live streaming, in particular, is doubling in the last two years."

The financial damage to the industry is hard to quantify. The federal Government Accountability Office threw up its hands in April, writing that it couldn't accurately estimate the losses because of all the assumptions required to make up for the lack of data - such as estimating how many consumers would have purchased something they pirated.

The fear is nonetheless palpable throughout the entertainment industry. Executives worry that improvements in internet speeds and in the software that compresses movie files into easy-to-distribute packages are making matters worse.

"It's made streaming a lot less clunky than it was even three years ago," said Darcy Antonellis, president of Warner Bros. Technical Operations.

Some of the sites that provide links to pilfered digital content lack any whiff of the illicit.

"It may be the case, in some instances, that people are viewing content from these sites believing they're legitimate sites," said Daniel Mandil, the MPAA's general counsel.

"That's obviously part of the business model that these sites want to create the impression of legitimacy."

Take, for example, Sidereel, which offers users the ability to watch "every show on the web."

The site includes ads from Macy's department store, the National Football League and even from the NBC broadcast network, which is using the site to promote Jimmy Smits' new fall series Outlaw.

It contains features common to entertainment sites, including Top 10 rankings, recommendations and a fall TV preview with descriptions of upcoming shows.

Anti-piracy experts describe Sidereel as a linking site that directs viewers looking to watch popular shows that aren't available free online - such as HBO's True Blood or Showtime's Dexter - to cyberlockers such as Megavideo, which hosts streaming video files.

Chief executive Roman Arzhintar said Sidereel was nothing more than a specialised search engine. It points people to relevant content, including such legitimate sources as Amazon.com, iTunes and Hulu, and it immediately removes links whenever it receives notice that it is directing people to infringing content, he said.

"From my standpoint, Sidereel's main goal is to help people find the content they're looking for and to track the content so they can keep watching," Arzhintar said. "I can't stop the consumer from searching for stuff."

Technology exists to solve the problem it enabled.

But some sites prefer instead the procedure spelled out in copyright law, which requires them to remove infringing content within a reasonable period of time after being notified by the rights holder.

Time is of the essence, however.

"If something is really in high demand, you've got the whole world connected via social media, blogging, Twitter," Atkinson said. "Almost in real time, I can post something to a site and do a worldwide shout-out about my posting."

A quick removal, Atkinson said, "can mean the difference between a hundred views, which is fairly good containment, and hundreds of thousands of views."

To strengthen the government's hand against online piracy, Senate Judiciary Committee Chairman Patrick J. Leahy, D-Vt., and senior Republican member Orrin Hatch, R-Utah, introduced a Bill that would give the Justice Department more tools to track and shut down websites devoted to providing access to unauthorised downloads, streaming and sale of copyrighted content.

Federal law enforcement has also stepped in to try to disrupt piracy, but can only make limited headway given the proliferation of streaming sites.

US Immigration and Customs Enforcement this summer shut down seven websites for copyright infringement as part of Operation in Our Sites, and seized internet addresses and bank assets.

Six of the sites, including Movie-Links.TV and PirateCity.org, were linking sites that directed users to unauthorised copies of films such as Toy Story 3, Iron Man 2 and Prince of Persia: The Sands of Time.

The seventh site was a cyberlocker, ZML.com, that stored illegal content - including Shrek Forever After, an animated film still in theatres at the time.

"They really were the top offending sites," said Erik Barnett, assistant deputy director of ICE. "That's why they were specifically targeted for the first enforcement action."

But Schruers cautioned against demonising the technologies.

"There are neutral utilities on the web - either search or email or hosting - which can be used both for entirely legitimate purposes, but they can also be used for infringing purposes," he said. "We provide safe harbours for those service providers, because we expect the majority of the time that service is going to be used for legitimate purposes."