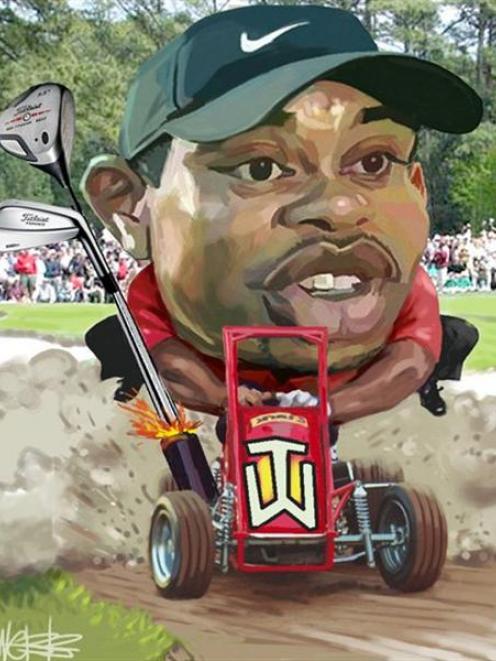 Tiger Woods
Among all of the buzz words about "light-speed DNS" and "real time", few events have driven home the point of just how fast technology and its users are.

The Tiger Woods saga was a hole-in-one for the internet's quick turnaround time.

The fairly simple distraction has players guide a cartoon Tiger Woods in his SUV, with a supposed mistress seated beside him, down a street.

A character portraying his crazed wife chases them on foot, golf club in hand.

Players must swerve to avoid various obstacles, including trees, trophies and babies.

Concept art and planning were drawn up as news media buzzed and shot at every angle, be it police statements or gossip.

By the next night, Tiger Hunting was online and being promoted on Holy Taco, a Break-owned men's humour blog.

A four-day turnaround, and even then, Break was taking its time.

"If we had a sense of urgency, if we wanted to, we could have put it up quicker," Break's chief technology officer Nick Wilson said.

Break employees and friends spent a day testing and discussing the game and whether theyhad gone too far.

"Should he run over the baby, yes or no?" Wilson said, reminiscing about internal discussions.

He's referring to a cartoon tot, one of the road obstacles.

The game is just one more contributing factor to a culture steeped in the story of the moment.

Its silly execution allows Break to get away with some moral bogeys.

"It's good not to take it too seriously," said Paisley, the developer.

The hospitalisation of Woods' mother-in-law gave media a reason to tee up the scandal for at least one more hole.

And it gives guys a reason to send one more tweet or one last email with a link to Break's game.

Another technology to piggyback on the world's Woods fixation came from a Taiwanese company that quickly built a computer-animated re-enactment of the scene.

The YouTube clip, which looks like something out of a recent version of the Sims game, has been viewed more than two million times.

"The Tiger Woods game "is the first of many more to come", he said.