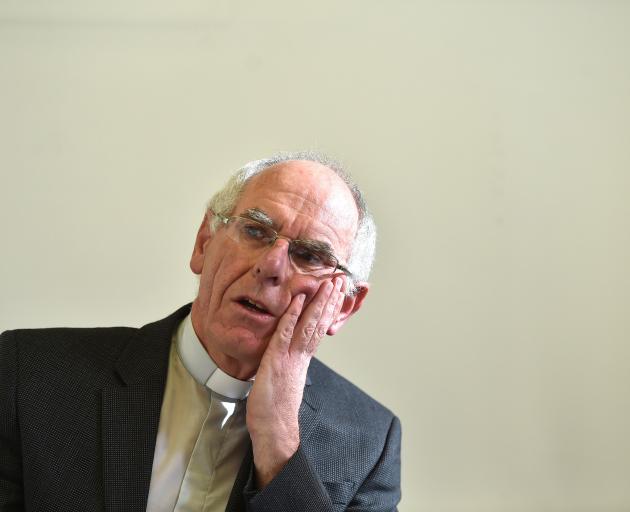 Bishop Michael Dooley speaking on the need to include churches in Royal Commission into historic abuse. Photo: Gregor Richardson
The Bishop of Dunedin has apologised to the city and asked for forgiveness, after admitting the Catholic Church failed to protect children from paedophiles disguised as men of the cloth.

And, as more victims continue to come forward, he has also added his voice to growing calls for churches to be included in the Government's upcoming Royal Commission into historic abuse.

Bishop Dooley said the reports had left him shocked and with a feeling of ''profound sadness'', but he did not dispute the details.

The publicity had already prompted ''a handful'' of previously unknown victims of Fr Murray to contact the Dunedin diocese office in recent days, he said.

They were speaking for the first time as a result of the recent ODT Insight coverage, he said.

The church also had to accept its share of the blame for the way it handled offenders, by moving them to new parishes and exposing more children to harm, Bishop Dooley said.

''We didn't do as good a job as we should. I have no problem at all in apologising for the people who have suffered for the way we have handled it.

His comments also followed the release of a grand jury report in Pennsylvania, which showed 300 clergy abused more than 1000 children - and potentially thousands more - over decades.

The global headlines had prompted a scathing letter of condemnation by Pope Francis to the world's 1.2billion Catholics on Monday, in which he condemned both the ''atrocities'' of child sex abuse and cover-ups by the church.

''We showed no care for the little ones; we abandoned them,'' he said.

Bishop Dooley said yesterday the offending and systemic failure highlighted in Pennsylvania was on a different scale to that in Dunedin, but ''there will be more'' victims hidden within the Dunedin diocese.

In Pennsylvania, the Catholic Diocese of Harrisburg had responded by naming alleged offenders and announcing it would strip the names of bishops who failed to act from church properties.

Bishop Dooley said a similar course of action could follow in Dunedin, including renaming Kavanagh College, but only if an independent inquiry - such as the Royal Commission - found evidence to support such a move.

''If it came out that there was credible evidence, then that would be a case for doing something,'' he said.

The latest revelations in Dunedin had also strengthened his belief churches needed to be part of the upcoming Royal Commission, he said.

An independent inquiry was needed to interrogate churches' responses to sexual abuse and lift the ''shadow'' from them, he believed.

That had been the view of all New Zealand's bishops since March, but ''I would say it is firming up'', he said.

''There's no use us doing it ourselves ... we would be seen as policing ourselves.

''If there's any questions, then we do need to have a state inquiry.''

In the meantime, Bishop Dooley said there was now a need for ''healing and reconciliation'' within the Dunedin diocese.

He was considering a ''liturgical gathering'' as a way of ''acknowledging the abuse and acknowledging our failings''.

Parishioners had been speaking directly to him, and to other priests across the diocese, either to vent or just to talk, he said.

''There's been support - people coming up and saying 'We know you're going through a tough time' - but there's also people who want the church to be transparent, and to deal with it in a just way.''

The fallout had been felt by the diocese's priests as well, he said.

''It's probably the one issue that's had the most impact on the morale of priests, because it's indefensible. You can't defend it, the abuse of minors, of children.''

Haven't really been following this story, haven't read the articles. Being a non religious type of person when is the full force of the law going to rain down on these sicko's.