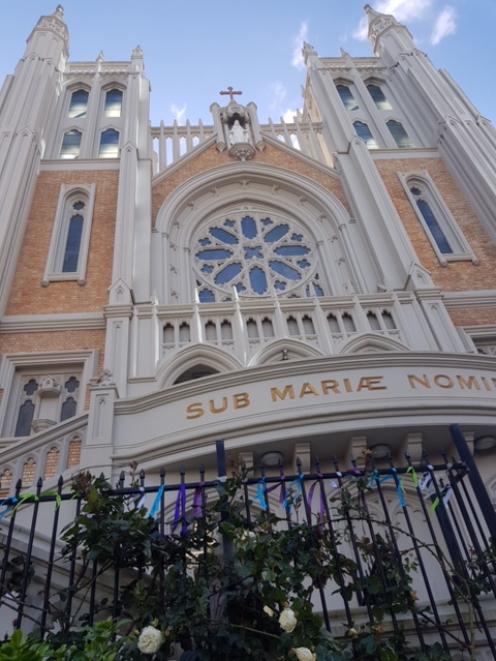 Fr Conroy confirmed he had cut the ribbons off the gates after finding them early in the morning. Photo: Dr Murray Heasley
A Wellington priest has backed down and agreed to allow ribbons from the survivors of sexual abuse to adorn a church in the capital.

Fr Kevin Conroy, the Marist Fathers parish priest at St Mary of the Angels in Wellington, caused outrage this morning when he cut off ribbons left on the church gates by survivors of clerical sexual abuse.

About 50 ribbons, signed by victims and their supporters, had been tied to church gates on Thursday, but cut down early this morning by Fr Conroy.

Dr Murray Heasley, a spokesman for the Network of Survivors in Faith-based Institutions and their Supporters, said he was "astonished and dismayed'' by Fr Conroy's actions.

He contacted Fr Conroy this morning to protest, but the priest told Dr Heasley the "heritage'' status of the church precluded the placement of ribbons.

Fr Conroy did not return an Otago Daily Times call, but Dr Heasley recorded his conversation with the priest.

In it, Fr Conroy confirmed he had cut the ribbons off the gates, because the "policy'' was not to permit anything to alter the appearance of the church.

"People dump pamphlets without permission, people put rubbish in our gardens, glass, vomit, whatever. And so we're forever trying to keep the place looking like it

"I don't want anything tied up without permission. And I'm not sure whether permission would be granted because of changing the look of the [church],'' Fr Conroy said.

Catholic spokeswoman Dame Lyndsay Freer, speaking for Fr Conroy, initially defended the action, saying removing the ribbons "doesn't mean they and the parish are in any way lacking in empathy or care for survivors of abuse''.

About 50 ribbons, signed with messages by victims and their supporters, were tied to the gates of St Mary of the Angels in Wellington last night. Photo: Dr Murray Heasley

But, as victims and their supporters expressed outrage and the ODT picked up on the story, the stance softened.

Dame Freer, speaking this afternoon, said Fr Conroy had "had a think about it'' and was now happy to see the ribbons reinstated.

That could happen as soon as tomorrow, and he would also be explaining their significance to parishioners over the weekend and saying a prayer for victims of sexual abuse, she said.

One Wellington survivor, who did not want to be named, said earlier today he was "absolutely outraged'' by the priest's actions. 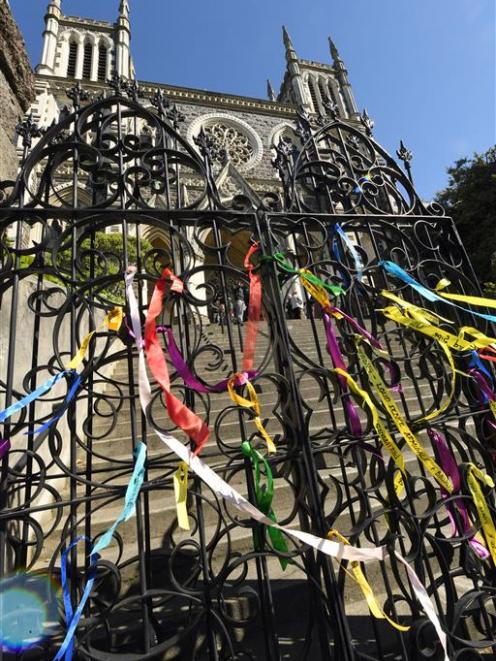 Ribbons of remembrance from around the world were tied on the gates of St Joseph's Cathedral in Dunedin last month. Photo: Stephen Jaquiery

The survivor and a friend, who was also abused, had tie their own ribbons, and those from other people, to the gates as a show of support for victims.

It was part of a series of ribbon-tying events being organised by the Network of Survivors in Faith-based Institutions and their Supporters, which began at St Joseph's Cathedral in Dunedin last month.

Dunedin Bishop Michael Dooley and Monsignor John Harrison were among those to tie ribbons in Dunedin, and they remained in place.

The Wellington survivor said it appeared Fr Conroy "didn't want the embarrassment of the public voice being spoken''.

"These ribbons represented our voices.

"Our ribbons were flying in public. They were speaking to anyone who saw them, and they took them down.

"This is a public insult. It's worse than re-traumatising. It's telling us . . . that they're worthless. That we have no voice.''

The church "policy'' was not to permit anything to alter the appearance of the church. Photo: Dr Murray Heasley

Did he personally cut them down?

The way things look, as opposed to pastoral mission, is not Church History. The church was a centre of cities. People slept, ate and celebrated in the church, often during mass.

You don't have to be European , or Latin, but it helps.