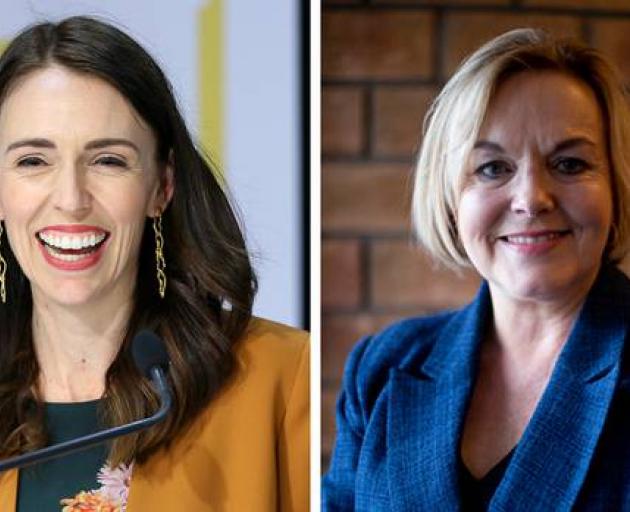 Instead, Collins chooses to only publicly refer to Ardern as the Labour leader or, in the House, as the Prime Minister – never saying her name.

Asked why she does this, Collins said she was only doing what Ardern did to her.

According to the National leader, Ardern refuses to publicly say her name as well – instead, calling her either the opposition leader, or the leader of the National Party.

Collins' unwillingness to say Ardern's name was on full display this morning when she was speaking to a business audience in Wellington.

On a number of occasions, Collins would only call Ardern the Labour Party leader, or some variation of that title.

And, speaking to RNZ this morning, Ardern made a number of references to "the Opposition".

In the post-Cabinet press conferences she's had since Collins took over as National leader, Ardern has also been reluctant to name-check Collins.

The election is now just 46 days away and all major parties have been in campaign mode for weeks.

This is the last week Parliament is sitting, before it adjourns for the campaign.

Both Collins and Ardern will be hitting the campaign trail full time after Parliament wraps up on Thursday night.

But Collins was not wasting any time this morning.

Much of her speech was focused on the areas she thought the Government was getting wrong.

Asked at one point by a member of the audience what aspect of the job she would enjoy most about being Prime Minister, Collins said: "Bringing back hope."

"I am seeing an awful lot of fear being spun by the current Government," she said.

"Fear that we [National] would open the borders ridiculously or we would let Covid-19 into New Zealand."

Collins said that in reality, National had "zero tolerance" for Covid-19 – "I'm not letting that stuff in."

"In addition to that, it's hope about what we can do – we don't have to sit there receiving benefits … if there is something else we can do."

But she acknowledged that the Government would have to borrow more money to help the country get through Covid-19.

A National Government, however, would pay off that debt quicker, Collins said.

Speaking to RNZ this morning, Ardern was critical of National's debt recovery plans.

National wants to bring debt down to 30 per cent of GDP within 10 years – that's much faster than the Treasury's current projections.

According to the Budget, Government debt will peak in 2024 when it hits $219 billion (just under 60 per cent of GDP).

Ardern said this morning that for National to achieve their target, it would be $80 billion worth of cuts.

"I will not have the next generation pay through austerity measures that mean we are unwilling to support them into jobs and making sure they have income support."

Why is it that Labour governments actions to help the poor, only create more while leaving the next generation with government debt, while National governments actions are focused on business and sparing the next generation of government debt, yet the media project Labour as 'for the people'.
Sure, Labour knows how to spend money but it's focus is to snare the voter into dependency on them, not to strive for the voter to be financially independent.
That is what socialists do to hold power !

Your opening comment is expressed as a fact without any supporting evidence. . You're not fooling anyone. The facts are that Labour Govts have a history of caring about NZ, not limiting themselves to privileged sections of the community. Every major social and economic initiative that NZ has made in the last 50 years, almost without exception, have been implemented by Labour. Labour believes that stimulating the economy is best served by putting more money in the hands of the ordinary people. They spend it which encourages companies to invest in development and employ more workers. Putting more money in the hands of the elite simply means that it gets put into speculative ventures which do nothing for growth. National bashes beneficiaries and wage and salary earners and give a free pass to tax dodgers, deadbeat dads. Your final comment is nonsensical. Social programmes do not equal socialism. Socialism is about state ownership and control of the means of production. Labour, followed meekly by National have created the freest economy in the world. There is nothing socialist about Labour.

IRD: "Labour believes that stimulating the economy is best served by putting more money in the hands of the ordinary people. They spend it which encourages companies to invest in development and employ more workers. Putting more money in the hands of the elite simply means that it gets put into speculative ventures which do nothing for growth."
That's a communistic ideology. Taking money away from people who know how to invest it properly and giving it to those that don't simply to spend is not a good idea.
Also, all businesses that create jobs that keep people fed are speculative. Those business ventures that are bad fail, those that are good survive. You end up with the rich being those that make good business decisions.
What you want is to funnel money to those that don't make good business decisions. Communism does not work IRD.
Labour have only been able to do the things they've done because of National keeping the economy on an even keel. What Labour does is usually destructive to the prosperity of all.

Thank you for the benefit of your wisdom Mark. However I take issue with you on a number of points. I said nothing about taking money away from people. I said give the money to people who will spend in in the local economy. It's a strategy that took the world out of the great depression, It is not communistic ideology, totally the opposite. It was called the "New Deal" in the USA and it was picked up and driven by Savage's Labour Govt in NZ. Look it up. The "New Deal" was recognised internationally as highly successful and was part of the reason why Govt's using it were so long lived. Labour is currently following the principles of the "New Deal". Those principles are as successful now as they were back in the 1930's. I know communism doesn't work, history has shown that all those who've tried it have failed. We do agree on that. As to National keeping the economy on an even keel, rubbish. In their last 9 years in power they ran 6 years with budget deficits, all while they ran a so called "rock star" economy! It's been a long time since any Labour Govt ran a budget deficit, don't try and tell me that National is the party of economic wisdom. It's absolute nonsense.

The National mindset is that only those in business know business.

Business is a waged economy that enables wage earners to support business.

Business is not a hermetically sealed elite and a Round Table.