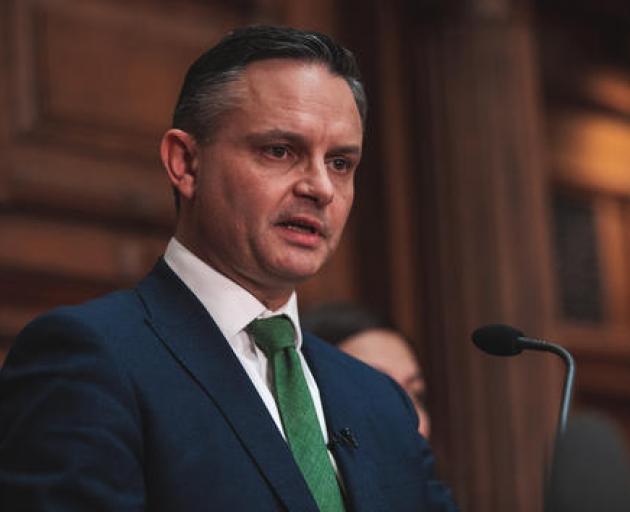 Green Party co-leader James Shaw. Photo: RNZ
The Greens are prepared to forego a coalition or confidence and supply arrangement and sit on the crossbenches if post-election talks do not go their way.

Co-leader James Shaw made the comments on Thursday, saying the only post-election deal that was off the table completely was one which would give National power.

However, he said if the Greens held the balance of power it was "always a possibility" that it would walk away from negotiations with Labour if they could not get the gains they wanted.

If there was no coalition or confidence and supply agreement, that would force a minority Labour government to seek the Greens' support for legislation on a case-by-case basis.

He wouldn't say what the Greens' bottom lines in those talks were, but said a wealth tax was a "top priority".

He would also be pushing for co-leader Marama Davidson to be a minister and suggested a Green MP hold the agriculture portfolio.

Shaw said a new Labour-led government would need to be in partnership with the Greens for it to be truly transformational.

"I think, in the next Parliament if Labour and the Greens are able to form a government together, then you will see a truly progressive government for New Zealand."

But Shaw said the Greens would struggle to work with NZ First, adding that the Greens' preference was "clearly" a government without that party.

Shaw renewed his criticism of New Zealand First, saying the party has been "extremely difficult, quite chaotic and not a force for moderation inside the Government," during this term.

If the Greens were in a position to negotiate a post-election deal, Shaw said it would be up to the party's members to give any deal the nod.

Last election, after NZ First decided to side with Labour, the Greens membership voted that their party would provide supply and confidence.

All three parties were needed to form a majority.

On current polling, the Greens and Labour could form a coalition government.

This would give the Greens leverage to ask for policies and ministers after October's election.

But Shaw would not say which ministerial portfolio his party wanted.

He did, however, say: "If you look at the policies we have released so far ... those give you an indication of where we want to be able to play a role in government."

He went on to specifically name-check its wealth tax policy as well as its minimum income scheme, clean energy and its upcoming agriculture policy.

Asked if the Greens wealth tax plan was a "bottom line," Shaw said that it was a "top priority".

Tax tax tax those who have worked hard and had a plan all their lives and made good decisions. Thats the plan and thats what will happen in negotiations. These guys only know how to make the country go backwards and should be declared dangerous