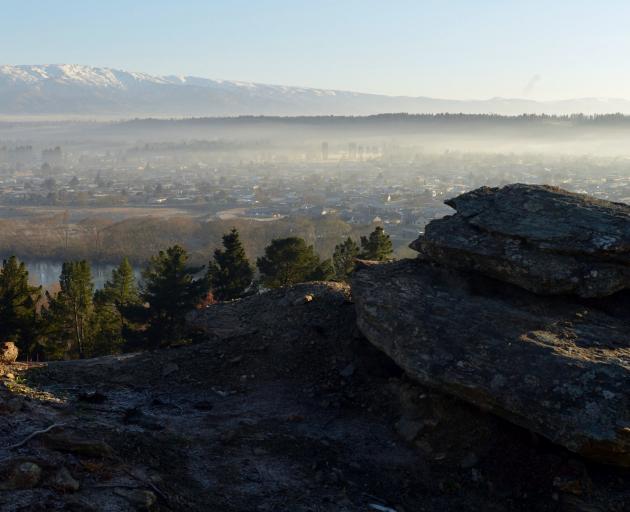 Southern District Health Board medical officer of health Prof John Eastwood says although a ban on woodburners in some Otago towns, such as Alexandra, will improve public health, it must not come at the cost of warm homes. PHOTO: STEPHEN JAQUIERY
A ban on woodburners might be needed to improve health in smoky Otago towns, the Southern District Health Board (SDHB) says.

However, he said the Otago Regional Council should consider banning solid-fuel burners in towns where residents could be inhaling dangerous smoke particles.

People who were routinely exposed to high wood smoke concentrations were at increased risk of poor health, he said.

He confirmed the SDHB was asking the council, though its submission to the council’s overarching regional policy statement, to consider ‘‘the option to ban solid fuel burners altogether’’.

He said if the regional council was to look at phasing out solid fuel burning for home heating, the council would need to ensure a reliable electricity supply was available to those communities.

But when Cr Michael Laws asked Mr Scott if he was aware low-emission burners did not significantly lower the concentrations of dangerous smoke particles in the air, he said that was the reason the SDHB wanted consideration of a total ban.

Council policy and planning manager Anita Dawe said the proposed regional policy statement did not include any provisions that would ban home heating with fires.

She said a relevant policy in the proposed regional policy statement required phasing out household solid fuel burners that did not comply with the standards set in the national environmental standards for air quality.

The regional policy statement sets the direction for management of Otago’s environment; it does not contain rules.

Instead, it establishes the framework for regional and district plans, which set the rules.

Ms Dawe said how non-compliant burners were phased out would be determined through the council’s air plan review.

After regional policy statement submissions closed next month, there would be a period for further submissions, at present planned for October.

Then the proposed regional policy statement would go through the new freshwater planning process.

A public hearing of submissions on the regional policy statement would be conducted by a freshwater hearings panel.

Following its deliberations, the panel would make recommendations to the council.

The new regional policy statement was expected to be made operative in the first half of 2023, she said.

It is good the SDHB is looking to improve the health of the region into the future. Once this task is accomplished perhaps they could look at solving problems of the present ... the sorts of things that turn up with depressing frequency on the pages of the ODT.

Triage. Health of the region first.

Exemptions should be considered for existing homes as many older homes may become unlivable as the woodburner may be the only suitable damp free heating.

Unfortunately our politicians and council staff are once again demonstrating an unacceptable level of ignorance as guardians of our environmental health. The health affects of contaminated air have been proven beyond doubt by public health experts. In 1956 (65 years ago) the Clean Air Act was enacted in the UK to address poor air quality. The act banned the use of certain fuels and created “smokeless zones “ in towns and cities. It beggars belief that Otago is still living in the “dark age” as far as environmental protection is concerned. Once again, as with the management of water quality our Councils are not up to the job and need replacing with informed competent decision makers and enforcement.

All very grand for Prof Eastwood on his big salary. What about the cost of to the low income of installing new systems?

Agree, and the cost of electricity to run them.

At what point are people going to stop looking at how to regulate EVERYTHING and let the average person live their own life !

There are countries in the world causing far more damage to the planet, and NZ's miniscule efforts will not realistically help against them. A start would be to not buy all the cheap stuff from China that is easier and cheaper to replace than fix.
If their economy was reliant on the rest of the world and the rest stopped buying until they change their pollution policy, we might only then see change.

Is the SDHB going to pay for everyone's power bill, or are people just going to freeze to death without fires?? these people are complete moron's. yet again ideology gets in the way of common sense

Great !!! The DHB are going to give free heat pumps to everyone in the :smoke-free" areas.

a) In another article in this edition, electricity prices are 3 times higher than they should be, even with the dams having above average storage levels.

b) In some areas, the temperature goes that low a heat pump is virtually useless.

c) Even though there's a dam generating adequate power within 100 kilometres, Aurora Energy have done no maintenance on there infrastructure, so power lines break and polls fall over.

This issue has been raised before and unless the powers that be come up with a viable alternative at a realistic price so that it's affordable to those who can least afford it, e.g. elderly, disabled, or other health issues, you just can't slap a blanket ban over such a wide area.

What needs to happen is, the DHB needs to get their act together and concentrate on the more pressing issues like fixing a hospital that's in total meltdown, fix the nursing dispute, come up with a plan to keep people coming into the emergency room and waiting 8 hrs or longer to be seen, and don't try to divert attention away from the problems of today, fix them first !

Woodburners are great in that they provide a layer of redundancy for heating and cooking in rural areas. Storms earthquakes etc can down the electrical grid then you're stuffed otherwise

US $8 billion (3.3% of the world’s total GDP) lost each day from reduced life expectancy, premature birth, illnesses that result in hospital visits and missed work, and financial burdens resulting from illnesses related to air pollution.
40,000 deaths of children under five every year from PM2.5 exposure.
The cost of reducing air pollution by switching from polluting fuels to zero-emissions alternative energy sources may seem high. But the health costs and economic costs of air pollution are clearly much higher.

In 2016 Environmental Health NZ estimated that there were around 1300 premature deaths, 236 cardiac hospitalisations, 440 respiratory hospitalisations and 1.49 million restricted activity days in NZ. Unfortunately air pollution tends to be caused by a minority but everyone is affected. Bleating about the cost will not fix the problem. If Councils were lead and managed by competent leaders, rather than spending over $20 million on new offices ( which could buy 10,000 heat pumps) or tens of millions on minority use cycle ways, those resources would be used where they have the greatest impact. However, we do get the leaders we deserve!

Thats a big NO from me.

Electricity is too expensive and unreliable (thanks in no small part to past Aurora management incompetence and the owner DCC dividend gouging).

Heat pumps are not up to the task during the cold spells in Central Otago and pellet fires, diesel burners etc. are reliant on electricity to operate.

The toll on health would be greater due to cold and damp homes, so get off your hobby horses, stop your grandstanding and putting forward non viable alternatives.

"He said if the regional council was to look at phasing out solid fuel burning for home heating, the council would need to ensure a reliable electricity supply was available to those communities" not only reliable but affordable, too many people are afraid of switching on the electrical heating for fear of what the power bill is going to cost...

Just wood? What about coal? I requested this at an ORC public meeting 10 years ago. Having lived in a town that made these changes in the 1960's I know it can be done. You can still keep warm by other means.