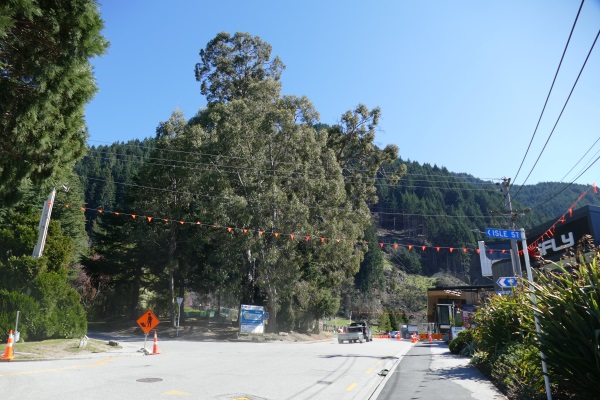 One of the eucalyptus trees, centre, earmarked for removal by the Queenstown Lakes District Council. Photo: Mountain Scene
Queenstown arborists are outraged over the local council’s plans to remove eucalyptus trees on the corner of Brecon St and Cemetery Rd, and are outright refusing to do the work.

Brecon St is part of the council’s town centre upgrade project, which council confirms requires the removal of five eucalyptus trees to make way for a 4-metre shared path.

The removal is supported by the affected private property owner.

But one concerned, anonymous arborist contacted Mountain Scene to say the removal is ‘‘unjustified’’ and local arborists have been approached for quotes to remove the trees but have ‘‘collectively turned down the job’’.

White confirms the council has been declined a quote by three Queenstown tree removalists, and they’re currently waiting for quotes from contractors outside Queenstown.

The anonymous arborist believes the trees are some of the oldest species of eucalyptus in Queenstown, should be listed as protected, and should remain for aesthetic purposes.

While White agrees the trees ‘‘add to the aesthetics of the area’’, he argues they’re non-native and aren’t used for shade or shelter.

The council’s designers explored options to keep the trees and couldn’t make any stick, White says.

‘‘Trees are an important part of every community and we absolutely understand that removing established trees can be an emotive issue.

‘‘New native species will be introduced throughout the town centre as part of this programme at greater numbers than we currently have in the area.’’

But the arborist says there are more trees around the town centre at risk of removal, including a stand along Coronation Drive, some of which the arborist says are native, and more near the Fernhill roundabout.

“This, among the sheer amount of wilding pines being removed in the district, is piss-poor management when the world is in a climate crisis,” the arborist says.

With the changes in world tourism, I think it may be easier to leave the trees alone ... people can, if well trained, walk in single file which would only take up 2 meters.

Added to the fact that Jimbo is always complaining about how hard they're doing it in Queenstown and businesses will be closing up, is it logical to go spending a heap of money on a footpath that may never be used ?!

Instead of making a footpath, how about Jimbo and the team of 1%ers start making meals for the people in Queenstown who have lost their businesses, money, Aston Martins, Lamborghinis, Ferraris and Nissan Leafs ... these people must surely be starving and they can't eat asphalt, although a bit of shredded gum tree in a bowl with hot milk is apparently quite high in proteins and fibre.

The end is neigh ... Delta and the hundreds of more deadly mutations which will surely follow, will see the world population cut by 80% ... If you don't believe me, ask Donald Trump, the man's never wrong !!

And what about the carbon footprint ... using toxic chemicals in asphalt and cutting down trees that eat up CO2 ... not really a greenie are ya Jimbo ??

<<people can, if well trained, walk in single file>>

please be aware that it is not only walkers but people in wheel chairs and mothers with prams.

Me thinks the council should return to the drawing board...

I took these trees down on my house sections because they are prone to falling over.Smaller colourful trees such as maples are much better suited to Central Otago.That is what I planted together with Magnolias.