During the deliberations councillors voted to increase the council’s debt limit and exclude any income from the sale of council-owned properties from the plan. PHOTOS: PETER MCINTOSH
Asset sales are off the table but more debt will be needed to fund all the big-ticket items in the city council’s plans for Dunedin.

The Dunedin City Council’s draft 10-year plan is in part funded by $75million in extra debt and $63million in asset sales.

But the council voted to remove from the budget any income from property sales, during the first day of deliberations on the plan yesterday.

It also voted to increase the debt limit from $285million to $350million, meaning it will still be under the limit if all the major items in the plan, such as the bridge from the city to the harbour, are approved. 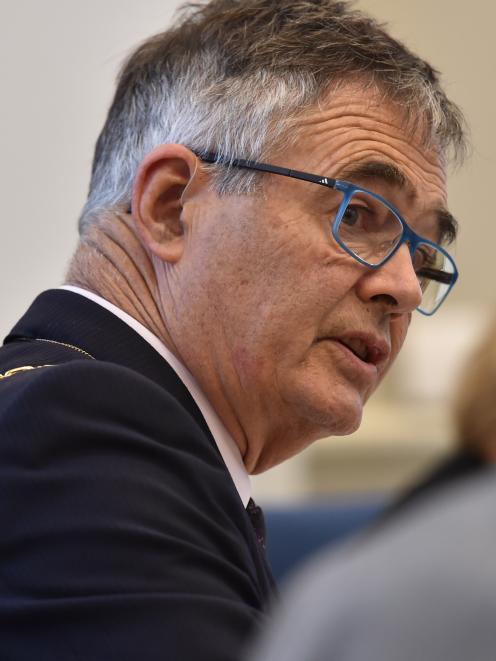 Mayor Dave Cull speaks during deliberations on the Dunedin City Council 10-year plan yesterday.
A target return for the council’s investment properties to cover the cost of the higher debt limit will also be developed before the 2020-21 annual plan.

The council’s debt is now sitting at about $203million.

The removal of asset sales and an increase in the debt limit are part of an amendment proposed by Cr Aaron Hawkins.

Cr Hawkins said the reason for the change was to spread the cost of major projects across different generations of ratepayers and also to save any asset sales for when they were needed.

‘‘My concern is that they [asset sales] are kept for times of need ... It seems crazy to me to be selling things that are returning more than the cost of borrowing money just because we want to keep within an arbitrary debt limit.’’

It was important to note the debt level was for the entire 10-year cycle given there were potentially large projects which were not being considered during the current 10-year plan process, he said.

Cr Lee Vandervis said he supported most of Cr Hawkins’ proposal but could not support raising the debt limit.

In the past when the council had set a limit, whether is was for rates or debt, it had either reached or gone very close to reaching the limit and it was very likely that would happen again, Cr Vandervis said.

Cr Vandervis voted against increasing the debt limit but the rest of the amendment was unanimously supported.

Mayor Dave Cull said in the past six years the council had handled its debt as well or better than any other council, which meant increasing the debt limit was still a prudent financial decision.

Cr Mike Lord said while he supported the proposal, the council should investigate selling some of its properties where there was a good reason to.

Council strategy and governance general manager Sandy Graham told councillors staff would still need to examine the changes so there were no unintended consequences.

As any decent accountant knows, expenditure rises to meet income. Or debt.

It's inevitable now that the DCC has raised the debt limit they intend to spend more of ratepayers' money, otherwise why raise it?

I will take great delight in voting all of these fiscal buffoons OUT at the earliest opportunity.