Q What is your latest exhibition about? 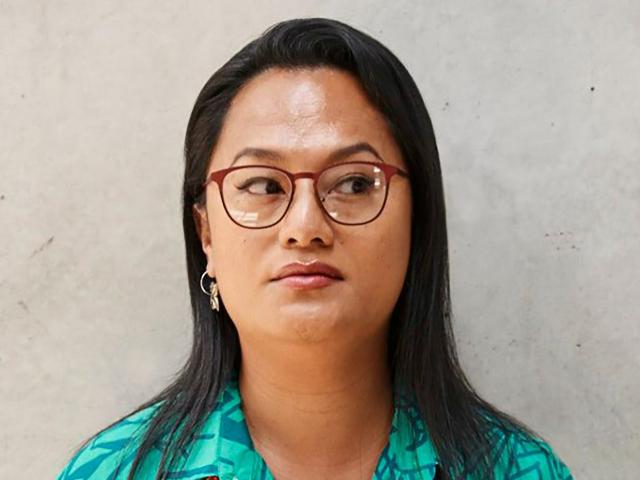 Yuki Kihara.
‘‘Samoa no uta, A song about Samoa’’ (2019–2023) is a title adapted from a popular Japanese song Samoatou no uta, meaning ‘‘a song from Samoa’’. Music textbooks for elementary school students in Japan feature the song.

Its lyrics describe the Samoan archipelago as a paradise on Earth settled by ‘‘noble savages’’ — a typically romantic, Orientalist imagining of occupants of neighbouring Pacific Island nations held by Japan, dating back to the 17th century.

The Samoan siapo (painted bark cloth) and the Japanese kimono are customary regalia which function as a repository of ancestral stories that shape our contemporary experience, thus inform how we might engage with the future. My work brings together these two distinctive cultural metaphors into a fusion that subverts the colonial gaze by shedding light on the lived experience in the Pacific, while re-framing the relationship between Japan and the Pacific and specifically Samoa, taking an indigenous interpretation of transpacific identity, gender and history, while referencing my own interracial Samoan and Japanese heritage as a point of conceptual departure.

The inspiration came from my Japanese grandmother’s kimono which is presented alongside the five ‘‘siapo kimono’’ at Milford Galleries. It took two years of researching and developing the siapo kimono, which involved, among others, travelling and meeting a variety of textile experts and curators between Samoa, Japan and New Zealand.

Q What was your reaction to being chosen as New Zealand’s representative for the Venice Biennale — the first artist of Pacific descent to do so? .

I was elated and humbled. I’m in Venice right now inspecting a variety of sites that could possibly host my exhibition given that New Zealand doesn’t have a permanent pavilion like other countries. It allows my work to generate a conversation I’m interested in having.

Q What has being the representative involved?

I’ll be producing new works for the 59th Venice Biennale 2021 and more information will be made available early next year.

Q You’re the research fellow at the National Museums of World Cultures in the Netherlands. What has that involved?

My fellowship looks at how the Pacific is perceived in the Netherlands and the trade routes established across the Pacific region by The Dutch West India company. The first European explorer to sight Samoa was Jacob Roggeveen, a Dutchman working for The Dutch West India company, in 1722. Scientists speculate that the ocean acidification in the Pacific region first began in the 16th century, which coincides with the arrival of Europeans.

Q What do you like most about the creative process?

Problem-solving is the fun part; I’m often bored of the work once I’ve made it.

Q How do you work out what format an idea or concept might take?

I’m interested in taking the audience on a journey, so I try and work backwards by thinking critically about how what I want the audience to take away from my work. As for my new exhibition, I hope to open up a space that addresses issues about cultural boundaries and the responsibilities that come with it.

TO SEE
Yuki Kihara, ‘‘Samoa no uta, A song about Samoa’’, Saturday until January 21.