In this week's Art Seen, James Dignan looks at exhibitions from Kathryn Madill and Valerie Hammond, Yuki Kihara, and a group exhibition from Nick Austin, Campbell Patterson and Ed Richie.

Kathryn Madill and Valerie Hammond's exhibition at RDS Gallery is best described as two interwoven displays. The art of the two artists is distinctly different, yet there are points of contact and the overlap can be clearly seen.

Madill's display consists of works continuing the artist's long-held fascination with colour and symbol. In half of the pieces, small iconic images have been painted on the old red book covers. The viewer is left to ponder the significance of the symbols, which include a bird silhouette in stark blue above a solitary candle flame and a half-submerged car juxtaposed with bare tree branches. The remaining works, a group of mezzotints and drypoint prints, continues the personal language and the use of deep colour. The fine lines of the printing emerge subtly from among deep crimsons and bold blues.

Hammond has created her own mythology in her work. The demi-beasts of ‘‘Chimeras and Metamorphoses’’ have been depicted using a range of different printing techniques and skills, and have drawn influence from sources ranging from traditional Japanese art and German maestro Albrecht Durer to the pioneering photographs of Charles Dodgson aka Lewis Carroll. These dreamscape creatures reach their zenith in the haunting multilayered image Sisters, with its twin owls and sepia-toned moths and flowers. 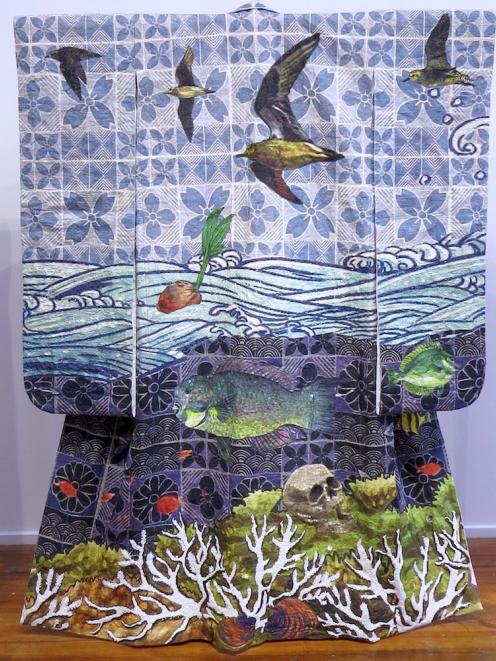 Yuki Kihara's ‘‘Samoa No Uta: A Song About Samoa’’ literally weaves together strands from the artist's Samoan and Japanese heritage.

The artist has used the formal style of Japanese kimono in juxtaposition with the traditional patterns of Samoan siapo cloth to create the backdrop for a multipanelled landscape of the islands. This landscape has been painted and embroidered across the fabric in a way that reflects traditional Japanese nihonga painting.

The resulting work is beautiful and intriguing. We see the multilayered connections and symbiosis with which these countries and others share the Pacific Ocean, and in the style of the work we see the process of cultural exchange which has for better or worse shaped modern Pasifika.

We can also however read a warning into this work, symbolically indicated by the floating soft drink can adrift on the waves. Reading the work from left to right, the idyllic paradise of the archetypical Samoa is about to become inundated by a Hokusai-esque tsunami of foreign influence.

The art, both of the seascape and of the creatures beneath it, becomes less Polynesian and more Japanese as the work progresses to the right.

Kihara's kimono are an impressive double-edged representation of all that is best and worst of cultural mingling, while simultaneously being a beautiful work of art. 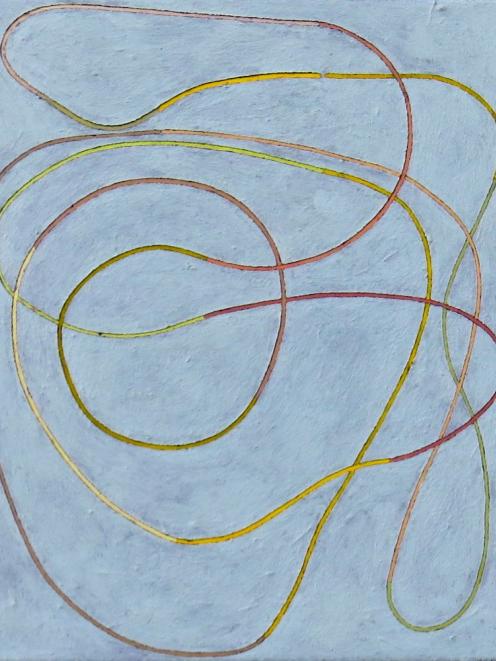 ‘‘Console Whispers’’ is a group exhibition by three local artists.

Campbell Patterson has used two media to comment on the mundane elements of daily life and throwaway society. His multipanelled oil works use a bare minimum of line and heavily muted colour.

The most intriguing is Couple, two panels in which one is simply the inverse of the other. Patterson's other work is an installation consisting of a collection of cleaning products left and recovered from a gym's changing rooms.

The front window of the gallery is adorned by a series of aluminium photographs by Ed Ritchie, showing blurry and ambiguous images taken from films. The reflective surfaces and their mounting high on the window deliberately cause the scenes to blend with reflections of the weather.

The artist's other, more sculptural, works are constructed predominantly of found house fittings. The most memorable of these is the twin-handled Zero (Tonight).

Nick Austin's paintings question reality and illusion. They range in style from the clever use of framing materials in the representational Aquarium (Radio and Martini Glass) to the minimalist concepts of The Past. His Metaphysical Presents consists of three painted panels which appear to have been wrapped, and in What Sort of Music? he brazenly yet poignantly presents a precise image of a piano keyboard in paint.