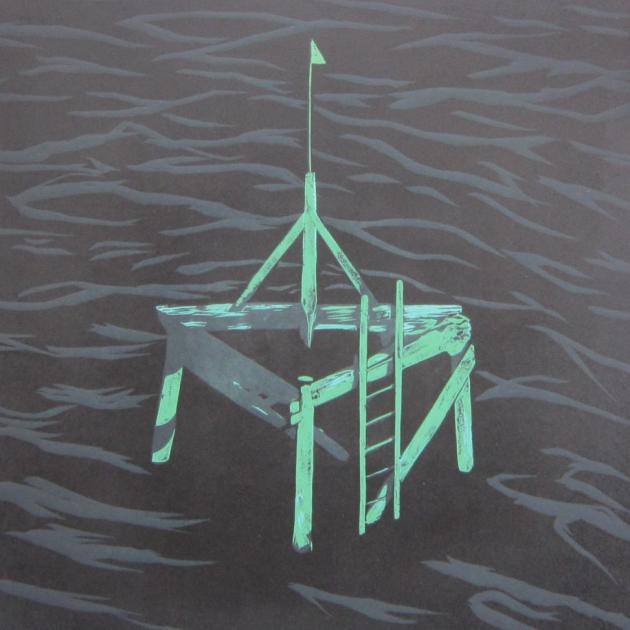 Bellamys Gallery in Macandrew Bay is currently exhibiting a collection of new works by Manu Berry and Emma Chalmers.

The two artists are linked through a holistic look at the environment that surrounds us, as Berry tackles land and water, while Chalmers turns her vision skyward.

The works vary between natural formations and man-made structures, focusing on contrasting shapes and lines through water and land.

The prints are characteristically dynamic with contrasting tones and clever explorations of light.

His technique is smartly simplistic and the results are refreshing portrayals of familiar images.

Chalmers presents an often overlooked aspect of our surrounding, the night sky.

She locates her work in Paint Ends, a found map with gouache adornment that charts the southern night sky.

Four views of the night sky are depicted in Gaze 1-1V. Painted on black velvet, the works are naturalistic representations of the sky on a clear night.

On velvet, the works are notably tactile and remind the viewer of the physical reality of what makes up the night sky.

The two artists present land, water and sky to make a complete representation of our natural surroundings, and all scenes are produced with superb technique in the artists' chosen mediums. 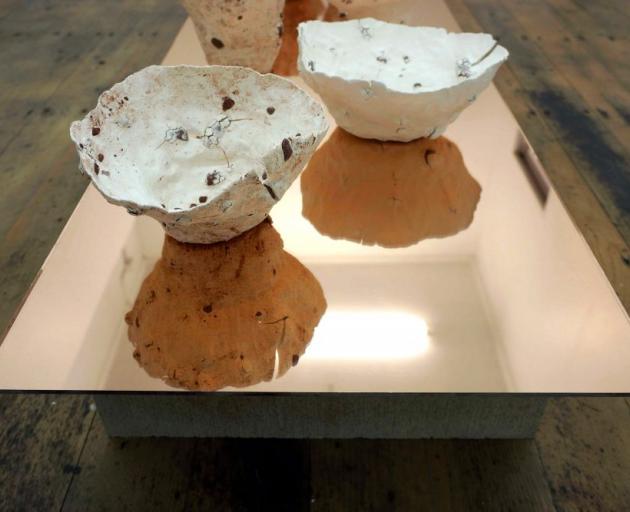 "The Optimists", by Sophie Bannan

While Bannan and Knox present very different works, the artists meet conceptually as they contemplate space and overlooked artefacts.

Bannan exhibits 10 earthenware pots made from the rubble of buildings demolished after the Christchurch earthquakes.

Fragments have been fired in simple pinch pots that are gestural and represent the production process with Bannan's fingerprints visible in the fired clay.

By exhibiting the pots on sepia-toned mirror surfaces on top of cinderblocks the viewer is reminded of the constructive and decorative elements of the original architectural design.

In the gallery space Bannan elevates the now often-overlooked rubble to the status of an art object.

Knox reverses this process and allows his work to potentially remain unseen.

He has placed a single cigarette in the gallery space in an easily overlooked location, allowing it to have a quiet existence.

Knox also promises via a small post-it note in the gallery that one dollar of the artist fee provided by the Blue Oyster will be placed on a nearby street each day until the fee is gone, which would mean the exercise will continue well into next year and long after the end of the exhibition. 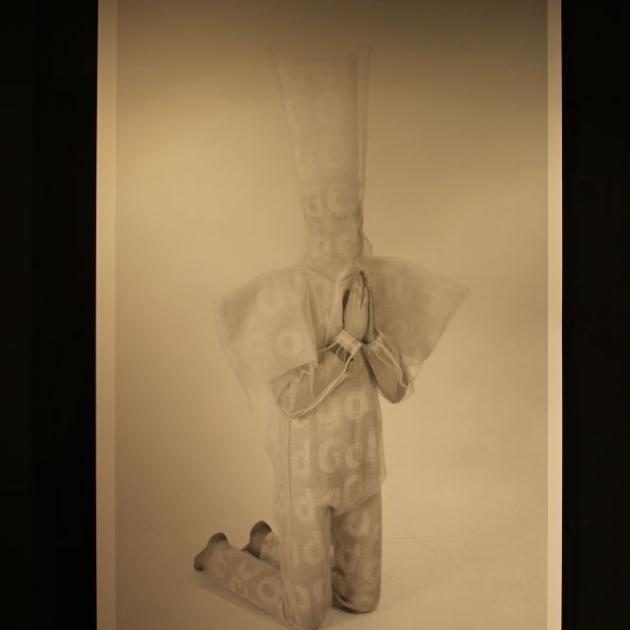 "I must confess", by Neil Emmerson

''Working Men" declares that it does not intend to group the participating artists as a single entity.

While it is an exhibition of six male artists - Flynn Morris-Clarke, Philip James Frost, Greg Lewis, Neil Emmerson, Jeffrey Harris and Ewan McDougall - what is most noticeable about the works across the exhibition is that they are all stylistically different.

The artists selected their own works for the exhibition, with some of the pieces being historical, while others are being exhibited for the first time.

There is a divide in the exhibition between the three younger emerging artists and three well-established artists Harris, Emmerson and McDougall, who are likely to be recognisable to most viewers.

Emmerson's triptych I Must Confess is an especially engrossing work depicting a print of a masked figure in pale grey hues on a white background.

His concerns surrounding identity serve as a reminder of the pursuits of each artist.

Across all works there is certainly a display of the competence and quality of local art.

There is also a sense of masculinity and a male vision, although it is uncertain if this was intended or coincidental.

Brick Brothers does promise that a similar exhibition of female artists will follow in the near future.

This disclaimer brings to light some interesting questions about gender differences in art and reasons for any gender divide, but these are concerns that should be addressed if and when the second show is delivered.