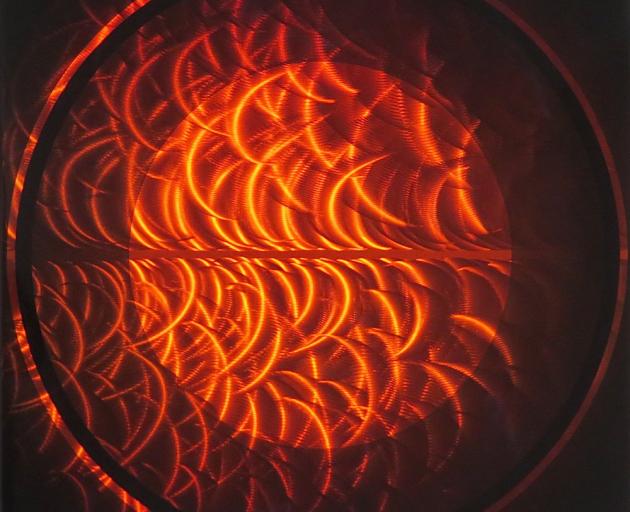 Israel Birch describes his art as carving, and it is easy to understand why. His work follows in the long, noble tradition of Maori carving, even though the tools he uses are far removed from chisel and wood.

Birch’s strong, exquisite abstractions on tribal art are etched and burnished in stainless steel, over which thin veneers of lacquer have been applied. The resulting works shine with power and light, emerging as living copper and gold patterns from their dark surroundings.

The exhibition’s title, ‘‘Mauri Ora’’, is a strong indication of the artist’s intent. It refers to the spiritual essence, which is a strong thread through both time and life, binding living souls together with each other and with their ancestors. The works reference traditional patterns such as tukutuku, while the burnishing creates soft, glowing curves of light, which swirl and shift as the viewer moves round them. The works thus become alive with their own inner essence.

The art is an exquisite interpretation of the life force, couched in a well-balanced combination of both classical and modern style. Birch’s work also contains nods to other abstractionists working within or from the Maori viewpoint, with Ralph Hotere’s minimalist circles and lines being both a clear benchmark and antecedent. 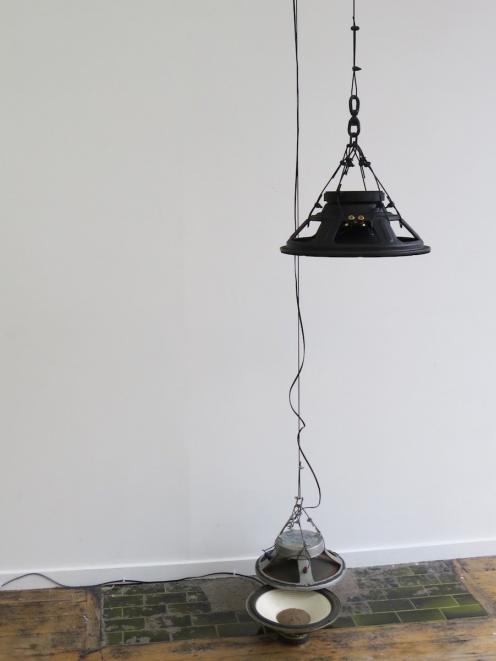 mf/mp, a collective of experimental musicians and artists, provides a series of thought-provoking works, which explore the notion of trace, the psychic/acoustic residue left in a space after an event has occurred.

Sam Longmore and Charlotte Parallel use feedback as a basis. Longmore has taken a timber beam and rigged it with audio contacts to produce soft tones which alter with vibration and changes in the room. Parallel’s Coil to Coil uses suspended speakers, some wired as microphones, positioned such that a low hum alters in pitch as the speakers move.

Karl Leisky uses the aleatory playing of sampled audio snippets recorded at gigs in an exploration of the border between intentionality and randomness. William Henry Meung, inspired by his tinnitus, uses electronic circuitry to mimic the experience of the condition. Leben Young’s installation of detritus from None Gallery, along with sounds made by it, creates an artefact and memory of a gallery space.

The most thought-provoking work is Sally Ann McIntyre’s commentary on extinction and the resulting effect on ecosystems. McIntyre has recorded the silent ‘‘sound’’ of museum exhibits, which she then broadcasts into the habitats where the species once lived. The resulting mix of current bush noises and the implied silent overlay encourages us to ponder what has been lost. 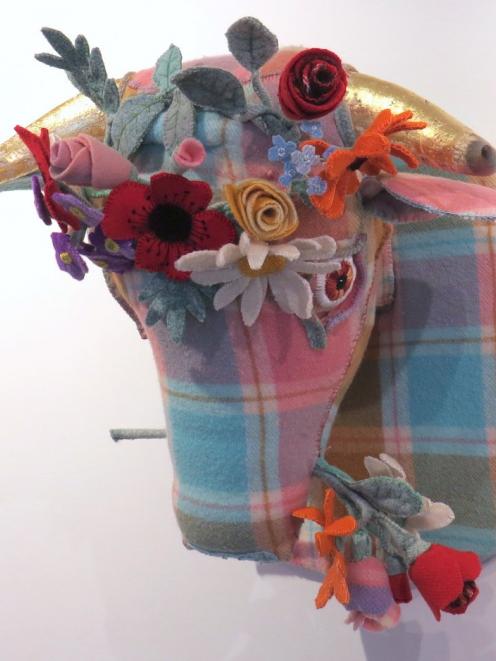 Fabric is the order of the day at Gallery De Novo, both in terms of subject matter and medium. In a joint exhibition, Pamela Brown presents a series of paintings of place, represented by outlines of clothes, and Kerry Mackay provides an offbeat display of trophy animal heads created out of soft fabric.

Brown’s paintings speak of a certain place that is important to the artist. The images are presented as a series of frocks and dresses, though, in reality, these become simply the frame shapes upon which memorial facets of each place are presented. Thus, for example, A Dress for Dunedin shows a view down Otago Harbour with green hills, albatross and penguins, all presented within a dress-shaped space surrounded by a dark patterned background.

Mackay’s trophy heads are unusual, but appealing. Each mimics the idea of a hunting trophy, though many of the animals represented are the likes of sheep and cows. The works use actual animal skulls as their basis, with new skin created as ‘‘inside-out taxidermy’’ by the artist using traditional New Zealand woollen blankets, sometimes augmented with embroidery. The end product, once the viewer gets over the initial strangeness of the concept, is charming, with each of the trophies having a distinct — and usually friendly — personality.