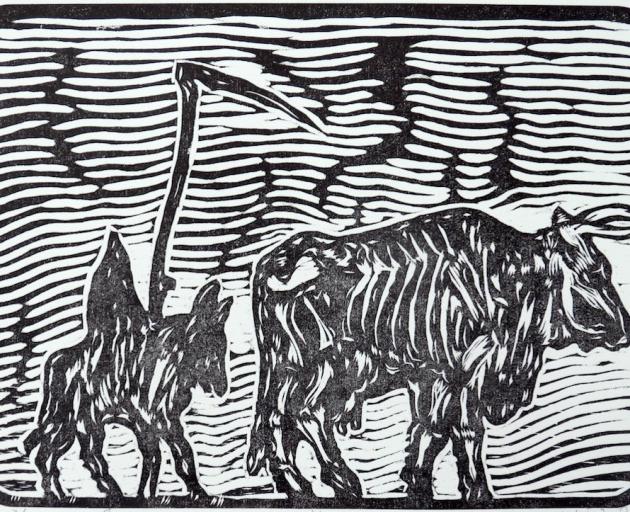 Barry Cleavin's latest exhibition at Brett McDowell Gallery displays a further side to the work of the playful punning print-maker. Alongside the artist's well-known lithographs and a large array of digital prints, Cleavin has presented a display of fine woodcut prints.

The woodcuts, many of which are replicated among the digital pieces, show the stark intensity of Cleavin's designs. This powerful nature can easily be overlooked in the artist's more colourful digital work or detailed lithographs and etchings.

Stripped down to a bare black-and-white, and with the bold heavy strokes which are characteristic of the woodcut, we can focus more on the dynamism and flow of images such as Damnation and Hell Fire and The Last Horseman of the Apocalypse.

While the titles might suggest doom-laden images, the works are glorious in their often tongue-in-cheek maleficence, even as they draw inspiration from the perceived crumbling of our civilisation. Cleavin believes strongly in the art of the print-maker as a sometimes cynical reporter on the world, following in the tradition of artists from Piranesi to Dore, and influenced by his European and Japanese forebears. The works are powerful and very enjoyable, despite their portentousness. 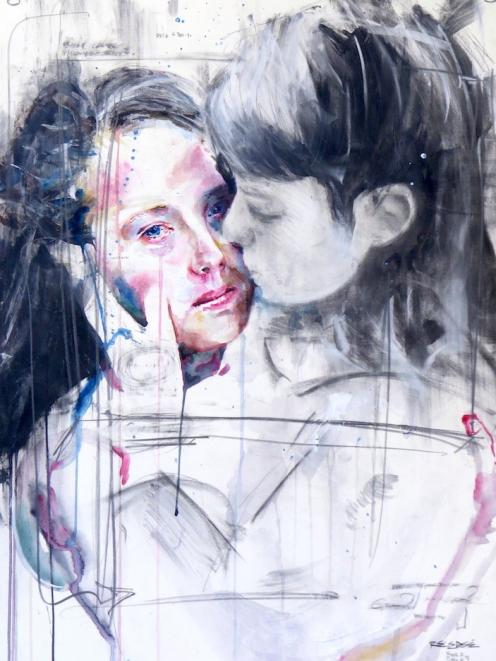 The Artist's Room is hosting ''Sleepless'', an intriguing collaborative exhibition by two Dunedin artists well-known for their street art, Tyler Kennedy Stent and Jon Thom. Each has presented a handful of individual works, but more significantly there are also several pieces in which the two artists have combined their skills.

While Stent and Thom are both primarily realistic portraitists, there are significant differences between their styles. Stent uses an impressionistic approach in which the use of areas of often surprising colour imbues the works with life and a strong three-dimensionality.

In contrast, Thom produces a more studied, realistic effect, in which the essence of individuals and their emotions is strikingly captured in monochrome sweeps of charcoal and graphite. In one work, The Traveller, they are joined by a third artist, Matt Smith, who enhances the art with an intricate kaleidoscopic tracery of buildings.

While Stent's individual works are fine, as are Thom's photographic still-life studies, it is the collaborative pieces which stand out. In images such as Molly and One, and particularly the gorgeous Release, the combined talents reach a fine symbiosis. Somehow, the two opposing styles manage to enhance each other, producing hauntingly effective and memorable pictures.

Blue Oyster is showing an interesting exhibition commemorating the 125th anniversary of women's suffrage. In it, five artists examine the historic roles of women and how those roles have changed. Each artist has chosen a different approach to explore this ''herstory''.

Erin Broughton's text-based Piece of Cake explores women's search for equality and recognition in light of such traditions as ''ladies, a plate'', and the difficulty of seemingly simple situations when faced with a glass ceiling. The latter concept is continued in an attractive traditional taniko hanging by Metiria Turei, which assesses the glacially slow increase in the number of women elected to high office.

The gallery's main room contains a series of photographs by Nadai Wilson. In these, personal memorabilia and heirlooms are presented as intriguing clues to history, concentrating largely on women working in traditionally masculine occupations. These photographs surround two deeply personal works by Caitlin Clarke exploring family history and matrilineal whakapapa.

The exhibition is completed with a video by Nina Oberg Humphries, in which the part-Cook Island artist is shown in the traditionally female role of washing business shirts - a symbol of Western male prestige - in a traditionally male-only kava bowl. The video, while provocative, perfectly hits its target.