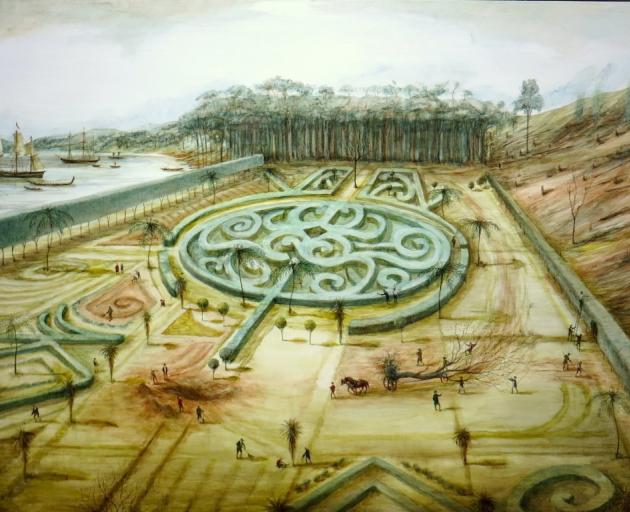 Dunedin's Milford Gallery has started the year with an impressive group show which bends time and space. By astute curation, the work of the six artists readily divides into three complementary pairs.

Chris Heaphy and Leanne Morrison use abstract painted mark making to achieve their effects. The pseudo-typography of Heaphy's works creates a sense of rhythm and flow, implying a sense of determined movement. Morrison's bold suprematism creates an impression of three-dimensionality. Closer inspection of Morrison's work reveals subtle shifts of colour which enhance the pieces and show a strong mastery of the artist's chosen medium.

Peata Larkin's canvases, marked in a tattoo-like style by the injection of paint, sit directly opposite the magic realism of Jenna Packer's neo-Victorian gardens. The works seem to curiously interact, with Larkin's paint moko taking on the forms of formal European gardens just as you notice the koru designs within Packer's hedgerows. Packer's art hints subtly, but pointedly, to ecology, colonialist, and - with a hint of self-irony - cultural appropriation. 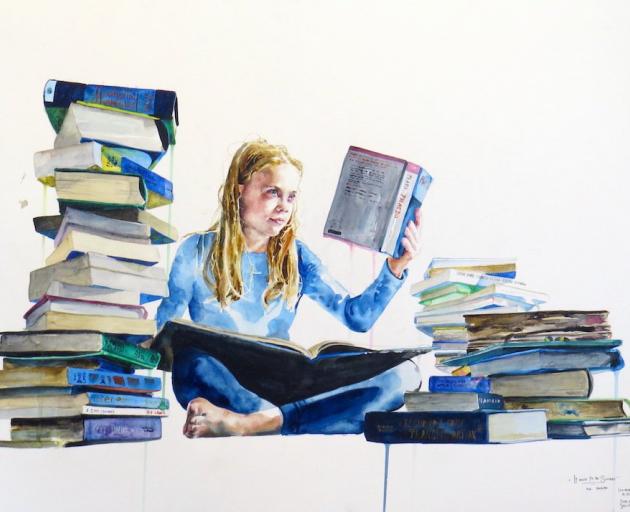 The Artist's Room is showing works by Tyler Kennedy Stent that are the illustrations for a new book by Donna Rutherford.

The book, Moireach, which was launched at the gallery last weekend, is an enchanting, bittersweet tale of a young girl for whom myth, fantasy, and reality are bound together so closely that there is no differentiation between them. Stent's works, with their soft watercolours and strong use of negative space, suit the book perfectly, and stand as fine artworks in their own right.

Figures float on the paper, surrounded by empty white space that reflect's the girl's soaring imagination and lack of grounding in the everyday world. In some pieces, scenes have been impressively described with only a few soft lines of colour, the bare areas of paper being allowed to form the major part of the figures. Where colour has been controlled precisely, it has been used to expertly capture expression and emotion.

In several of the works, a line of figures forms an arc across the paper, deliberately suggesting the girl's imagined (or not?) transformation into a bird, a fox or a seal. In other pieces, thicker white paint - acrylic or gouache - has been laid on, with the coloured watercolour surrounding it or overlaying it to excellent effect. 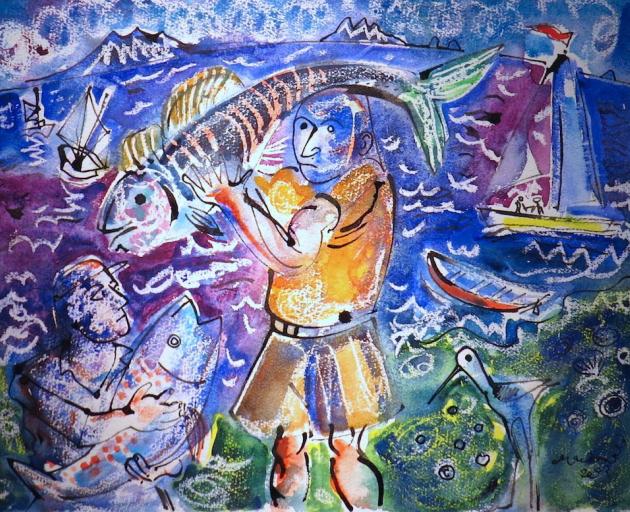 Robert Macdonald's artistic roots are divided between his adolescence and early adulthood in New Zealand and his later life in Britain, most notably in Wales. A skilful printmaker and watercolourist, his exhibition at Fe29 Gallery focuses largely on the second of these two media, with a series of warm, painterly landscape and figure-in-landscape scenes.

In many ways, Macdonald's art forms a fine antithesis to Tyler Kennedy Stent's art. Whereas Stent's main artistic weapon is colour softly impinging on negative space, with Macdonald there is bold linear demarcation between strong ebullient areas of colour.

Both techniques work excellently for the artist's chosen uses. In the case of Macdonald's art, the land is vibrant and full of solidity and action.

We can feel the rivers flow and the clouds move. The works also contain subtle touches of humour, vaguely reminiscent of the work of late Dunedin beach-scene specialist Lindsay Crooks.

The strong gestural lines of images such as Huia and Fisherman - Hauraki Gulf further enhance the dynamism of the work, and simultaneously indicate the well-founded artistic confidence with which Macdonald produces his art.

One stone lithograph, Llyn-y-Fan Fach is also on display in the exhibition, giving strong evidence that the other string to Macdonald's artistic bow is just as keen.