Imogen Taylor and Dusty settle into their new studio provided by the Frances Hodgkins Fellowship. PHOTO: GERARD O’BRIEN
Having left Auckland behind, possibly for good, Imogen Taylor is enjoying settling in to the Dunedin lifestyle. Rebecca Fox talks to the artist about her big move south.

Imogen Taylor grew up reading about New Zealand artists and now cannot quite believe she is working so close to where many of their works hang.

"It's funny how it's come full circle. Those art works I've been looking at since I was a kid are now right across the road,'' Taylor says.

As the 2019 Frances Hodgkins Fellow, Taylor gets a large studio and office for a year - something she is coming to grips with.

"I was so excited that I had the whole year here; I'd get a salary and a big studio to just focus on painting.

"It's the recognition that you have reached the pinnacle of being an emerging artist. It's an acknowledgement that your work is doing really well and people see the work you do is important and of a high calibre. You get a lot of confidence out of it, I think.''

Now she is slowly settling in to her new workspace.

"I literally brought everything for my studio down in two suitcases. I'm usually more messy than this,'' Taylor says.

She dresses for work - oversized blue overalls, complete with paint splatters, and work boots to complete the garb.

Spit Roast, by Imogen Taylor
"I use low-toxicity paints. It gets over the face, in the hair.''

Her dog Dusty is her constant companion while she works.

Taylor is starting work on an exhibition for the Hocken in November, but also has many other projects on the go, including co-publishing Femisphere, a 'zine which looks at other female artists (or those who identify as such), their practices and how they can be more visible and encouraged.

"I also want to do research into Frances Hodgkins, Rita Angus and Doris Lusk - Dunedin painters.''

Taylor, who until now has lived in Auckland (although born in Whangarei), paints on hessian sacks stretched out over frames skewed into parallelograms.

"I like the bumpy skin-like texture of it. There is this play between the defined lines and the surface.''

Taylor describes her work as semi-representational or semi-abstract.

"It's a very playful practice.'' 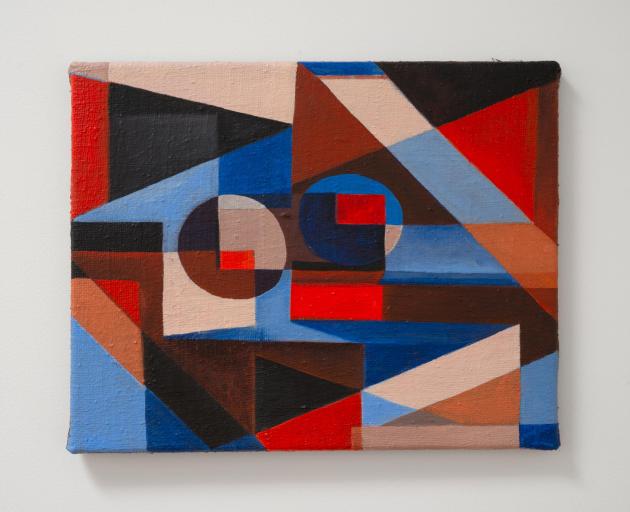 Sapphic Fragments, by Imogen Taylor.
Her interest in New Zealand painters came from having books on them in the house and a father who wrote a book, New Zealand Contemporary Painters, in the 1980s.

"There were a lot of books around. I grew up with the art of Rita Angus, Gretchen Albrecht and Robyn White - that's how I discovered painting.''

When she went to art school, New Zealand painters were not "cool'' but Taylor was attracted to them nonetheless.

"I'm first and foremost a drawer.''

As a result Taylor always knew she was going to be an artist.

"I used to drive by Elam imagining going there. It's been a lifelong thing.''

She made that a reality, graduating in 2007 from University of Auckland's Elam School of Fine Arts with a BFA, and in 2010 gained a post-graduate diploma of fine arts.

Taylor's work has grown a lot in the years since then, mostly due to exhibiting regularly at Michael Lett Gallery in Auckland, she says.

"The level of criticism is quite high. Exhibiting and having an audience encourages how you make and think about the work.'' 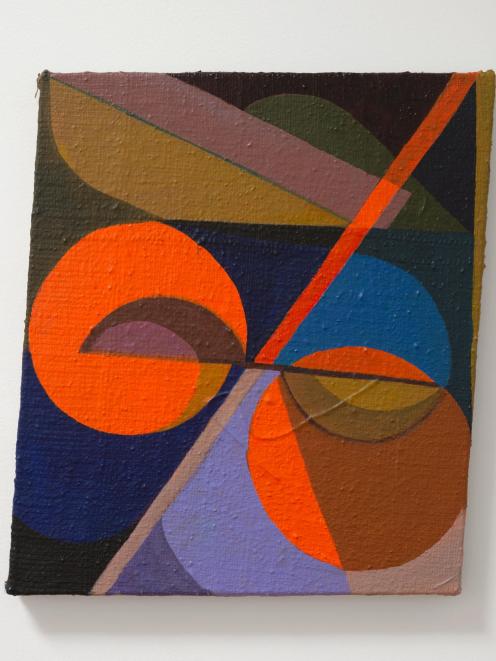 Hooded Violet, by Imogen Taylor. Photos: Supplied
When she starts each work she has no idea where it will end up.

"It's open to failure and humour and intuition. It's really layered, like, literally, quite layered. Conceptually there are all these things threaded together.''

She is particularly interested in the work of other artists, historic and alive.

"I make a conscious decision to only look at practices by women in the past. So the work has this kind of ... feminism or negotiation of gender in it. When you look at it sometimes it has obvious, sometimes subtle references to women's practices.''

Taylor likes that she is not completely in control of her work, as it allows the audience to put their interpretation on it.

"I find it hard to respond to an artist who has to have control. I prefer a generosity so the audience can make the decision and tell me what they think about the work.''

Her use of colours can look nostalgic, and she believes by moving to Dunedin the colours have changed.

"The colours have become more saturated down here than in Auckland.''

She finished works for a recent solo exhibition at Art Basel in Hong Kong when she first arrived in Dunedin, which she found problematic.

"There was this immediate change, but I had to be careful because it was all for one show.''

Hong Kong was an amazing experience for Taylor who was exhibiting for the first time outside of Australia and New Zealand and in one of the biggest art markets in the world.

"I didn't know what to expect, but I got amazing praise.''

The timing of the move to Dunedin has worked perfectly for her and her partner, who found work at Otago Polytechnic.

"Now it's autumn and the colours people tell me are going to be all golden. We've been collecting cockles and blackberries, eating stonefruit, and going to the farmers market. I've never had a summer like that. It's been beautiful.''

They were settling into their rented home which happens to be near the school her grandfather went to.

While she enjoyed the solitude of painting, Dusty provided company and an excuse to venture outdoors.

"It's a great way to discover a new city, going to dog parks and the students love her.''

Time out from painting was an important part of her process.

"The beauty of being self-employed is being able to set your own hours. Looking is really important if you are going to be making. There needs to be balance. You need to absorb just as much. You are dealing with visual languages.''

The couple have left Auckland behind - citing sitting in traffic and house prices as reasons to leave - and may stay in Dunedin after the residency. 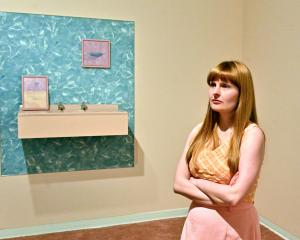 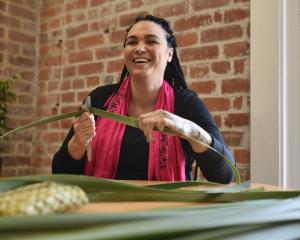 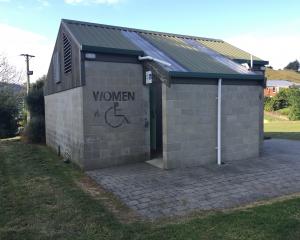 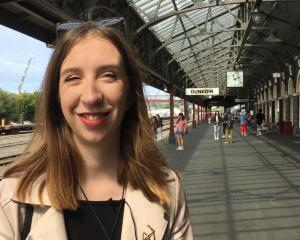