Finding her own voice 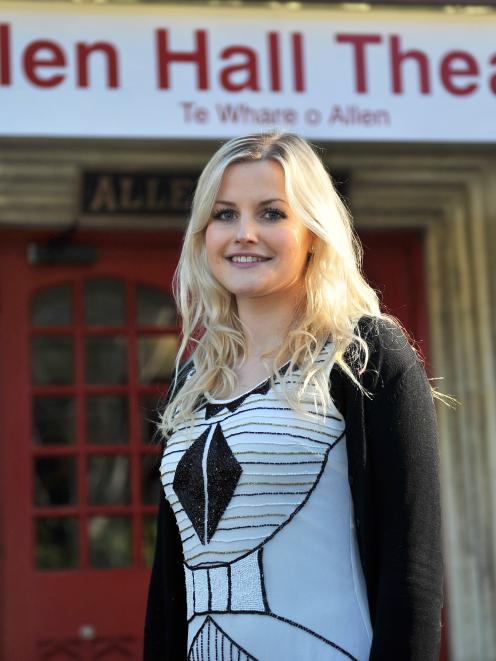 Sophie Morris is looking forward to her performance in musical theatre at Allen Hall. PHOTO: CHRISTINE O`CONNOR
Performing Gretl in The Sound of Music ignited Sophie Morris' love of singing. She tells Rebecca Fox about juggling her love of show tunes with opera.

Classically trained Sophie Morris has decided to take a step out of her comfort zone and back to her first love, show tunes.

The young Dunedin singer has decided to ''go Broadway'' with an eye on a future as both an opera and musical theatre singer.

She is putting it all on the line with her own concert Sophie Morris - Goes to Broadway featuring her favourite show tunes.

Ms Morris' love of musical theatre ignited her interest in singing to begin with.

She was a late bloomer in the art, only discovering her interest when appearing in her school, St Hilda Collegiate's, production of The Sound of Music as Gretl.

Along the way she performed in many local musical theatre productions, including playing Sandy in Grease.

That led to studying classical voice at the University of Otago under Isabel Cunningham and Francis Wilson.

During those years she sang solos with the City Dunedin Choir Messiah at Knox Church, performed in Opera Otago's A Night at the Opera and was a finalist in the Dame Malvina Major Foundation Aria Competition for two years.

Four years later, she had completed a bachelor of arts degree in performance voice with honours.

The university approached her to see if she would be interested in doing a master's of music degree in crossover, classical and musical theatre.

She took up the offer, becoming the first person to do the master's in voice.

Her focus for the degree was on musical theatre and required her to perform public concerts and record and produce an album.

''It's spreading my wings. A bit of a gamble but exciting.''

She is now studying under established vocalist, music director and contemporary voice specialist Nick Hollamby, and senior lecturer in contemporary music Dr Ian Chapman (also known for his performances as Dr Glam), who were not only helping with her singing but also industry coaching and show planning.

Her classical training was helping with her new direction, as it had given her the fundamentals of singing and performing, she said.

Ms Morris was also completing a bachelor of commerce degree in marketing, so she was able to use skills learnt during that in putting together her show.

For the concert she had organised other musicians and singers to take part, including some music department students to be in the chorus and sing duets.

A string quartet from the university would also perform, and a couple of dancers.

Conductor, singer and musician Alex Wiltshire, who had many years of experience in musical theatre, would accompany her on piano and help out with the concert.

Ms Morris met her at a singing school in Napier and was looking forward to absorbing some of her wisdom, she said.

Once the concerts were over, her next project was to record an album, which she would do at the university's recording studios in Albany St.

She had not abandoned classical singing and was continuing her training.

''Then at the same time I am working with Isabel Cunningham, outside of the university, to continue my classical/operatic training.''

Her dream was to make a career out of singing, whether on the opera stage or the Broadway stage or both.

So once her studies were finished, she planned to travel and hit the audition circuit, ultimately in Europe or New York.