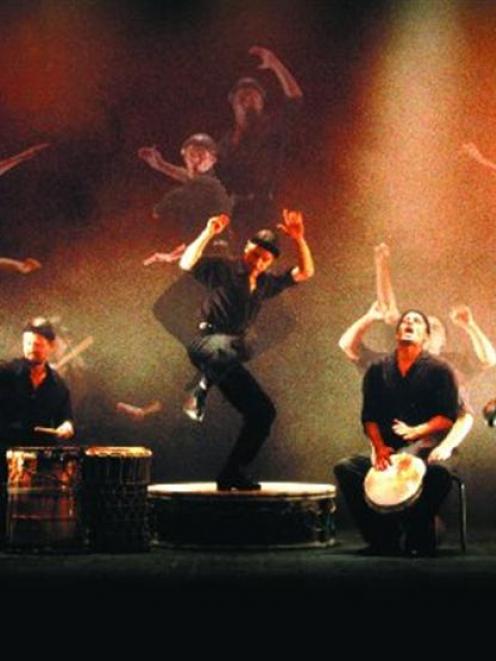 Drums speak in Spanish tongues in Dunedin this weekend. Nigel Benson meets the founder of the Camut band, Toni Espanol.

One of the headline acts of the 2008 Otago Festival of the Arts, the Camut Band, makes its New Zealand debut at the Regent Theatre tomorrow night.

The Barcelona troupe of dancers and musicians meld Spanish dance and African percussion, in a multi-cultural storm of drums, voice, tap and sand dance.

"I want to say something with the drums. I don't want to just show good technique.

"Rhythm is the heritage of all mankind. It does not belong to a single race or country.

"Rhythm has existed since the beginning of man on Earth."

The show ranges from traditional African instruments, such as the Senegalese djembe and thioung, to a solo piece delivered on an earthenware pot wired with feedback, producing an effect that has been described as "Hendrix plays pottery".

The band's only New Zealand performances will be in Dunedin tomorrow and Saturday, before it travels to Adelaide, Australia.

"We are very excited. We have been to four continents, but we have never been to Oceania.

"New Zealand is our first time in Oceania," Espanol (51) says.

"We dance with African drums. We are Spanish, so people will notice we have Spanish feeling.

"But, we don't dance flamenco. Although, the character of Spanish people always has something like flamenco," he says.

"We dance with huge drums.

"There is lots of energy and lights in our show."

Espanol says he has been captivated by African culture since his youth.

"Since I was a small child I was fascinated with rhythm of black sportsmen like Cassius Clay and Pele.

"In 1986, when I was 29, I decided to go to west Africa for three years to learn African percussion. It was very hard, because all the things in Spain you think will work in your mind.

"But you get there, and your mind changes completely," he says.

"I learned their language and culture and it was wonderful. You see the energy they employ to play the drums.

"It comes little by little. But what you learn you don't forget, ever."

Espanol returned to Spain to form the Camut Band in 1995, with choreographers and brothers Rafael and Luís Méndez.

"I really want to see some Maori culture while we're here in New Zealand.

"We saw a Maori group doing a haka at Valencia during the America's Cup and it was really good.