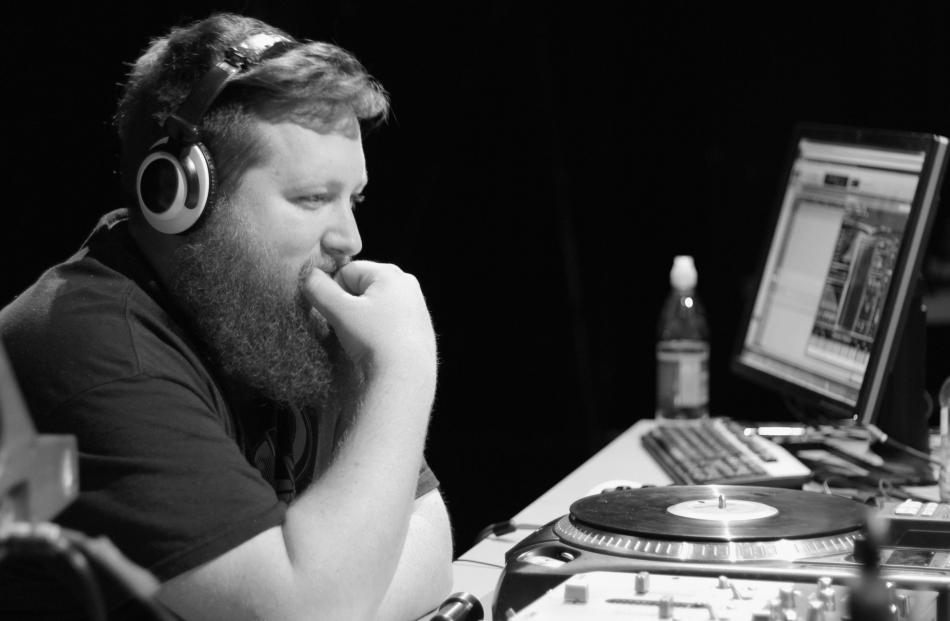 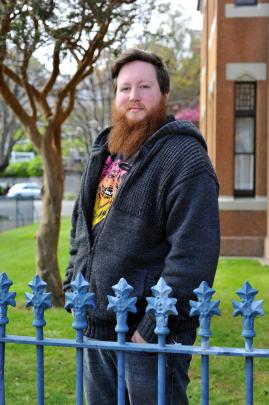 Mozart fellow Jeremy Mayall at the University of Otago. Photo by Gregor Richardson.

A man who fills his time with many things, from composing, recording and playing music and collaborating with other artists to completing a PhD, raising money for the Himalayan Trust and growing beards - the 2014-15 Mozart Fellow keeps himself busy. Charmian Smith reports.

This year's Mozart Fellow, Jeremy Mayall, loves working with other artists and collaborations of one sort or another are a big part of his work.

''It's a great opportunity to see things from a new angle and do things you may not have done otherwise. It's just so much fun,'' he said.

Composing music can be a solitary activity, sitting in a room and scribbling on bits of paper or a tapping away on a computer, and a lot of composers do not get to collaborate until it comes to working with musicians, he says.

''I love doing collaborative work with visual artists, with dancers, with theatre practitioners, with film-makers, because you get involved in a creative way with people. You can work with musicians as well, sending out drafts and asking how does that feel under the fingers?''

He has a couple of performances coming up: a collaboration with Burns Fellow Majella Cullinane, whom he asked to write poems he could set to music.

The song cycle, Cut Away The Masts, about early immigrants coming to Otago, will be performed by soprano Julia Booth at the end of November at Otago Museum, along with Flutter, a multimedia, multisensory work.

Before that, on Saturday at the Dunedin Public Art Gallery, he will be performing Imaginary Communication for piano and manipulated piano sounds: microphones in the piano run through some special-effects pedals.

It is a quiet, ambient contemplative piece making the most of the cavernous reverb in the gallery, he says.

Mayall (30) says he gets bored easily so he fills his time doing many things.

Even as a child in Hamilton he was acting and playing music, learning piano, drums, later being a DJ and playing in a jazz band.

He applied for a scholarship to study law but found it impossible to write a supporting page on why he wanted to be a lawyer.

He decided he was meant to do something else and enrolled in music instead.

While a student studying classical composition, he taught himself digital recording, producing music for bands and recording pop songs, he said.

''The term 'producer' in terms of recording can mean a great deal of things, from just recording a band as they play and tweaking the sound, to actually helping co-write and orchestrate and arrange and even play a lot of the sounds, depending on the style of music. I did a bit of all of that. I got into writing pop songs and working with different singers, as well as doing orchestral stuff.''

As part of his film studies he became involved in film music and has written scores for around 50 short films and four feature films, as well as theatre productions and musicals that were staged at the Hamilton Fringe Festival.

He has also been musical director for music theatre groups, in one of which he met his wife Courteney. When he started his PhD he decided to grow his beard long - when he graduated in a flowing robe and long beard he would look like a wizard, he said with a chuckle.

He now describes himself as a beardsmith, founder of The New Zealand Beard and Moustache Appreciation Association.

However, on a student budget he has not yet managed to make it to the world beard and moustache championships, he said with a laugh.

Also, to help fill the time, he set 15 world records for competitive eating and became a registered marriage celebrant.

''It seemed kind of fun at the time. I needed those things while doing the PhD, which was so demanding mentally and emotionally. It was nice to have these releases that were completely removed from it, really ridiculous hobbies.''

He recently submitted his thesis, which he had hoped to complete before coming to Dunedin. However,

with other commissions and film scores - and his 2-year-old son Wolfgang - schedules got pushed back a bit, although he has managed to be productive this year, he says.

''They all went parallel but never intertwined, so I wanted a way of bringing all that together so I could have a single compositional voice. At the start of my PhD that's where my research headed and from there a lot of my music is informed by that, unless I'm writing for a specific purpose that needs only a singular style.''

His first symphony, for orchestra and turntables, written in 2005 when he was 20, was workshopped by the NZSO and the Auckland Philharmonia and premiered by the Wellington Youth Orchestra.

Turntablism is using the turntable as a musical instrument that can control any recorded sound, he says.

''Manipulating a record is very tactile, the way you position your hand, the speed and the way you manipulate the disc completely alters the way the sound is.''

You can press the record that is playing at the pitch it was recorded, you can play it backwards or faster or slower to raise or lower the pitch, and use a crossfader to control the rhythm, he said.

''You are essentially controlling all the elements of music as you would with a violin or a guitar, but the timbre you are controlling is different and infinite because it could be any sound you could record. With a lot of the things I've been doing recently, I record the stuff myself, then manipulate that. It's just a way of controlling sound. I guess it's an unnatural way but it's an interesting way.''

This year, among other things, he has created a video dance piece with Louise Potiki Bryant, the Caroline Plummer Fellow, and did a musical adaptation of Song of Kauri, a book by Melinda Szymanik, this year's University of Otago College of Education/Creative New Zealand Children's Writer in Residence, with her narrating the story.

He also worked on a sound and lighting show with lighting designer Martin Roberts, professional practice fellow and designer from theatre studies, and released an album of piano music, Imaginary Communication, to raise funds for the Himalayan Trust founded by Sir Edmund Hillary.

Earlier this year, Mayall won a Step Higher Award for excellence in academic work, leadership and his specialist field and desire to share his skills and experiences with his community.

He and the other three recipients will be going to Khumbu Valley in Nepal where they get to see the work started by Sir Edmund Hillary and work on projects run by the Himalayan Trust.

He says he will come back in February refreshed with a lot of new ideas.

Mayall has been awarded the Mozart Fellowship for a second year, 2015.

He says ideally he would eventually like to find an academic job because he loves teaching and it would allow him to follow his passion for composing.