A kind of transcendence 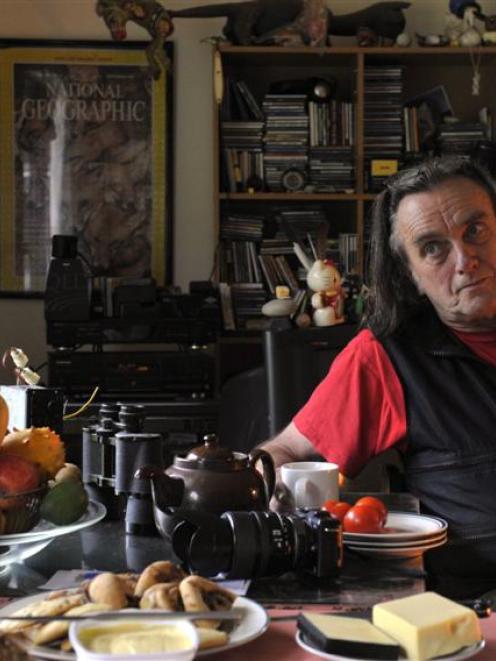 Art school artist adjunct Adrian Hall. Photo by Gerard O'Brien.
Art is like a splinter that gets under the skin, then pops up again much later, according to Adrian Hall.

"I think art is of life and art enriches life itself and it's reciprocal," the Aramoana-based artist says.

He is organising "Actuations, Akshuns and Live-Works", a happening at the Dunedin School of Art Gallery this week and next, as part of "Triple AAA" with two former colleagues: Andre Stitt, professor of performance and interdisciplinary art at the University of Wales Institute, Cardiff ; and Alastair MacLennan, emeritus professor in fine art, University of Ulster, Belfast, Northern Ireland.

They have not met since they were together at art school in Belfast in the 1970s when Stitt was a student and MacLennan and Hall lecturers.

"Alastair did live works on the streets of Belfast. It was a war zone at the time with lots of bombs. Occasionally I'd go to the pub at lunchtime and find Alastair attached to a tree with Sellotape and a ridiculous costume surrounded by the army, who were prodding him.

He had enormous stamina and would do these extraordinary pieces or hold a pose for six or eight hours at a time," Hall says.

The three performance and installation artists will create their time-based work in the art school gallery and also at None Artists' Space in Stafford St and Chick's Hotel in Port Chalmers.

The physical creations will remain at the art school gallery until June 3.

"Andre and Alastair have very different modi operandi, and they will be making and doing and making a mess as they are doing. I have no particular modus operandi but I'll deal with what's going on and try to come up with a response," Hall says.

He hopes to have webcams and projections in each space.

"The notion of drawing those places, which are far apart, together in some way is another sculptural idea really; the notion you can link these spaces by playing around with broadband."

Hall, born in Cornwall in 1943, came to the Dunedin art school in 2000 as artist-in-residence, and returned about five years later to join his partner, Michelle Beevors, head of the school's sculpture department.

He enjoys the community of people here who are creative, inventive and humane, and help each other without regard for careerism, he says. He is now an artist adjunct at the school.

Despite working in and heading various art schools in the UK and Australia, Hall continued his art practice throughout.

"I thought nobody really has a place teaching in an art school unless they are a practising artist," he says.

"I've always done very large installation works in various countries, and when I came here I found myself happily without a job to support me, and I was thinking, do I really need to be paying the price of storage, so I narrowed down and learned to live on a budget rather than extended credit."

Instead of making physical sculptures, he now works digitally.

"In my art I'm actually discovering new things about myself and the world and I get a chance to test them out.

In the mid-1980s he was teaching at the Hornsey College of Art, London, which was then the European centre for excellence in computing, he says.

"That's where I really got saturated with notions of the possibility of using those new technologies to create new thoughts and new meanings and new ways of thinking about the old art issues."

Working digitally also means he no longer relies on curators or galleries which want him to make more of what sells.

"The net is full of conversations about art theory currently whereby curators are recognised as being the creative energies and manipulators, and, personally, I resent this. I am striving to maintain an independence of thinking and independence of doing which is uncompromised in any way and not to do with promoting anybody else's career.

"This is why I find it more interesting to do things at None with young impoverished people who have nothing to lose and want to go full bore, but if I can strike an arc with them in those spaces, then I feel I'm earning the oxygen I breathe.

"I have a very jaundiced view of things like the Venice Biennale, and there's a Beijing biennale this year which a number of people are asking collectors and galleries to boycott.

"It's the largest art market for a certain kind of art and growing exponentially because the Chinese, to take their place in the world today, need to demonstrate culture as it is known by the rest of the world and are able to buy it. New Zealand, for instance, wishes to display ingenuity and careful creativeness in order to take its place alongside the world and borrow more money off China, and so on."

He adds: "I'm really not of this time any more". However provocative art appears to be in its time, it will eventually settle down and be recognised, he says.

He points to the example of French Impressionist Claude Monet, who, he says, was virtually kicked out of Paris at the time. Now the most popular piece in the DPAG is La Debacle, he says.

"There it is, floodlit, cleaned to blazes and looking like something that came out of somebody's bathroom really, with a queue of people lining up to read the label on it and not even bloody well look!"

He mentions an exhibition a few years ago in Sydney where German curator René Block showed his collection of work by artists in the Fluxus movement of the 1960s and early 1970s who opposed artistic tradition.

"All of these terribly aggressive and urgent works made of cardboard and cheap materials that were banged and spat together, which in themselves are incredibly evocative, they all appeared in perspex boxes, polished and looking immaculate.

"When I went into the gallery I thought, `God, most of the people that I knew that were in Fluxus wouldn't have been allowed in this gallery!'."

Hall attended the Royal College of Art in London in the 1960s, where he worked with Yoko Ono and studied philosophy with Iris Murdoch.

When he was racing round London with Yoko Ono on the back of his Triumph motorcycle, she was "unheard-of, poverty-stricken and working like crazy on absolutely insane-sounding ideas".

"Last year it made me smile to see she'd been awarded the Hiroshima peace prize.

"The combination of Yoko and really being out of my depth studying philosophy and talking with Iris a lot about being, experiencing and all those existential things you do when you are very young and return to when you are much older, all those things started to make me question this business that I seemed to be on, which was making work which was getting better and better but doing less and less," he says.

However, his work at the time got him into Yale University in the US, and, on Ono's advice, he met and worked with Donald Judd and Robert Morris, two noted minimalist artists, and was exposed to radical movements such as the Black Panther Party, an African-American revolutionary leftist organisation.

It was the mid-1960s, a time of campus riots in the US, Paris, and elsewhere.

"It resurrected and hardened my working-class socialist background, and ever since then, I've been trying to bridge the gap between my compulsion to try and make art because I think it's the only activity in human existence over which any person has complete freedom and must take complete responsibility.

"There's no need for it - God knows there are enough rotten artists in the world and we don't need another one, but if it's done right, it can be a transcendent activity and can change things, and even slightly, that's a good thing."

His art, he says, is not about his vision of the world, but about the problems he has with the world that might be able to be communicated and illuminated by the things he produces.

He hopes that if people make the effort to look at his art, something in it will stir them, perhaps through a sense of unease that provokes a sense of personal recognition and the anxiety we all experience.

"I believe my practice is about some kind of transcendence, and it's about questioning and exposing us - and the artist as much as anybody - to questions of being."

See them, hear them

• "Actuations, Akshuns and Live-Works" by Triple AAA (Andre Stitt, Alastair MacLennan and Adrian Hall) is on from May 7-20 at Dunedin Art School Gallery, Dunedin, Chick's Hotel, Port Chalmers and None, Stafford St, Dunedin.

• "Triple AAA - Detritus" will be on show in the Art School Gallery from May 23 to June 3.
Daily programmes will be available on Facebook and from Julie Goldsack, Julie.Goldsack@op.ac.nz or telephone 0800 762-786.