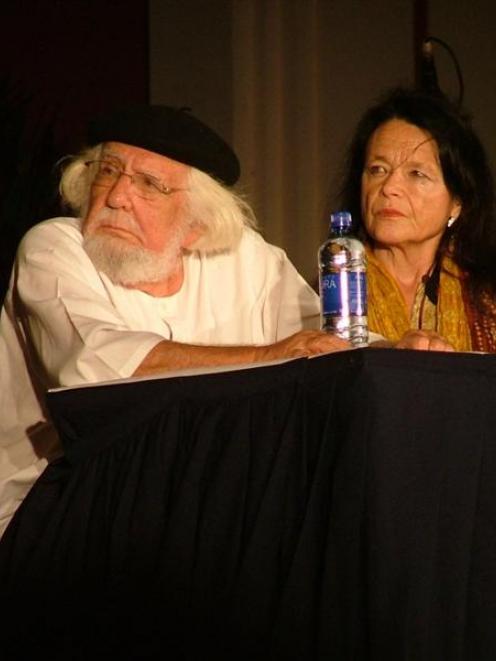 Nominee for the 2005 Nobel Prize for literature Ernesto Cardenal (left) and US beat poet Gioconda Belli. Photo supplied.
The pen is mightier than the sword. It's even been known to take on the machine gun. Nigel Benson talks to David Howard about the power of poetry.

If you were playing a word-association game, you probably wouldn't link Nicaragua with poetry.

Howard was the only New Zealander of 130 poets from 54 countries invited to V Festival Internacional de Poesia de Granada 2009.

The five-year-old festival is billed as one of Latin America's largest cultural events.

Nicaragua has a proud history in poetry and has been a poet's haven since Rubén Dario (1867-1916), considered the father of modern Spanish poetry, started jotting down his existential angst in the late 1800s.

"There's no pain greater than the pain of being alive/nor a more terrible nightmare than that of conscious life," Dario wrote.

It could have been a rallying cry for Nicaraguans.

"After Dario, being a poet turned into something honourable," award-winning Nicaraguan poet Gioconda Belli says.

Poetry came to symbolise free expression in the oppressed country.

"We tend to view language largely as an information carrier. But language does many other things," Howard says.

"Poetry is right there at the beginning of every culture. It pre-dates agriculture, let alone urbanism, capitalism and Marxism. The Sandinista government promoted poetry because it wanted to make Nicaraguan people aware of their heritage and of their own possibilities.

"In Nicaragua, poetry is a utopian residence that every man, woman and child appears to visit regularly; some even try to live there.

"The doormen, taxi drivers, teachers . . . they can all quote bloody poetry. You just don't hear that here.

"The song that moves a New Zealand preschooler continues to move a Nicaraguan labourer, teacher or businessman. As a minor poet from the bottom of the world I felt humbled and inspired."

A little under six million people live in Nicaragua.

"Economically, they're right down. The Government is compromised and the country is desperate for foreign currency. American dollars are preferred by everyone from waiters to street vendors," Howard says.

"In New Zealand, we're very privileged, and yet we find ways to make ourselves miserable. That's not just a criticism of New Zealand, it's a criticism of the Western world. The more privileged a culture is, the more remote it grows from the essentials, so it tries to find happiness in trinkets.

"Whereas, the more impoverished societies try to make themselves happy in order to survive. Poetry has always been an important way to access, name and celebrate what it is to be human. Poetry makes the soul sing."

Howard performed several readings before a pantheon of poets at the festival, including these lines:Rusted barbs are more dangerous than bright ones.

The wire fencing the wellwants the signature of a child's thigh,the blood of one more explorer.

"By the time my Spanish translator had delivered her version, I knew this festival was, in part, mine. [German poet] Esther Dischereit gave me an un-Germanic hug, [Italian poet] Isabella Panfido kissed me and asked for a copy of the poem, [Cuban poet] Victor Rodriguez Nunez offered to publish my poetry, [Dutch poet] Arjen Duinker nodded emphatically and Gioconda Belli smiled."

"I was trying to choose from my work little talismans that took this country out there, because that's where the point of difference is," Howard says.

"Much contemporary New Zealand poetry has little to distinguish it from that of other English-speaking attendees, due to its reliance on American models.

"There are any number of New Zealand poets who can do what American poets do. But that just sounds tired to an international audience. An international mimicry occurs. It all just comes down to who's the best mimic.

"But, people want to hear something that presents a different perspective, even a new world. What we have to offer the world is New Zealand. It's that simple."

With that in mind, Howard says arts funder Creative New Zealand needs to rethink its strategy when it comes to such events.

"Despite extensive attendance at English-language festivals, our contemporary poets had no profile among the 130 attendees I talked with, and the only local writers known to most were Katherine Mansfield and Janet Frame.

C. K. Stead was identified by one Arab writer.

"In my view, the current philosophy of going to English-speaking countries is misguided. There's not the curiosity of the exotic. But, there are 400 million Spanish-speaking people - it's one of the three most widespread languages in the world.

"New Zealand reaches an enormous audience through those people. It's not only a case of looking at the country where the festival is held, but looking at who is going to the festival."

Howard was invited to the festival last year, but his application for funding was turned down by Creative New Zealand.

He was only able to attend this year courtesy of a $3000 New Zealand Book Council grant.

"When I approached CNZ for support in 2007, I was told that this was not a target market and discouraged from making a formal application.

"CNZ's perception seems to be that, because the host country is economically poor, the flow-on benefits will be negligible. But, this is to ignore that 54 countries had 130 representatives at Granada 2009," Howard says.

The only other New Zealand poet to have attended the festival is University of Otago Robert Burns Fellow, Michael Harlow, in 2007.