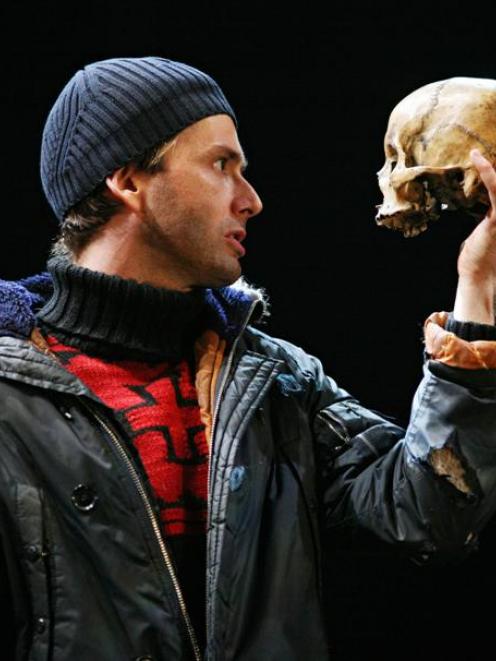 The high-profile casting has generated a huge buzz in the Bard's birthplace of Stratford-upon-Avon, 160 kilometres northwest of London.

Tickets for the sold-out run are trading on the Internet for hundreds of dollars, and so many screaming fans have thronged the stage door after performances that the theatre was forced to ban the signing of sci-fi memorabilia.

Guardian newspaper critic Michael Billington said the hype was a sign of "our star-crazy culture," but praised "one of the most richly textured, best-acted versions of the play we have seen in years." The Times' Benedict Nightingale called it "a revival to relish."

The decision to cast 37-year-old Tennant, one of Britain's biggest TV stars, as Shakespeare's melancholy Dane drew some criticism from theatre purists.

To be fair, Tennant has an extensive theatre background and has appeared with the RSC before.

Co-star Stewart - Capt. Jean-Luc Picard of the Starship Enterprise and Charles Xavier in the X-Men movies - was nominated for a Tony Award this year for his Broadway Macbeth.

In The Daily Telegraph, critic Charles Spencer said "this production has become universally known as the 'Doctor Who Hamlet.'" But he argued that "casting Tennant was a far from cynical ploy."

Critics were impressed with Tennant's ability to wring pathos from soliloquies that can feel numbingly familiar, as in his soft, subtle "To be or not to be" speech.

The Guardian's Billington said the actor made an "active, athletic, immensely engaging Hamlet" and praised his "quicksilver intelligence, mimetic vigour and wild humour; one of the funniest I've ever seen."

A few reviewers had reservations about the amount of humor Gregory Doran's production found in Shakespeare's tragedy of a young prince haunted by the need to avenge his father's death, although all praised Oliver Ford Davies' delicious performance as the play's main comic character, the pedantic courtier Polonius.

In the Independent, Paul Taylor said Tennant "excels when the prince becomes a prankish provocateur." But Daily Express critic Paul Callan felt Tennant relied too much on "quirkiness, pulling faces and various funny voices" to convey Hamlet's descent into madness.

The Telegraph's Spencer said he presented a "facade of smiling, bespectacled geniality" so engaging that "it's easy to forget that he has murdered his brother to assume power."

Reviewers were divided on whether Tennant will be regarded as one of the great Hamlets, up there with Laurence Olivier and Michael Redgrave.

The Guardian proclaimed Tennant "the best Hamlet in years." The Daily Mail's Letts was less impressed: "For all the stage-door excitement and box-office success, this is not the greatest Dane."

Hamlet runs at the Courtyard Theatre, Stratford until November 15 and at the Novello Theatre in London December 3-January 10, 2009.