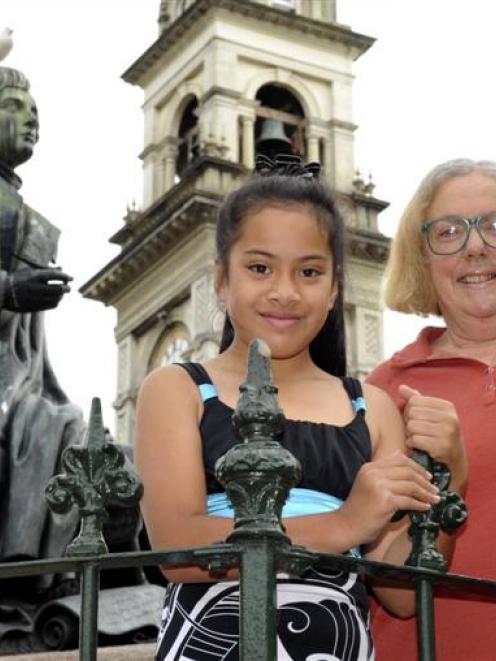 Burns poetry competition winners Molly Saula Ahokovi (9) and Lynne Hill, both of Dunedin, in the Octagon. Photo by Gerard O'Brien.
The 2011 Robert Burns Poetry Competition drew entries from around New Zealand. Now the winners have been found.

Poets around the country have been turning their thoughts to Robert Burns and writing poems in the style of the Scottish bard for the 2011 Robert Burns Poetry Competition.

Judges Prof Liam McIlvanney, of the Centre for Irish and Scottish Studies at the University of Otago, and 2009 Burns Fellow, poet Michael Harlow have selected the winning entries.

They judged the entries blind, not knowing who wrote them.

Michael Harlow said they were impressed by the way the most successful poems captured something of the spirit of Burns, both as a writer and as a man.

They often included a celebration of life and a political awareness, which was typical of Burns.

"Burns had a very political eye, and some of the poems we chose also were responses to real social, political and cultural issues - those two things emerged for me as a judge.

"They were the qualities that stood out," he said.

In introducing the competition last year, Prof McIlvanney said there was no hard and fast standard variety of Scots, so entrants need not fear being inauthentic or using it improperly, and could use as little or as much Scots as they were comfortable with.

Many of Burns' familiar poems were written in a classic six-line stanza rhyming a-a-a-b-a-b, with a short fourth line that often sets up a punchy final couplet, as does this first stanza of "To a Mouse":

Prof McIlvanney said it was a difficult stanza to master because it required four "a" rhymes per stanza so it certainly tested the ingenuity of the poet.

The competition was run by the Dunedin Public Libraries, with support from Dunedin Burns Club, the University of Otago, the DCC, and the Otago Daily Times.

Beneath mighty waves roar
Above white royals soar
Strong winds beating more
As their exile starts.
Deep within their core
They keep Taiaroa in their hearts.
Do they like Scots look back
To a land where only the lack
Of place forced another tack.
Sounds of pipes or waves
Feeling like a torture rack
Resonating to distant graves.
Over lonely seas albatrosses fly
Reminding us just why
Our ancestors chose to buy
Their passage to a new land.
However much lonely wives might cry
Here they'll weave a Scottish strand.
Albatrosses return in later years
Not a hope an early settler bears
For all the hopes and fears
He knows he'll never go hame
In those hidden bitter tears
So seeks to make Dunedin the same.
Music of drum and pipe
Tartans of every type
Haggis with whisky, not tripe
Burns with his back to the kirk
A little Scotland comes ripe
Still a continuing work.

The poem is about Mr Johnston's mother, a descendant of the 1848 immigrants.

The day of sunset

With a trembling hand he
picked up the rustling piece
of papers from the wet,
slushy grass. Thoughts rushed
through his mind. His
blue eyes was like looking
at your own reflection in
the silent rippling water.
The furious wind brushed
his hair like streaks
of colourful ribbons dancing
and twirling in the
moonlight. I'll never forget
this day! he exclaimed.

The poem is about Robert Burns sitting on the grass and writing a song while watching the sun set.

The winning published poet receives the Allan Millar medal and trophy and an invitation to the Burns Supper in Dunedin on January 29. The unpublished poet receives the Stan Kirkpatrick medal and an invitation to the Burns Supper, and the young poet will receive the Stan Forbes medal. Winners also receive book prizes. Prizes presented by 2010 Burns Fellow Michele Powles at a ceremony at 12.30pm on Burns' birthday, January 25. Winners will read their poem or have it read on their behalf. Second- and third-place winners for each category will be presented with certificates.