Much to think about in volume on Mansfield 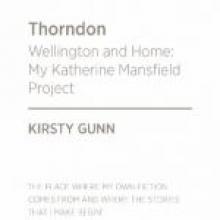 THORNDON - Wellington and Home: My Katherine Mansfield Project <br><b>Kirsty Gunn<br</b><i> Bridget Williams Books </i>
Small and compact physically, short and intense in delivery, Bridget Williams Books supply, to quote Fiona Farrell, ''a forum for our best writers to contribute ... voicing a point of view about life in this country at this point in its history''.

In this book, Kirsty Gunn views parts of New Zealand life as Mansfield experienced it, and as she herself finds it after a prolonged absence in Great Britain. All the building blocks to connect with Mansfield are supplied.

Her living quarters are in Thorndon, she is surrounded by landmarks familiar to them both.

Although Mansfield was desperate to get away, she wrote that ''the place would always contain her''.

She was a writer who needed to leave home in order to write about it.

Through reading her letters, especially those written in the last four or five years of her life, Gunn perceives that what she she longed for was, ''a wholeness, unity ... some way of being at home, with herself, her place in the world''.

Returning to Wellington, Gunn is at home, and finds she is doubly connected with her subject.

She has left Dundee at the beginning of summer to arrive to a winter-darkened city lashed by wind and rain, so has initial doubts about her homecoming, which fade as she renews and explores her relationship with Katherine Mansfield.

She has been awarded the Randell Fellowship, which provides the cottage in Thorndon, a place which was not only home to Mansfield, but was where Gunn lived as a child; where her mother read her the stories that captured her imagination, where the beginnings of a lifelong identification with the author began.

This is critical, as she sees the importance of setting as pivotal in Mansfield's stories, anchoring them, and providing a starting point when identifying with her characters.

Gunn is well-qualified on several fronts to write on Mansfield. Reared on her stories, from being read them as a child by her mother, to studying them at high school and on to university, she has immersed herself in all that Mansfield has to offer.

She finds that this immersion - in familiar places, sights - inspires stories that are her own, but have their genesis in those of Mansfield and they are scattered throughout the book.

Some of them are dark.

When you read her story inspired by thoughts of The Doll's House, for instance, it seems to have many of the safe and familiar tones of the original, but contains a chilling message which distorts the feeling (often expressed in this book) of home being a place of refuge.

Gunn gives her readers much to think about, not only concerning new perspectives regarding Katherine Mansfield, but by eloquently putting into words why fiction is important, why stories don't have to be full of ''structure and pacing and overall shape''.

She reminds us that ''to be at home in the novel, not just looking on ... this is the mark of all great fiction''.