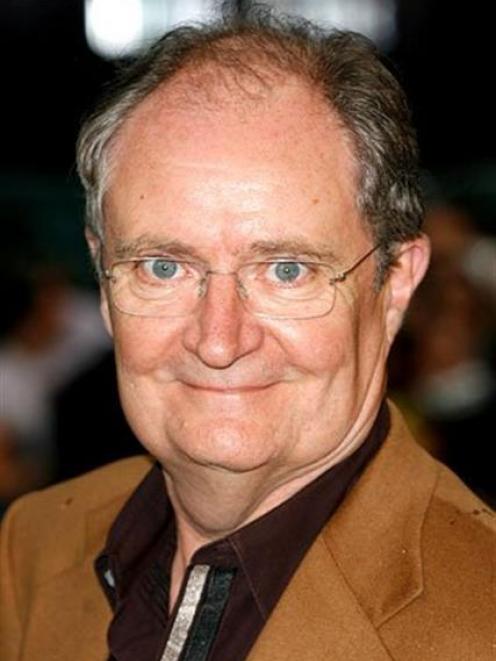 Jim Broadbent
The real honour roll at Hogwarts Academy in the Harry Potter films has nothing to do with child wizards and their magical aptitude: It is the list of esteemed British thespians who have been brought in to cast their spells as the colourful supporting players.

And do not think Jim Broadbent wasn't waiting for his call.

"Well, yes, you know, I was waiting," Broadbent said with a burr of mock indignation.

Broadbent has plenty of opportunity for vainglorious moments in his role as Prof Horace Slughorn, the latest faculty member to join the movie franchise, which (finally) returns later this year with Harry Potter and the Half-Blood Prince.

Sitting in his trailer, still in costume as the conniving but convivial Slughorn, Broadbent marvelled at the smooth gears of the powerful Potter machinery after five films and $US1.4 billion ($NZ2.5 billion) in box-office receipts.

"It's wonderful to be part of this now, to come in at this stage, because they've got it running so smoothly now, it's amazing to see," said the 59-year-old Broadbent, whose screen career dates to 1978.

"In the first one, I'm sure there was a bit of nervousness about whether it would all work, but now it's a unique position to be in, to be making a blockbuster without a lot of nervousness.

"It's hugely beneficial for the creativity to have a great deal of certainty about the process and the success."

Of course, Broadbent said this while on the set early last year, before Warner Bros shocked (and angered) fans by abruptly yanking Half-Blood Prince off the release schedule for November and moving the film to July 17, a move made for reasons of market positioning and box-office potential.

Broadbent, who calls Slughorn "a good man, a decent man, but a weak man", arrived at the Potter set after filming Indiana Jones and the Kingdom of the Crystal Skull.

If the success of the Harry Potter movies seems like clockwork, he said, it was because of gears set in place with the first film, in 2001.

There was the casting of the three main stars - Daniel Radcliffe, Emma Watson and Rupert Grint - who Broadbent said were "so contained and brilliant and professional", and the reverence for the source material, the books of J.K.Rowling.

"I saw the first film when it came out, and it was so brilliantly conceived," he said.

"You read the book and then you see the film and every moment you think, 'That is exactly how I imagined it.' It was not absolutely faithful, because you cannot be when you take it to film, but the feel and look of it was terribly meticulous.

"That care led to this great success. The reading audience has been satisfied with it and wanted more and gone along with it."