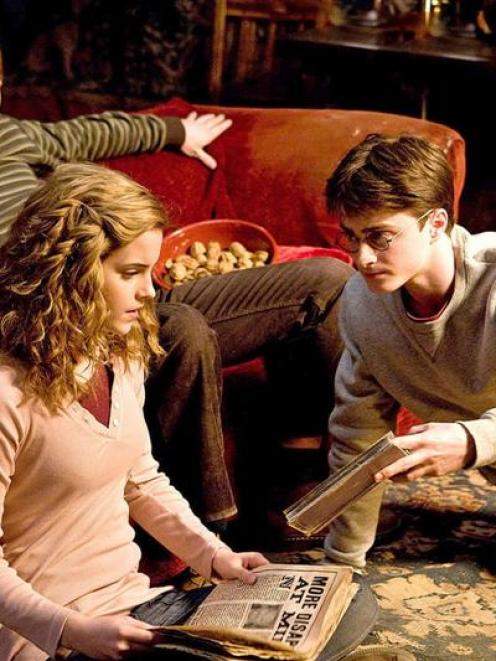 Our favourite boy (and girl) wizards return.
Admirable acting to be seen on the part of all, however the ending may not impress.

> Harry Potter and the Half-Blood Prince

We all knew it was coming but seeing it on screen is even more terrifying than reading it.

Yes, here in Harry Potter and the Half Blood Prince (Rialto and Hoyts) Ron Weasley (Rupert Grint) gets a bad case of girl germs.

In truth, with bands of death-eaters roaming freely we need all the laughs we can get over teenage infatuations.

The book was by the far the most gloomy Harry Potter with a real downer of an ending.

Making it an enjoyable movie was always going to be difficult.

Director David Yates, who joined the series with The Order of the Phoenix and is helming the two-part ending, does a competent job of hitting key plot points while keeping everything rolling along.

He gets good performances from his young performers.

Daniel Radcliffe has gained a new authority and just like Harry seems at peace with his role as the chosen one.

Interestingly, Tom Felton as bad boy Draco Malfoy has finally caught up in the acting stakes.

So at last we get a Harry Potter film where everyone is pulling their weight.

What does not satisfy is the very thing that up until now has saved the films: it too slavishly replicates the tone of the book.

Yates tries, inserting jokes at regular intervals but the ending defeats him.

We should end with a note of cautious optimism, instead the gravity of what they are all about to face overwhelms characters, film-makers and audience.

Best thing: As always it is the exceptional quality of the adult actors in the secondary roles. Michael Gambon, Alan Rickman and Jim Broadbent all in one movie is an embarrassment of riches.

Worst thing: If you do not already know who the Half-Blood Prince is, the film offers little assistance.

See it with: out the wizard's hat. If you must wear it, please take it off once the movie begins.