Kazan has definite ideas for character 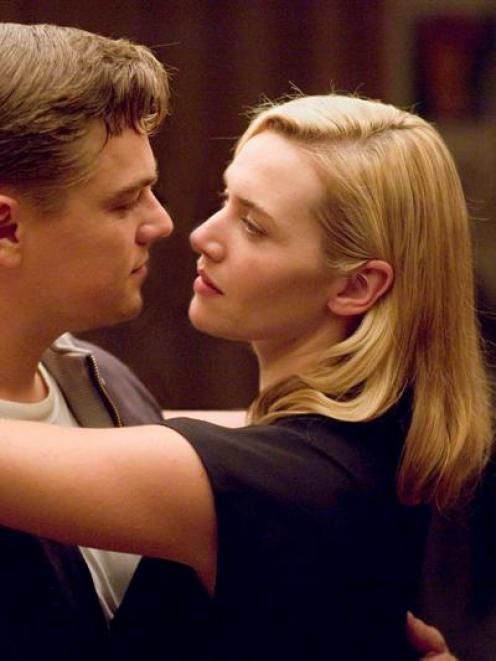 Leonardo DiCaprio and Kate Winslet (right) on the set of the film.
When Zoe Kazan was preparing to play saucy young secretary Maureen Grube in Revolutionary Road - the film adaptation of Richard Yates' novel about a young couple (Leonardo DiCaprio and Kate Winslet) trying to change their lives in staid 1955 suburbia - she had definite ideas about her character's appearance.

"I wanted her to look like she went to Sears Roebuck and bought three suits, two dresses, one pair of heels, two handbags and two pairs of gloves, then moved to New York City and gained five pounds," said Kazan, whose character ends up having a romantic fling with a New York corporate drone played by DiCaprio.

"The way I was thinking about her sexuality is that it is all accidental," Kazan explained.

"She's not getting dressed up thinking, 'I'm going to be a sexy woman at work today'; it's like she's got this blouse and skirt on, and it's pretty sexless, but it's a little tight in the [butt].

"So when she walks by, men look at her, and she's unaware of it. I wanted this woman to be totally unaware."

That the 25-year-old Kazan was so specific about such details isn't surprising, considering she comes from show-biz royalty.

Her grandfather was Oscar-winning director Elia Kazan (On the Waterfront), and her parents are screenwriter-directors Nicholas Kazan (Reversal of Fortune) and Robin Swicord (Little Women, Memoirs of a Geisha). Nevertheless, Kazan, who grew up in Los Angeles, describes herself as "a little theatre nut".

"I would read plays and put them on," she recalled.

When she tried out for plays in high school, she realised that she wanted to seriously pursue the craft.

Her parents were worried. "It's a tough life," Kazan said.

"They knew that. They were concerned at first, and then when I got older and more experienced and they saw I took it very seriously, then they started to get on board."

Kazan studied acting at Yale and graduated in 2005 with plans of returning there in autumn 2006 to attend graduate school in drama.

"I thought I'd have a year to better myself," she said.

"So I took acting lessons. I proof read for people to try and make money, and my parents helped me out, to sort of subsidise my life."

She also continued writing her first play, a family drama called Absalom, which she began her junior year in college.

Absalom is scheduled to be presented in spring 2009 at the Humana Festival at Kentucky's Actors Theatre of Louisville.

But Kazan's career path detoured in early 2006, when she did a play reading for a friend that was attended by her current agent.

Although Kazan told the agent of her college plans, "She said, `Work for us a while'."

Kazan got a tiny role in the thriller Fracture and gave up her studies.

"I couldn't picture going back to school," she said.

"I had just done one job, literally, and I felt I needed to be working right now. I found an apartment and looked for a day job."

But instead of landing a day job, she got a starring role in the 2006 off-Broadway revival of The Prime of Miss Jean Brodie with Cynthia Nixon.

She made her Broadway debut in January 2008 in the revival of William Inge's Come Back, Little Sheba and was in the Broadway revival of Anton Chekhov's The Seagull with Kristin Scott Thomas, which closed on December 21.

She was tenacious about playing Maureen in Revolutionary Road, especially after the casting director initially thought she looked too young.

Although director Sam Mendes wasn't as sure as his casting director, Kazan said, "I wasn't about to take 'No' for an answer.

"They let me put myself on tape again when I was in Los Angeles. from that tape, Sam wanted to see me again."

But this time, Kazan looked different when she met Mendes. "I had gone in every time gussied up like how I saw the character," she explained.

"Sam said, 'Just come in as you.' We just talked for an hour. It was really like having coffee with someone. I left thinking, `I might get this part.' And I did.

"It was really sort of an amazing experience."