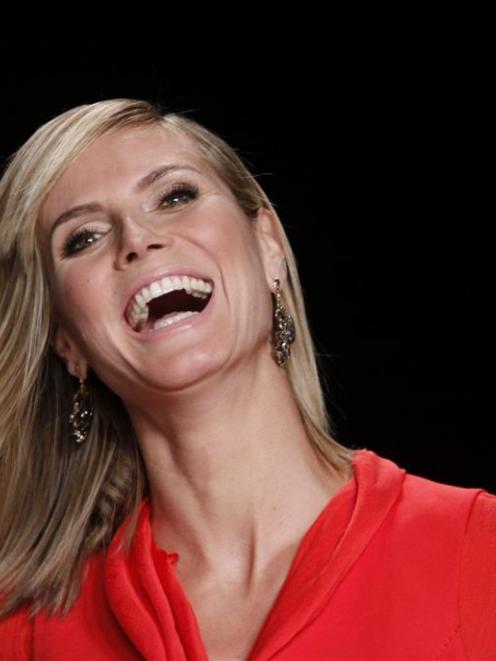 After all these years of modelling designer clothes and of judging wannabe designers on Project Runway, Heidi Klum has become very particular about her likes and dislikes.

"Sometimes I see our designers do things," the supermodel says, "and I'm like: `Really? That's what you came up with? You're not supposed to make clothes. You're supposed to make fashion!"'

Klum wasn't always so outspoken. In the early seasons of Project Runway, the reality/competition show on which she is host, judge and executive producer, she tended to hold back.

"I was maybe a little more shy," she says.

So much so that fellow judge Nina Garcia recently suggested that Klum has morphed into the show's "mean" judge.

"I say positive things when I see something positive. I give compliments to the designers who I think deserve it.

"But when there are things that I dislike, I tell them. But I'm not purposely mean."

It's just that her expectations are higher, she says, the same way viewers demand more from the show every year.

"That's what keeps us on our toes," she says.

We chatted with Klum about Season 7 of Project Runway.

Q: What is your favorite part of launching a new season?

A: Every time I'm intrigued to see how the designers are. We never really know what they're made out of when we do the casting.

The people come in and they bring their clothes. But have they really made those clothes? Did someone help them with this? How long did they spend on the garment they're showing? It shows pretty much in the first two episodes who has a lot of talent and who kind of slid into this thing.

Q: What do you think of this season's designers? Anyone in particular to watch for?

A: I never love to give too much away. But I think you can see five or six designers stand out.

We have a great group of people who are not just talented but also fun to watch.

I think it would be boring if they were as quiet as mice.

Q: How do you keep the show fresh after so many seasons?

A: It is hard. But there is always something new happening.

For example, we have one challenge that I'm very proud of.

I bumped into [London-based milliner] Philip Treacy at the Oscars and I said: `Why don't you come and do Project Runway? We've never had a hat challenge.' So he brought, like, 15 of his wildest, craziest avant-garde hats, and each designer got to choose a hat and design something that goes with it.

Q: Each season, something embarrassing inevitably happens on the runway. As a model, have you experienced a mishap on the runway?

A: I've never really had crazy things happen to me where my butt was out.

Well, on the runway for Victoria's Secret, my butt is out all the time! But nothing that was embarrassing, like I would fall or trip.

Q: Did you always have a passion for fashion?

A: In my school, my friends and my teachers were always looking at me funny when I was breaking out certain outfits.

I was always different in terms of the way I would dress. I was always a little out there.

I started a sewing class in school, and I would make clothes for my Barbies.

If I had not started as a model, I would have gone to design school.

That's been my passion for a long time

• The seventh season of Project Runway screens Thursday at 9.30pm on 3.