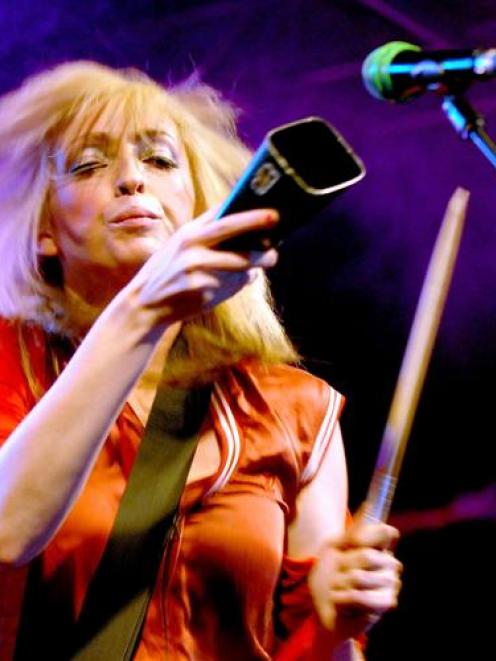 Most influential new sound
If there was any one definitive tone of 2008, it was not a genre, instrument or voice.

It was a $NZ670 pitch-correction plug-in from software company Antares that lends a robotic tang to vocals.

Auto-Tune burst into mainstream consciousness courtesy of T-Pain; now, you can't get through two songs on hip-hop radio without it.

Auto-Tune makes a voice sound expansive, uncanny and lonely. Quite a metaphor as the record business burns, no? -August Brown

Best excuse to invest in a fancy stereo

In the opening moments of Folie a Deux, Fall Out Boy announces, "Nobody wants to hear you sing about tragedy."

With left-turn melodies, multipart harmonies and a Cheap Trick-like knack for hooks, the band crafted one of the more exuberant, zany rock 'n' roll albums of the year. - Todd Martens

Best teasing out of a metaphor

How many times has a lover tenderised his pitch by using the word "baby"?

In Robin Thicke's funky seduction You're My Baby, he goes all the way with it, using the language of early parenthood to celebrate an utterly absorbing bond.

It's weird, but it works. - Ann Powers

If you haven't tuned into the Sundance Channel series Spectacle, find it.

Elvis Costello is the ultra-informed, congenial, sometimes provocative host, giving guests such as Elton John the time, respect and knowledge to explore music in a way that hasn't been seen for what feels like eons. - Randy Lewis

For the most part, Jolie Holland's albums have felt a lot like holiday china.

You're really glad it's there, but it's so lovely that it's difficult to pull it out very often.

That all changed with The Living and the Dead, an album in which Holland scuffed up her beautiful blend of smoky jazz and folk with flinty rock guitar and moodiness. - Chris Barton

Britney Spears would seem to be the comeback pop female of choice, but let's face it: She had MTV championing her every move.

Also, when Britney appears half-naked in a magazine, it's marketing.

But Cyrus recovered quite nicely with the largely fast and spry Breakout. - Todd Martens

Dido's first instrument was the recorder, and on the song Grafton Street, a chronicle of her beloved father's last days, she plays it with the ferocity Ian Anderson applied to his flute in Jethro Tull. - Ann Powers

Best UK No 1 that didn't flood the US

The Ting Tings seemed poised to break here, coming out of SXSW with buzz and an iTunes commercial.

They're not exactly an unknown entity, but the spunky single That's Not My Name hasn't become the inescapable hit on these shores as it has overseas. - Todd Martens

Best video that needs to become a Wes Anderson film

No matter how you feel about Vampire Weekend, the video for Cape Cod Kwassa Kwassa has got all the makings.

The plot is "goth girl goes to preppy party; catches guy singing to prom queen," which Anderson surely could find a way to over-direct.

Choice lines can be taken from the song: "Can you stay up to see the dawn in the colours of Benetton?" And hey, just use the band's name for a title - vampires are all the rage. - Margaret Wappler

With album sales dropping, it's nice to see at least two major labels - Capitol/Emi and Interscope - get their old-school hustle on (for certain artists, anyway).

Capitol/EMI gets the nod for breaking Katy Perry, while Interscope should be given credit for not giving up on Lady Gaga. - Charlie Amter

My Morning Jacket seriously overreached with the album Evil Urges, but never more so than on the falsetto-funk goof Highly Suspicious.

At least I hope it was a goof - there's never a good reason to write a song whose recurring lyrical theme is "peanut butter pudding surprise". - Chris Barton

Kanye West knows how to entertain.

His neon-lighted take on Stronger with Daft Punk at the Grammy Awards pumped life into a programme that had superstars singing with dead musicians.

And only the most hardened cynics couldn't be moved by his tribute to his recently passed mother with Hey Mama. - Todd Martens

For those who recently have thought about getting a tattoo, Tim Fite is here to save you.

His video for Big Mistake is delightfully cute yet slightly melancholic as it presents the imagined history of a grandpa who just happens to be peg-legged.

Oh, and he also might have survived bombardment from an army of feral cats. -Todd Martens

The biggest testament to Kanye West's star power was that he made avant-garde architecture buffs out of Top 40 hip-hop kids with his blog.

The same goes for Courtney Love, whose war on Ryan Adams, Lily Allen, shopping carts and punctuation littered the fields of MySpace with defeated foes, and for John Mayer, who redeemed Your Body Is a Wonderland by live-blogging himself baking a cake.

Yet the BMOC had to be Mobb Deep's Prodigy, who's documenting his three-year jail term for Vibe.

It's easily the most entertaining writing to emerge from the clink since Solzhenitsyn. - August Brown

Matt Wolf's documentary, Wild Combination: A Portrait of Arthur Russell, uses heartbreaking interviews and evocative stagings of scenes from Russell's life to capture the spirit of this musical seeker who died of AIDS complications in 1992. - Margaret Wappler.