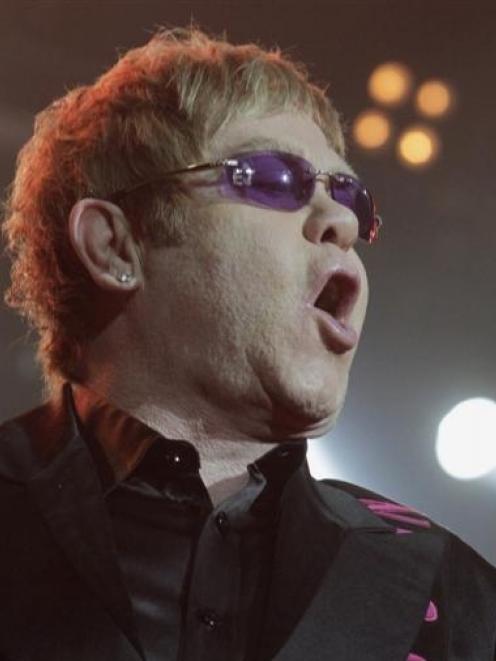 British singer Elton John performs on stage in Riga, Latvia earlier this month. Photo by Reuters.
Last month, Elton John played his 3000th concert (at Caesars Palace, Las Vegas). Now he's about to head to Dunedin for a concert that offers the statistically inclined musician the chance to add another entry to a long list. Shane Gilchrist asks the chart-topping, globe-trotting performer a few questions.


Q It is claimed your forthcoming Dunedin concert will be the most southern date you will have performed. However, I'm sure you've played more exotic (read strange) locations. Can you recall a few such performances?

As well as hundreds of sports-related stadiums, I've also played food and drink-related venues such as the KFC Yum! Center and the Dunkin Donuts Center America, the Coca-Cola Dome in South Africa and the Hope Estate Winery in Australia.

I've played breathtaking historical sites such as the Mayan ruins at Chichen Itza in Mexico, the Temple of Ephesus in Turkey and the Coliseum in Rome, and I'm looking forward to getting away from the English winter by playing in the sunshine in beautiful Honolulu, Hawaii, in January.

As a lifelong compiler of lists and recorder of statistics, I enjoy milestone achievements, such as my Vermont concert in July 2008 when I achieved playing at least once in all 50 states of the USA. Then in October this year I played my 3000th concert, at Caesars Palace in Las Vegas. Now I'm trying to break the record for the number of countries played, and so later this year I'll be playing for the first time in Indonesia and Malaysia, and next year I'll be playing my first ever concerts in Peru, Costa Rica and Panama. 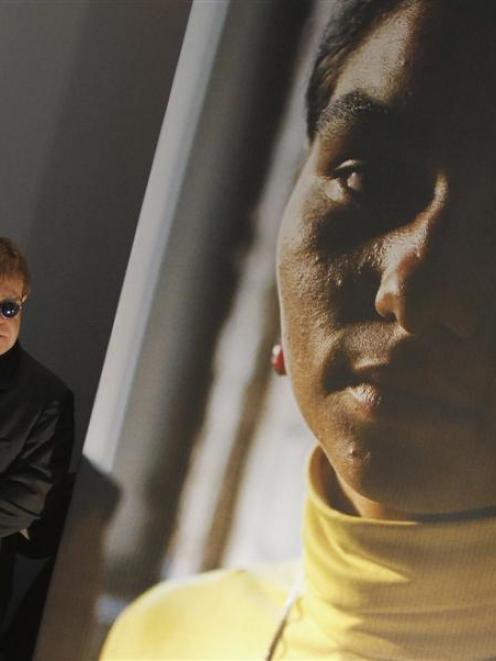 Elton John, founder of the Elton John AIDS Foundation, at a briefing in Kiev earlier this month with Ukrainian philanthropist Olena Pinchuk. Together they have launched a project seeking to help homeless young women affected by AIDS. Photo by Reuters.
Q Do you have a rough set-list in mind, or do you like to keep audiences guessing? Will the Dunedin concert be a mix of career classics as well as some newer material, perhaps songs off your last album, The Union (with Leon Russell)?

A We try to create a set list that will please everyone. These days, concert tickets are certainly not cheap, and we strive to put on a show that is worth every penny of the ticket price. So if you are coming to my show for the first time you can expect to hear the big hits, lots of songs you know, and also one or two lesser-known album tracks from both my recent and early albums.


Q The Union and your debut album, 1969's Empty Sky, might be separated by some 40 years, yet there seems to be an enduring musical connection that can also be found on albums such as 1972's Honky Chateau, a spirit of the American South perhaps? Have you always been drawn to such music; eg, rolling pianos, earthy rhythms, brass sections and gospel choirs?

A In a word, yes. [Co-writer] Bernie Taupin and I have always loved both country and gospel music and, in fact, on the very first day of the recording sessions for The Union, [producer] T Bone Burnett sat us all down and played a wonderful recording of gospel singer Mahalia Jackson at the Newport Jazz Festival. I like to think the spirit of that recording permeated the sessions.


Q Did those sessions with Russell and, significantly, too, Burnett, perhaps remind you of the primal power music can have? That is, without all the hype/trappings of the entertainment industry, do songs and performances require honesty and artistry if they are to be judged of lasting value?

A Yes, because I am, and always have been, a musician - it's both my job and my life. So to be working in the studio with Leon, my all-time musical hero, and to have T Bone bringing his extraordinary production talents and musical pedigree to the project ... for me that is the ultimate combination of integrity and honesty. And we haven't even mentioned the session musicians - all hand-picked by T Bone for their consummate playing skills. 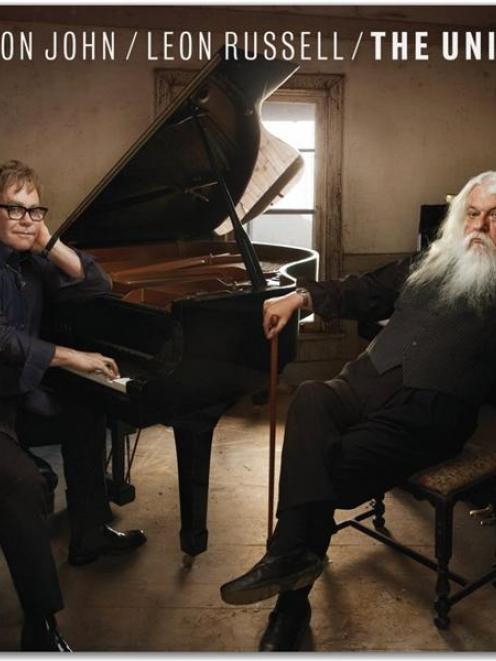 <i>The Union</i>
Q The honky-tonk trappings of The Union aside, are you still a sucker for a good ballad (aren't we all)?

A Definitely. In my new Las Vegas show, "The Million Dollar Piano", I've brought Blue Eyes back into the set. We haven't played that one for many years, but the audiences certainly seem to enjoy it. I love all the ballads on The Union; I'd be hard-pressed to name my favourite.


Q Goodbye Yellow Brick Road (1973) and Captain Fantastic and the Brown Dirt Cowboy (1975) are often held up by critics as two landmark albums in your career, but are there other records that resonate more strongly with you - either for artistic or personal reasons? Are there any albums, or songs, you feel have been overlooked and are worth re-exploring?

Captain Fantastic is another of those statistics I love so much: the first album ever to enter all three American charts at Number One.

Lately I've been playing songs from (1971 album) Madman Across The Water - the title track, Tiny Dancer and Levon, and we have also included Indian Sunset in the new Las Vegas show.

I guess different albums resonate at different times. The Empty Sky album contains what I always think of as Bernie's and my first decent song, Skyline Pigeon, and then I love The Union because it not only reunited me with Leon Russell but it turned out to be exactly the album I hoped for. My entire studio album catalogue lies in between those two, and each one of them has some special association.

I am very fortunate to have always been perceived as an album artist, and so my album tracks have been played regularly over the years, and not just the hits. However, aside from the very well-known early albums, if you were new to my catalogue I would recommend Blue Moves, Too Low For Zero, Made In England, Songs From The West Coast and, of course, The Union.

The man knighted Sir Elton Hercules John in 1998 began life as Reginald Kenneth Dwight, in Pinner, Middlesex, England, on March 25, 1947. He was the son of the late Stanley Dwight and Sheila (now Farebrother).

He began playing the piano in 1951 and on leaving school immediately began walking a path in the music industry, spending the years 1959-64 as a student at the Royal Academy of Music.

He joined his first band, Bluesology, in 1965, staying with it until 1967. He would later take his stage name from Bluesology saxophonist Elton Dean and the group's charismatic frontman, Long John Baldry.

Elton John was introduced to Bernie Taupin in 1967 by Ray Williams at Liberty Records. After collaborating by mail for their first compositions, in 1968 they became staff songwriters for the DJM label, supplying music to budding pop stars.

After the 1969 release of debut album Empty Sky, the duo made 14 albums in a six-year period from 1970 to 1976 with producer Gus Dudgeon at the helm. These included Elton John, Tumbleweed Connection, Madman Across The Water, Honky Chateau, Don't Shoot Me, I'm Only The Piano Player, Goodbye Yellow Brick Road, Caribou and Captain Fantastic And The Brown Dirt Cowboy.

Of these, 1973's Goodbye Yellow Brick Road, with its string of American No 1 hit singles and unbroken two-month run at the top of the Billboard Top 100, became a classic and 1975 effort Captain Fantastic and the Brown Dirt Cowboy was the first album to enter the US Billboard Chart at No 1.

In 1974 Elton performed on John Lennon's comeback single Whatever Gets You Through The Night, and later that year was joined by Lennon onstage at New York's Madison Square Garden.

This performance, cited by Elton as one of the most memorable of his career, was to be Lennon's final concert.

In the late 1970s the pianist's partnership with Taupin came to a temporary standstill, and he worked with other lyricists before reuniting with Taupin in 1980 for the album 21 at 33, followed by 1982's Jump Up!, which featured the single Blue Eyes and Lennon tribute Empty Garden (Hey Hey Johnny).

A year later came Too Low For Zero, featuring two tracks Elton regards as live favourites - I Guess That's Why They Call It The Blues and I'm Still Standing, his valedictory song to years of alcohol and substance abuse.

In 1984 he married Renate Blauel, a relationship that was dissolved in 1988. He has been in a civil partnership with David Furnish since December 21, 2005.

His collaboration with Tim Rice on music for Disney's 1994 film The Lion King earned a Best Male Pop Grammy and also an Academy Award.

Billy Elliot The Musical, with music by Elton and lyrics by Lee Hall, was launched on the London stage in 2005.

The late 1990s were a time of personal tragedy for Elton, with the loss of friends, fashion designer Gianni Versace and Diana, Princess of Wales, whose death prompted the reworked single Candle in the Wind 1997, a tribute that has sold more than 33 million copies.

In 1998 Elton received a knighthood for "services to music and charitable services" and became Sir Elton Hercules John, CBE.

In 2004 Elton and his band began a residency with The Red Piano show at the Caesars Palace Colosseum in Las Vegas.

Originally booked for 75 shows over three years, The Red Piano proved so popular that the contract was extended for an additional 166 shows.

In September 2005 Elton marked the 30th anniversary of the release of Captain Fantastic and the Brown Dirt Cowboy with a new deluxe CD version of the album, and a series of special concerts in the US.

On March 25, 2007, he celebrated his 60th birthday while breaking his own record with a 60th concert at Madison Square Garden in New York.

In November 2008 Billy Elliot the Musical opened at the Empire Theatre, Broadway. It received a record 10 Tony Awards in 2009, including Best Musical. Billy Elliot has also had runs in Sydney, Melbourne, Chicago and Toronto as well as touring North America.

• Film compositions: The Lion King, 1994 (Best Original Song Academy Award for Can You Feel the Love Tonight?); The Road to El Dorado, 2000.