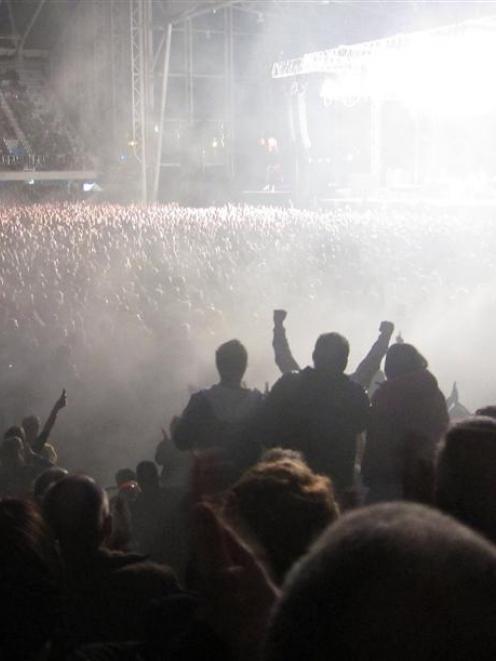 Gusts of up to 130kmh hit the city on the night of the concert.

"It's nothing to do with the sound system or the venue," he said.

Pressed on that response, Mr Sprey said he had "the best sound engineers walking round the venue making sure everything was all right".

Those engineers had told him the problem with the wind was in the way it was coming through the entrance tunnels, and the angle it was hitting the roof, meaning there were changes in pressure inside the stadium, which affected the sound in some places.

"At times, there were big gusts of wind hitting the roof, which makes the roof beat like a drum, but there's nothing you can do about that."

Dunedin Venues Management Ltd chief executive David Davies backed up his explanation, and said atmospheric conditions had a big effect, for instance, on who was affected by sound outside a stadium.

"I would point out it was an extreme situation," he said.

Mr Davies apologised to anyone who was affected by the issue, but noted the concert would have been far more unpleasant if there was no roof on the stadium.

Mr Sprey said Sir Elton had enjoyed the concert so much he played for 20 minutes longer than usual.

"He was thrilled with the concert. He had a ball of a time.

"He played much longer than in any of his recent concerts and he only does that when he's having a really good time.

"If he's getting good feedback, he'll keep going and he probably played another seven or eight songs more than he usually does," he said.

"This was the first big international act in the stadium and it went very well. Out of the four times I've had Elton, this has been the easiest of the lot. All his crew and band were very impressed with the venue."

The star was conservative in his requests, Mr Sprey said.

"Sir Elton had a very mild rider, but the dressing rooms were like five-star hotels.

"Dunedin looked after him very well. Furniture Court supplied all the furniture for him and Carley Jones at St Clair provided all the flowers."

Mr Davies said the Forsyth Barr Stadium pitch stood up well to the rigours of 13,000 seats and spectators.

"There was a little bit of bruising, but there was also some bruising to the grass after the ODT concert."

He felt licensed bars in the venue had coped well with the crowds, apart from a "system failure" in the North Stand bar.

Queues of over 100 people and waits of up to 45 minutes for drinks were "not unreasonable" for a bar servicing 13,000 people, Mr Davies said.

He said there would always be a compromise between adding more facilities and maintaining safe evacuation strategies.

Police said there were few problems with the crowd.

"It was a fantastic crowd and a fantastic event for the city. I couldn't praise it more," Senior Sergeant Gavin Briggs said.

There had been one arrest at the event, for the alleged assault of a policeman who intervened in an altercation.

There was some traffic congestion following the event, "but that was the reality of having 35,500 people in the area", Snr Sgt Briggs said.

St John Ambulance reported a middle-aged woman had a "medical event" at the concert and was taken by ambulance to Dunedin Hospital, where her condition improved.

"I've been to concerts at the likes of Wembley Arena, Wembley Stadium, even with 100,000 at Hyde Park in London, and the atmosphere at Forsyth Barr Stadium was just as good"
- Talei Anderson, Dunedin

"I have been to many concerts indoor and out in Australia and New Zealand and this was fantastic. Didn't have to pay for flights or accommodation"
- Margot Love, Dunedin

"The sound was horrible. The worst I've heard at a concert. Half the time you couldn't even hear Elton's voice"
- Tristan Murray, Dunedin

"Very frustrating not hearing what he [Elton] was saying, but have never had this happen at other venues or concerts I have been to"
- Angela Gilchrist, Dunedin

"We couldn't see the screens for most of the concert from the pitch, as the people from the back all surged forward and blocked them"
- Judy Walker, Dunedin