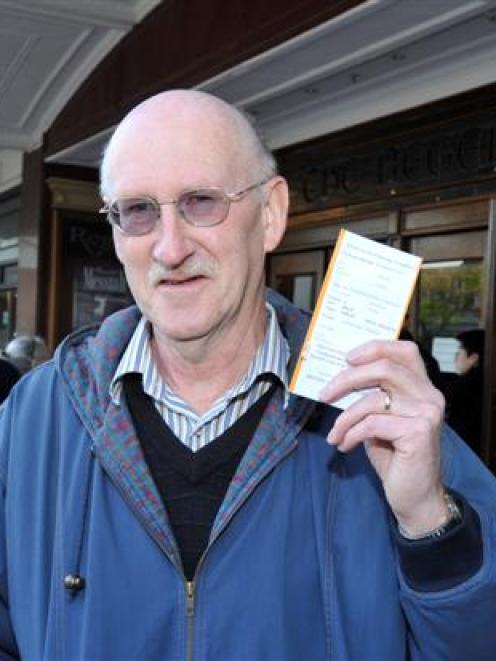 Bruce Marshall, of Dunedin, flashes his reduced price Elton John concert tickets outside the Regent Theatre yesterday. Photo by Gregor Richardson.
Elton John's Dunedin concert next Friday will be a sell-out, with the last tickets sold for a reduced price yesterday.

The final premium seats were advertised in the Otago Daily Times yesterday for a flat rate of $120.

There are only a few hundred left and they're scattered all over the place in twos and threes, so people don't get a choice of where they're going to sit," Capital C: Concerts managing director Phil Sprey said yesterday.

All other categories sold out two months ago, he said.

"We've made some slight modifications. We're putting a few more hanging delays and things in. It's like insurance, so we've thrown a bit more money at it. We didn't have to do it, but we want to make the concert as spectacular as we can.

"It's the first major artist at the stadium and it's a big footprint for Dunedin and we want to get into the spirit of it.

"You're going to get the best possible sound system that stadium can possibly have. But you can guarantee there'll still be someone, somewhere though who will still complain about the sound."

Bruce Marshall, of Dunedin, was the first of about 20 people who queued for the reduced price tickets at 9am yesterday.

"I'm going with my wife, Gwenda, and a couple of friends.

We weren't going to go, but we've got half a dozen friends from out of town staying with us, so we thought we'd go along too," he said.

"I'm an Elton fan. I've got some old LPs at home, although I probably last played them a couple of years ago. He's a real entertainer. It sounds like it's going to be a full stadium."

"We put big ads in the Auckland papers last weekend, but there are hardly any sales out of Otago.

"Accommodation is the problem. Dunedin has reached saturation point.

"This has been a learning curve for all of us.

"There are going to be more people in Dunedin for Elton than for any of the [World Cup] rugby games. We're probably going to get 35,500 in there."

"It's very tight. Most motels have no rooms available at all," Mr Hanning said yesterday.

"We've had bookings coming in for Elton John for a while and we've had The Hobbit crew in town, which has exacerbated the problem. Often, we get several events on at the same time. That's what creates the issue.

"There's a large building industry trade show on in Dunedin this weekend and they're having to accommodate their suppliers in Invercargill."

Enterprising Dunedin property owners cashed in on the accommodation shortage by renting out their homes for up to $600 a night during the Rugby World Cup.

"There's still heaps of accommodation left. We've got 100-plus beds available at halls of residences and there are bed and breakfasts available within 15 minutes of town.

"Even in the two big Rugby World Cup games here, nobody went without a bed."

Tourism Dunedin figures show Dunedin has about 2100 rooms, including hotel, motel, dormitories, farmstays, homestays, and private rooms, such as B&Bs, available, which can accommodate up to 6325 people.