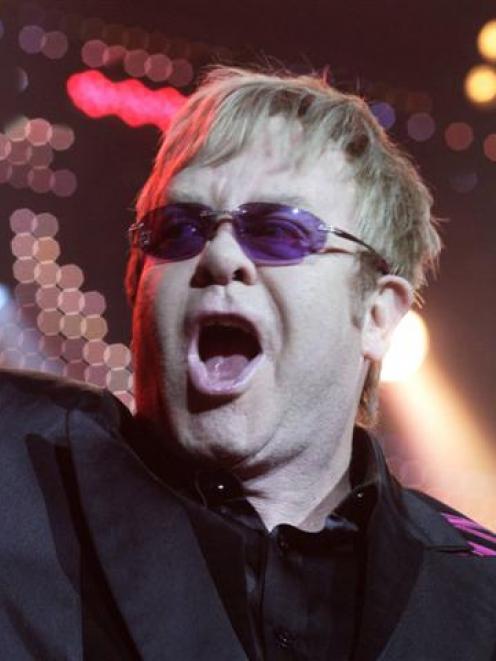 Elton John in concert earlier this month. Photo by Reuters.
Elton John will fly out to Sydney immediately after his concert at Forsyth Barr Stadium in Dunedin on Friday night.

But Dunedin people should not feel miffed - the peripatetic performer has not stayed in New Zealand the last four times he has been in the country, Capital C: Concerts managing director Phil Sprey says.

Sir Elton and his entourage of 38 will travel by private jet to Sydney, where he has a concert on Saturday night.

Mr Sprey said the 64-year-old singer had an international touring schedule much more hectic than those of many artists a quarter of his age.

He confirmed earlier reports Sir Elton would not be accompanied by his 11-month old son, Zachary. However, Mr Sprey has had plenty of offers from people keen to babysit.

"I could write a book about the bizarre requests I get."

Although there are still some $120 seats for sale, Mr Sprey would not give the numbers but said he would be surprised if there were any tickets left by tomorrow for the 35,000-capacity show.

Mr Sprey said the build-up for the concert would begin today. A convoy of trucks from Auckland was bringing equipment, with "bits and pieces" including sound equipment and 14,000 seats.

He said all involved with the production were used to catering for the different characteristics of venues.

The singer had his own sound engineers and "we supply them as well".

"He's got some of the best sound engineers in the world."

As well as the performer's 38-strong entourage, Capital C: Concerts had about another 60 people involved with the production, not including stadium staff.