One the Floor: Stages of the play 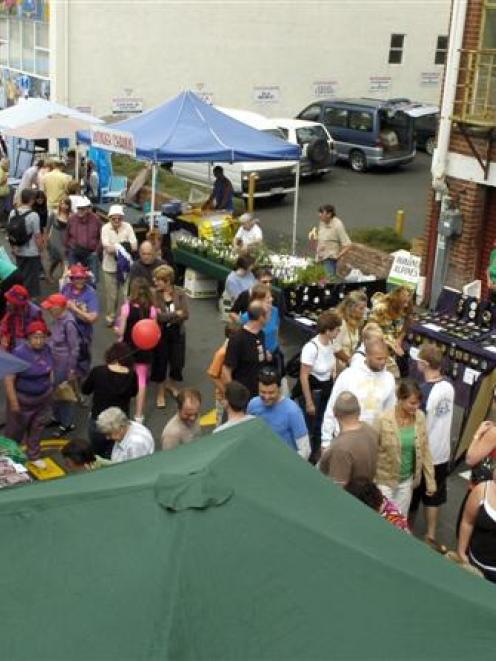 Thieves Alley, Bath St, last year.
Event organiser Hazel Murtagh is used to juggling bands, timetables and even stages, and it's a skill she has brought to the fore co-ordinating today's Thieves Alley Market.

There will be four stages, each hosting a selection of bands.

Murtagh says the Princes St stage will be the "world music" stage, beginning with a Scottish piper at 10am, who will play for the first 10 minutes - providing there are no noise complaints.

A procession of pieces from around the world follows, with items from France, Germany, Korea, the Cook Islands, Africa, China and elsewhere.

The "ZM stage", co-ordinated by John Dodd, of Logan Park High School, features the best of the up-and-coming bands from arguably the city's most musical school, along with continuity from ZM DJs.

Music teacher Gladys Hope and pupils open the day, just after 10am, then the Logan Park High School groups begin at 11am with Hoodoo Voodoo, which John Dodd describes as jazz and jazz rock-inspired. The seven-piece band features baritone and alto saxes, trombone, double bass and drums.

Things on the ZM stage go more than a little gypsy, with Baby Yaga playing a set of klezmer music from 12.15pm.

Another band from Logan Park High School may well take its name from expeditions to St Clair or St Kilda beaches. Sewage is described by Dodd as an "alternative rock band, unplugged".

The ZM stage wraps up with a jazz band from Bayfield High School.

The fourth stage will feature a Mad Hatter's Tea Party.

The Thieves Alley Market itself will have more stalls than a learner driver on Baldwin St and wandering entertainment from street performers.

•If a fun day out for all the family isn't quite your thing, local entrepreneur and music producer Ollie Crawford is bringing English duo Commix (George Levings and Guy Brewer) to Dunedin's Bath Street.

Commix formed in Cambridge, and released debut album Call To Mind on the seminal Metalheadz label.

Call To Mind has been described as "the sound of 2007", with Crawford adding "it's tough to recall a drum-and-bass record that is quite so successful at marrying the beautifully listenable and the gloriously experimental".