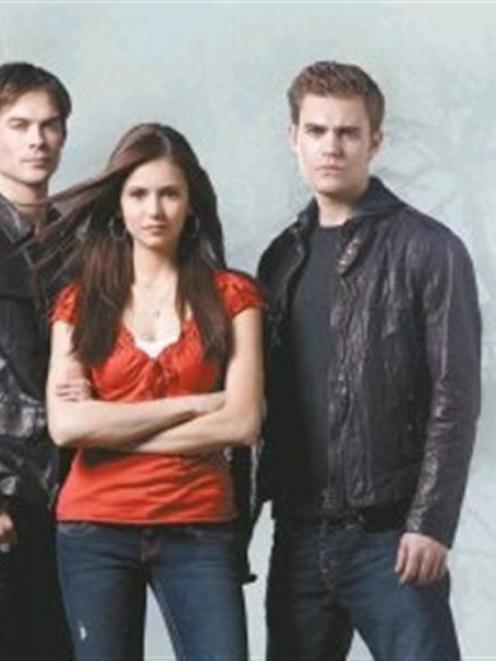 For months people have been anticipating The Vampire Diaries as a televised version of Twilight with a bunch of sensitive young lovelies yearning and burning for danger, and a little romance with bite.

In between bouts of underage drinking, texting, girl-bonding and the inevitable minor-key whine of a soundtrack, that is. True Blood Lite or Transylvania 90210.

Because Vampire Diaries, which premieres on Thursday, knows precisely what it is - a Gothic romance - and doesn't try to be anything else.

It's not going for a spangly skinned update of The Catcher in the Rye or a pretentious political metaphor or even a through-the-mirror-darkly Christ myth. The Vampire Diaries is a good old-fashioned love story with vampires.

And that's just the first episode.

Seriously, all that's missing is Barnabas Collins with his thin-lipped smile and wolf-head cane.

Ah, Barnabas, who will forget your tortured cries when Josette leapt to her death rather than succumb to your kiss of eternal life? Not executive producers Kevin Williamson (Scream, Dawson's Creek) and Julie Plec, that's for sure.

Tim Burton and Johnny Depp may be literally resurrecting the fabulous Dark Shadows, but tonally, The Vampire Diaries got there first.

Let the other franchises sniff with disdain at mouldy old genre conventions, The Vampire Diaries stacks them up like corpses in a mausoleum and dances howling on the roof.

Duelling diaries and anguished voice-overs compete with emo-soundtrack tunes while amid the forest primeval, girls vamp and the vamp broods (someday we will have a torn and troubled female vampire as a protagonist, but that day is not today).

To a small town Southern enough to have had its own Civil War battle, Stefan (Paul Wesley), a 200-year-old vampire, has returned.

He "knows the risks" of such a move but cannot live without "her".

"Her" is Elena (Nina Dobrev), recently orphaned (how Gothic can you get?) and with the requisite beauty.

Burdened by grief and the drug-related antics of her brother Jeremy (Steven R. McQueen), Elena nonetheless manages to engage in some serious back-to-school eye-lockage with new kid Stefan, who's busy battling his very nature to not drain the blood from her body.

But what is Abel without Cain? What is Edgar without Heathcliff? Stefan may not be responsible for those recent "animal attacks", but someone is, and that someone is his wickedly blue-eyed brother, Damon (Ian Somerhalder, Lost).

"I liked what you did with the face," he taunts after Stefan goes all red-eyed and vein-riddled before pushing him through a window.

Although the show deviates more than a bit from the L. J. Smith books on which it is based, the essential love triangle between Elena, Stefan and his brother Damon should be assembled by the end of episode two, three at the latest.

Add a best friend who may be turning psychic, an Adonis-like ex-boyfriend, his troubled sister and would-be-rapist wingman, and the jealous classmate, and you have a potential page-turner of a show.

It may not be art, but it's as much fun as an ice-cream social in a cemetery, complete with the rustling chill of crows' wings overhead and the eerie outline of the campus cutie with strange vermilion eyes emerging from a sudden swirling mist.

• The Vampire Diaries premieres Thursday at 8.30pm on TV2.