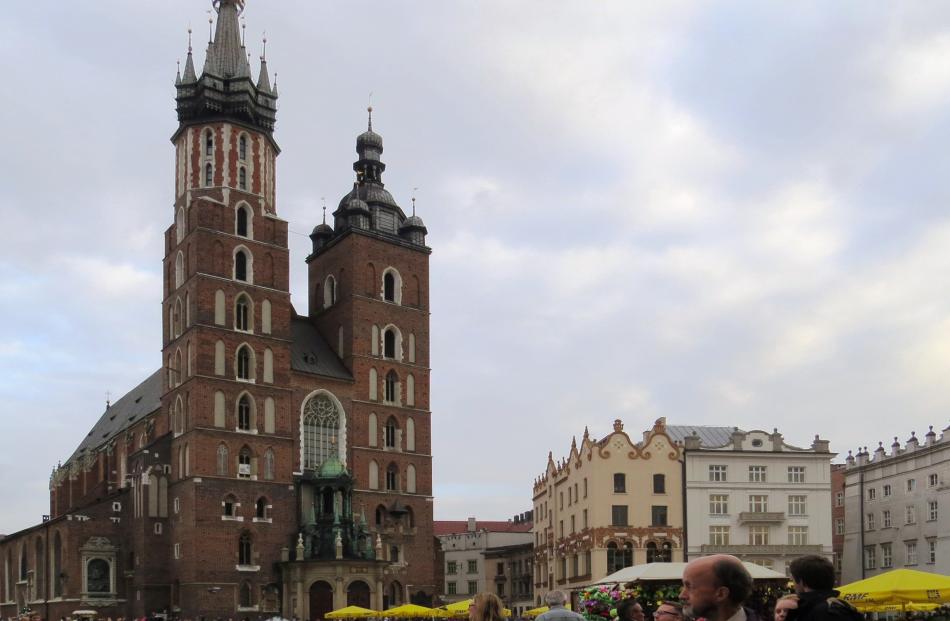 In Market Square, a bugle player can be heard every hour on the hour. It was immortalised in the book by Eric P. Kelly, The Trumpeter of Krakow, which won the 1929 Newbery Medal as the year's most distinguished contribution to American children's... 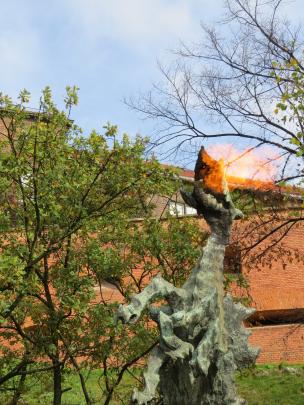 The Warwel Castle dragon and its fiery breath.

Another of the world's cities of literature, Krakow has a storied history, Heather Hapeta writes.

Once upon a time, a fire-breathing dragon with a taste for young female flesh lived in a cave in Krakow, according to Wincenty Kadfubek (1161-1223), Bishop of Kracow and historian of Poland.

When nearly all the city's young girls had been eaten, the King promised his daughter's hand in marriage to anyone who could kill the beast.

The legend reports the Wawel Dragon was finally slain by a cobbler's apprentice who fed the creature a roasted lamb which he had stuffed with sulphur and hot spices.

After the dragon had devoured the tasty sacrifice a powerful thirst hit him so he went to the river to drink.

As with all good stories, on his wedding day, to Princess Wanda, the poor apprentice lad was fittingly renamed, Prince Krak, Dragon Slayer.

Today, the dragon's den, in the 12 million-year-old cave at the base of Wawel Hill, and a fire-spouting dragon statue, are both part of Krakow's literary trail, which celebrates its status as the world's seventh Unesco City of Literature.

Wawel Hill, home to the Royal Castle, is a favourite setting for many a national myth and legend and when I first saw it, on a grey monochrome morning, I could well believe the stories of supernatural powers held by a mysterious chakra discovered there in the 1st century.

Dunedin knows, as now the eighth city of literature, in order to become a Unesco City of Literature, there are several requirements in terms of the quality and diversity of initiatives.

They include the role of literature in its broadest sense in the everyday lives of the city's inhabitants, a range of festivals and literary events, and an abundance of bookshops, libraries and other institutions involved with books and literary heritage.

Some of Krakow's claims for being considered a literary capital were that the first Polish-language books were published there in the 16th century, and that it was the first Polish city to hold scriptoriums, libraries and printing houses.

As a book lover in Poland at the end of the tourist season, I was disappointed not to be able to take one of the monthly guided literary walks.

It was even more disappointing that despite two emails to the literary and tourism websites, I received no response to my request to hire a guide for an individual tour of the literary hotspots.

It's very easy to overpromise and underdeliver. To add to the difficulty, the tourism office in the city square did not have the brochure-map either - they sent me to another office where I was given their last English one.

There are 61 points of interest detailed on the map, covering historical sites, literary addresses, libraries and bookstores, literary cafes, literature in public places and, Nowa Huta, a 1949-built city for the workers.

Until this year, this area was home to the annual Krakow Book Fair, Poland's most important meeting of readers and some 500 Polish publishers.

Portrayed as an ideal city in Stalin-era literature, it has been the setting for many poems and human interest stories.

Alongside the book fair, the Conrad Festival takes place.

A prestigious literary event, it's considered one of the most noteworthy occasions in this part of Europe and has attracted crowds of readers for many years.

Outside the old city wall, the moat has been filled in, providing a ring of green - Planty Park.

As well as monuments to writers and other artists, it is also home to dozens of benches honouring writers with connections to the city.

One easily recognised was Thomas Keneally, author of Schindler's Ark, the 1982 Booker Prize-winning novel that was later adapted to film as Steven Spielberg's Schindler's List.

QR barcodes on all seats helpfully link the visitor to virtual collections of text and recordings of the specific author. Of course, Oskar Schindler's enamel factory is on the self-guided walk too.

There are close to 80 bookstores and almost 30 antiquarian bookshops in the city, with one of the buildings in Market Square housing a bookshop continually since 1610.

I walked to the Massolit Bookstore hoping to talk with one of the three expatriate owners about the literary meetings, events and political debates which are held there.

They were not available so I did what time-rich travellers do and just sat, enjoying coffee, a chocolate brownie, international newspapers and the old-world ambience.

In the main Market Square (where you can spend hours) every hour, on the hour, a bugle plays from the four points of the compass in the high tower of St Mary's Basilica, and this too has a literary connection.

It was immortalised in the first book by Eric P. Kelly, The Trumpeter of Krakow, which won the 1929 Newbery Medal as the year's most distinguished contribution to American children's literature.

An American journalist, academic and author of children's books, he was briefly a lecturer at the Jagiellonian University in Krakow.

Interestingly too, Krakow is part of the International Cities of Refuge Network and, in the Villa Decius, one of the Renaissance complex sites of literary and cultural salons, a refuge is provided for persecuted writers.

Finally, two Nobel Prize winners in literature had their homes in Krakow: poet Czesfaw Mifosz (1980), who returned after many years in exile, and poet essayist Wisfawa Szymborska (1996), until her death in 2012.

I only wish I had been able to get a deeper insight into this walkable city's past, present, and undoubtedly bright literary future.