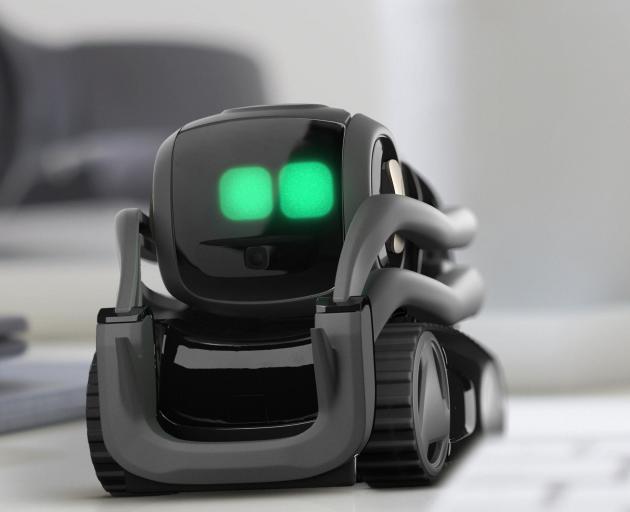 Vector, by Anki, is a friendly, inquisitive robot packed with artificial intelligence software. Photo: supplied
My 17-year-old caught sight of the cute, little robot responding to a request to pick up an object.

"Whoa!'' he exclaimed. "Look at the amazing vectors he is calculating to be able to move around like that!''

Vector. That is the name of the friendly, fist-sized, super-intelligent robot recently released by Artificial Intelligence (AI) toy developer Anki.

The people behind United States-based Anki aim to be at the cutting edge of home robotics. Their catch phrase - "We create robots that move you.''

Vector moves us by moving himself - a chirping, talking, wide-eyed bundle of autonomous software on caterpillar tracks.

He can recognise faces, learn names, explore his environment, tell you the weather, do tricks ... and even climbs back on his recharging dock when his battery is running low.

To do all that, and more, they have discretely packed Vector full of high-tech features.

He has an infrared laser sensor to detect objects and obstacles. He has a high definition camera to see you and his environment. He has four microphones to help him work out which direction your voice is coming from. He has a capacitive touch sensor on his back to feel when you touch him. He has bulldozer-style arms to lift his cube, give you a fist bump or express his joy or frustration. And, of course, he is Wi-Fi-capable to answer your questions.

Say "Hey Vector'' and he will look at you. Ask him to go find his cube and he'll do that. Want to know the weather outside or how far it is from Auckland to San Francisco? He'll tell you. Put him on a table and he won't fall off. Pat him and he'll purr like a robotic cat.

Vector is surprisingly engaging. Other activities can fall by the way because everyone wants to tell him their name, ask him to do a trick or watch him dance to the beat of whatever music is on. But he is also happy doing his own thing, just moving around, chirping to himself, waiting for the moment you call his name.

• Vector, by Anki, RRP $500, includes robot, cube, charging port and USB cable. Users need a compatible device such as a smartphone for initial set-up, a compatible Wi-Fi modem and a USB power adapter.