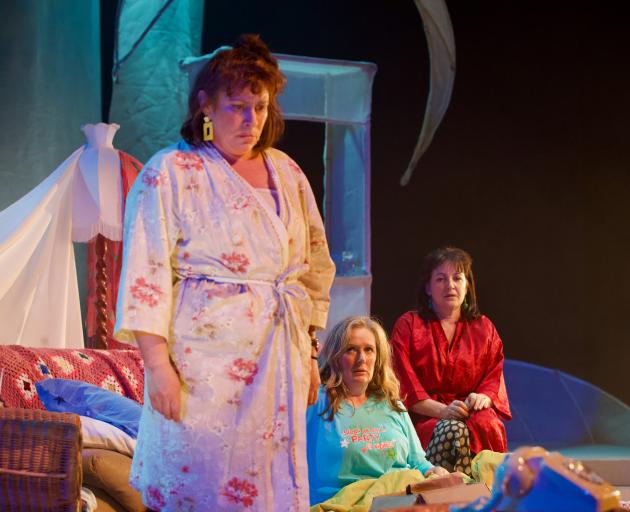 Julie Edwards, Lara Macgregor and Jodie Dorday relieve their late teens in Di, Viv and Rose.PHOTOS: SUPPLIED
Presenting the first full-length professional play to open in New Zealand since Covid-19, the producer and cast behind Di, Viv and Rose have taken a big gamble. Rebecca Fox talks to its Dunedin cast members Lara Macgregor and Julie Edwards about friendship and anti-inflammatories.

Reliving their late teens 30 years later has been a bit harder than expected for the cast of Di, Viv and Rose.

"It’s friggin’ exhausting. I’m a shadow of my former self," actress Lara Macgregor, who plays Di, a sports-loving lesbian, says.

The play, by English playwright and comedian Amelia Bullmore, was first staged in England in 2011 and spans the 30-year friendship of three women, from when they were 18. A lot of the show focuses on their younger selves in the 1980s.

"I do a back spin, a caterpillar, we thrash it out to Billy Idol."

They are aware that many in the arts have been watching closely to see how they go and if audiences are ready to return to the theatre.

Many of the main theatres around the country are still closed as they struggle with the problems caused by Covid-19 and try to work out what people want to see.

"It’s been a gamble. People might not want to come back."

The journey to staging the show started a few years ago when Macgregor, then artistic director of Fortune Theatre, read the play. While it did not fit into her plans, she passed it on to Edwards.

"This is a job for the matriarchs of theatre," Edwards says.

"I would have preferred a Kiwi story, but this is such a sophisticated piece of writing — it’s international and ageless."

She was also a fan of the author, who is of a similar age and a comedian and actor herself.

"She is really witty."

A couple of years ago, she did some readings of the play, before roping in Jodie Dorday (who plays sociology student Viv) and Macgregor.

"They were the only people I could see in the roles — two of my dear friends. You have to be friends because it’s all about friendship."

They then searched for a director, wanting to find someone with whom the story resonated. Auckland actor, writer and director Stephanie McKellar-Smith fitted the bill.

When it came to production, they decided to do it themselves; Dorday’s Fusion Productions took it on.

It was important for them to do the production professionally, and they did not want to ask people to take part for free.

Fusion secured funding from the Creative Communities arts grant and the Otago Community Trust, and plans were made to open in March this year. Covid-19 put paid to that.

Then, Wellington’s Circa Theatre asked them to open the show as part of last month’s Women's Theatre Festival, which they agreed to do.

"Hats off to Jodie for pushing to make this happen, with the help of timing and luck and a lot of contingency planning," Macgregor says.

Taking part was a risk because of Circa’s profit-sharing model, which meant if Wellington went into lockdown or no-one turned up, they could have been out of pocket.

They attracted about 40% capacity, but — most importantly, Edwards says — they received an overwhelming response.

"It was quite extraordinary for us."

Macgregor says it is hard to explain the feeling of opening night, as they had a challenging production week.

"It showed me just how much people are struggling right now. But at the end of opening night to see people standing on their feet and to see people sat together in close proximity, all that hardship disappeared."

It was also a challenge for Edwards, who had not performed since March.

"You’ve got to keep match fit emotionally, physically, your voice or you lose momentum, so that has been interesting."

The show was Macgregor’s first as well.

She "lost two years’ work in one day" when lockdown hit. Like Edwards, she was in the final throes of production for a show, only in Wellington.

"It came to an abrupt halt and I caught the last ferry, getting home at 8pm on the eve of lockdown."

On the positive side, lockdown gave her and her husband some rare time together and an opportunity to apply for funding for other projects.

Getting the play to the point of going on stage was a tribute to the trio’s friendship, she said. Edwards has known Dorday since kindergarten days and Macgregor for about 10 years.

"The three of us, like our characters, also process things differently and in this pressured environment that is highlighted."

Macgregor and Edwards are delighted to be bringing the play to Dunedin, especially as Creative Communities and the trust allowed them to retain their funding to put it on in the city.