Crooked Spaghetti: it's not just cricket 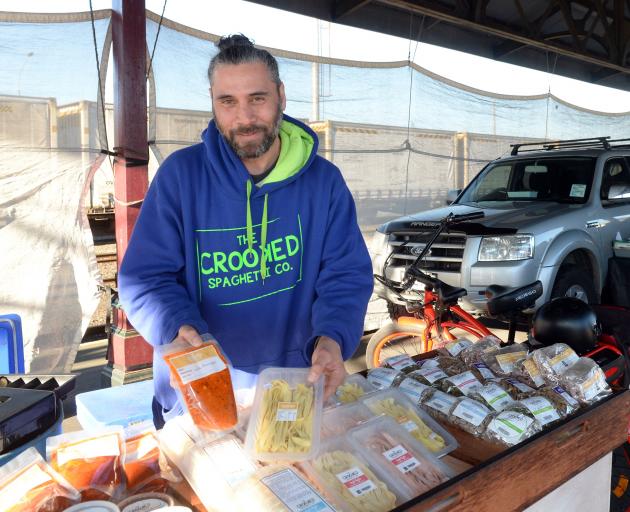 Marcus Tonga sells his pasta at the Otago Farmers’ Market. Photo: Linda Robertson
‘‘Innovation’’ and ‘‘flavour’’ are words that Marcus Tonga likes to use to describe his pastas and sauces. Rebecca Fox caught up with the Otago Polytechnic postgraduate student.

Ask Marcus Tonga about his passion for pasta and he is quick to assure you he is not Italian and it is not the pasta he is most into - it's the flavour.

Now studying for his postgraduate honours in design, Tonga is keen to experiment with flavours and local food products.

''R and D is where my head is at. I'm looking to solve people's problems about what to eat with high-quality innovation.''

The idea of taking an established product and creating a new concept appealed.

It is nothing new for the Dunedinite who has been working in restaurants and the fast-food business, most recently in management, until he decided to go back to polytech to study.

He grew up in a household with a mother who was interested in food and willing to try any new fad.

After throwing a few ideas around, his lecturers urged him to go for it, so he set up Crooked (with the K back to front) Spaghetti with the aim of producing innovative flavoured pastas.

''I'm not trying to do authentic Italian pasta.''

Pasta de Oro has helped out by letting him create his pasta at its factory. He is still searching for the right-sized commercial kitchen to produce the pesto-like sauces he also makes.

''Vito [Iannece] is fantastic he has 30 years' experience making high-quality authentic pasta. What I'm doing is completely different, but he loves his R and D.''

One of the first pasta's Tonga came up with was a multigrain with flaxseed that is a slow-release energy option.

Then there was the fresh-flavoured lemon fettuccine. He was still trying to ''nail down'' the garlic-infused pasta.

''It's not food to feed a family of four, but I am trying to do flavourful, innovative food that is still affordable.

''Something a guy can cook to impress his girlfriend.''

So far the lemon-infused pasta has been very popular, but the most surprising response has been to the ''cricket'' pasta.

''That has surprised me most. I thought it was a bit adventurous, but I sell just as much as the others. It's a bit more expensive because the cricket flour is expensive so it surprised me.''

Having some great food producers in the region also helped to inspire and create new types of pasta.

''There are some ecletic people in Dunedin doing a lot of different things.''

The response was encouraging and meant he felt encouraged to push the boundaries.

He is already looking at using local chocolate-maker Ocho's coco nibs in a pasta and looking at turning sheet pasta into tortilla chips and deep-frying them.

''It won't be healthy but its all about wellbeing and balance.''

Tonga is also looking into making stuffed pasta, but said there was ''shelf-life issues'' to be worked out.

''There is always hurdles.''

His aim is to make New Zealand pasta complemented by matching sauces.

''I want it to be very Kiwi - fusion food. Like English Indian food.''

He was still working on getting his packaging right so he could take the next step and have some of the pasta available at retail outlets.

In the meantime, he is enjoying testing out his products on Otago Farmers Market attendees who are appreciative of his products.