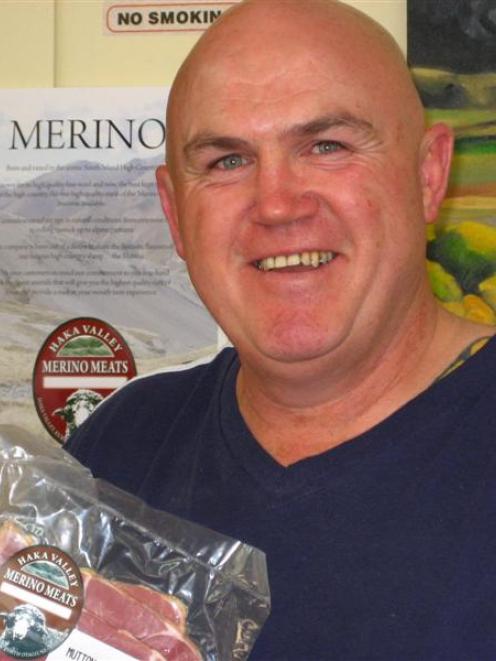 Steve Hotton, of Haka Valley Merino Meats. Photo by Charmian Smith.
Most of us know about fine merino wool and probably wear the soft, light, warm clothing made from it, but few of us have tasted merino meat.

It has more flavour and a slightly different texture from lamb as it is older - they take longer to grow than other breeds of sheep, says Steve Hotton, of Haka Valley Merino Meats.

The chef and former Otago rugby player has expanded his Valley Cafe and Bakery in Kurow, North Otago, to include a deli, High Country Pantry, which specialises in local merino meat and smallgoods made from it, such as salami, ham, bacon, pastrami and sausages - as well as merino pies and his cafe's specialty, warm merino salad.

The sheep from his business partner John Ablem's farm in the nearby Hakataramea Valley are killed in Ashburton. Then the meat is processed and vacuum-packed by Campbell's Butchery in Oamaru.

Hotton says his passion for good food was further fuelled during his time playing rugby in Italy and cooking in France and Canada, where he started the Kiwi meat pie company. He hopes merino meat will become a local and seasonal specialty, like oysters.

He and his partners also sell honey and preserves, have fresh fish once a week, and from December to Easter there's a small farmers market next door, with organic vegetables from Brydone Growers (also available at the Otago Farmers Market in Dunedin and the farm shop near Totara) and artisan bread from the wonderful Harbour Bakery in Oamaru, as well as other local produce, such as quinces and autumn strawberries.

Merino meats and small goods are sold at High Country Pantry in Bledisloe St, Kurow, phone (03) 436-0909, and by mail order from www.merinomeats.co.nz, which will be operational soon.

Several other farmers are selling merino meat. In Dunedin Cardrona Merino Lamb is available from www.cardronamerino.com and at the Saturday morning farmers market at the railway station and the Sunday Wanaka market.

Tom and Jan Pinckney at Northburn Station near Cromwell also sell merino meat, some of it ready-marinated by Jan, from the cellar door shop and restaurant on the northern side of Lake Dunstan.