Noses to the ground

Oaks and hazelnuts are the truffle hosts at Tarago Truffles, near Canberra. Photos: Gillian Vine
On a recent visit to Canberra, Gillian Vine noses out truffles.

What on earth am I doing? I asked myself on the flight to Canberra.

Surely it was madness for a woman who hated mushrooms and had never tasted a truffle to be heading to the Canberra Truffle Festival.

As it happened, truffles and I were to enjoy a love affair, a long weekend fling, thanks to the multitude of dishes featuring the prized fungi that grows so well in the region.

Winter is truffle time in Canberra, celebrated with an annual festival, when the region's restaurants honour the delicacy. It's not used in standalone dishes but lifts everything I try, from yummy truffle-enhanced brie and honey served with wine at Mount Majura Vineyard, a superb risotto at Contentious Vineyard and at Agostinis restaurant in Canberra's first-class East Hotel, an excellent Italian potato dish, Frico, topped with slices of fresh truffles. 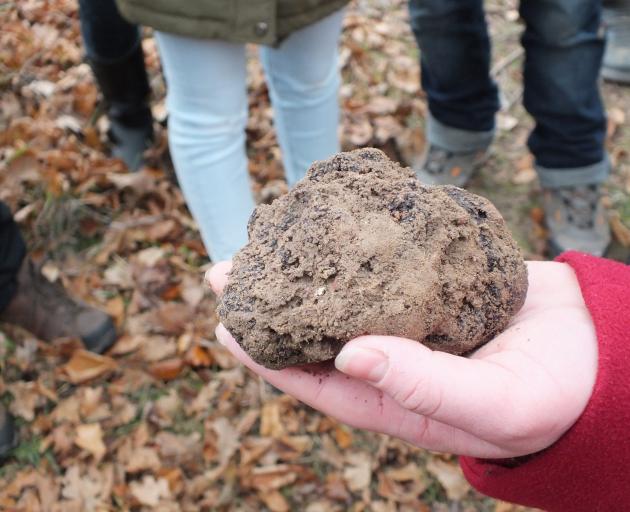 A 100g truffle dug on the hunt at Tarago Truffles.
Perigord black truffle (Tuber melanosporum) is the world's most prized variety. Known as black diamonds, they do exceptionally well in parts of the Southern Tablelands near Canberra.

They are grown commercially on the roots of oak, hazelnut and holly trees, but forget the notion of tossing spores on the ground around an oak tree in your back garden and making your fortune, says Dick Groot Obbink. 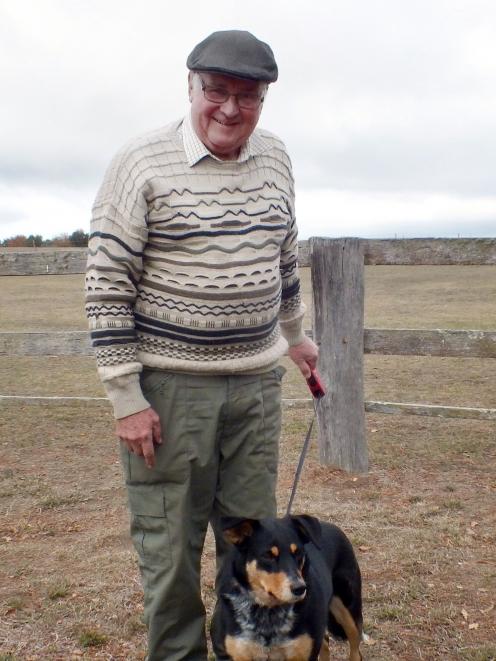 Dick Groot Obbink with his truffle dog Bella, a rescue dog.
A microbiologist and truffle farmer from the Tarago-Bungendore area, he explains that existing trees will already have their own competing truffles, as both Australia and New Zealand have hundreds of native ectomycorrhizal fungi, some edible but, alas, no substitute for the European delicacy.

It is therefore necessary to buy trees certified as inoculated with truffle spores, Perigord black being preferred as they fetch the highest prices. The top price paid for New Zealand truffles was $3500/kg, roughly the same as the world's most expensive spice, saffron.

I get a bit carried away, dreaming of converting my garden into a truffiere and making my fortune but reality bites, as Dick explains the requirements. The trees need to grow in very alkaline soils - he spread several tonnes of lime on a 1ha plot to get the optimum pH of 7.9, although truffles can be produced in soils between 7.5 and 8.3. Hot summers and cold winters are essential for the formation of truffles, which is why they do so well in the Canberra region and, incidentally, in parts of Central Otago.

The next requirement is patience, as it takes at least three years to get saleable truffles. When ripe, they look like lumpy brown puffballs, very slightly soft if pressed and ideally at least as big as a golf ball.

After Dick's explanation, I flag the notion of earthly treasure and concentrate on enjoying a truffle hunt at Tarago Truffles, near Canberra. Owned by Denzil Sturgiss, his wife Anne and son Matthew, it gives me an insight into truffle farming and harvesting.

The hunt is preceded by the Blessing of the Truffle Dogs, a meaningful reminder of the importance of crops (not just truffles) and animals to Australia. The dogs are not, as I expect, rare French or Italian breeds but allsorts that share a common ability to sniff ripe truffles underground.

One is Dusty, a 3-year-old brown kelpie-border collie cross. Owner Matthew Sturgiss says the rescue dog took just two days to get the hang of finding truffles. Asked what Dusty is worth, he hesitates, then says a top truffle dog would be worth $A10,000 ($NZ10,400).

Denzil Sturgiss carefully scrapes the soil from around a truffle his dog has found.
Chocolate lab Ruby was also a fast learner. That, her owner says, is because she's greedy and if finding truffles could bring her more treats, she's all for it.

The blessing was Denzil's idea and has been staged for five years.

Dusty sits on a post, more interested in the crowd than in former Australian Armed Forces Anglican Bishop and historian Tom Frame, who leads the service.

He tells the group of his concern about the gap between producers and consumers of food in Australia, pointing out that 96% of the population lives on 4% of the land.

Humans are responsible for guardianship of animals, whether pets or working ones, he says.

''Cruelty is never acceptable and never to be tolerated,'' Bishop Frame says, a comment that catches Dusty's attention.

After the formal blessing of the dogs, the hunt is on, but not before everyone - canines and humans - paddle through a bath of what smells like swimming-pool chemicals. The people are sanguine, the animals very unimpressed at the need to protect the truffiere from the risk of bugs brought in on paws or shoes.

Most of the dogs treat the hunt as a social outing, a sort of canine catchup, but Ruby is more focused, ignoring the other pooches and, as a result, scores the most truffles of the day.

She is not antisocial, Ruby's owner says; it's just the thought of more treats than keeps her nose to the ground.

-Gillian Vine was the guest of the Canberra Truffle Festival (trufflefestival.com.au). She stayed at the East Hotel in Canberra (easthotel.com.au)

Biggest but not the best
The biggest truffle ever found was in Italy in 2014 and weighed just under 2kg.

An Alba white truffle (Tuber magnatum pico) it was auctioned for charity and made $US50,000 ($NZ74,200) well below the $1million some optimists predicted before the sale.

Because truffles lose their moisture — and some of their distinctive flavour — the longer they are out of the ground, the successful Taiwanese bidder may not have got the optimum truffle after all.