Ann Barsby, from Jersey in the Channel Islands, shows us how to make soupe de congre.

Ann Barsby was born and grew up in Jersey. The island in the English Channel is famous for its Jersey cows, fish, apples and cider, knitting (which is why we call knitted jumpers "jerseys"), and early potatoes, known here as Jersey bennes.

When she was a child during World War 2, the island was occupied by Nazis, and people were not allowed near the coast. 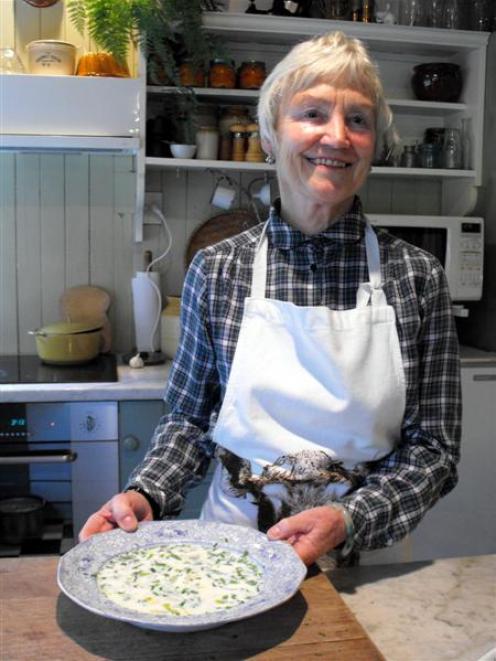 Ann Barsby with her eel soup. Photo by Ellie Constantine.

Food was short because fish and seafood had been a major part of their diet, she says.

She came to New Zealand with her English husband in 1971.

As Jersey is an island, fish was a major part of the diet.

She remembers as a child seeing conger eels displayed in fishmongers with their tails in their mouths.

They are big, meaty fish and the flesh does not break up when cooked, but any other white fish will do for this recipe.

The islanders' recipes, like those of most country people, are hugely adaptable, depending on what you have.

Peel and slice the onion. Put in a saucepan with the herbs and fish, and about a handful of pork pieces if using.

Add water and seasoning then bring to boil and lower heat to a simmer.

Cover and allow to cook very gently for about 30 minutes to an hour, depending on the type of fish - conger eel may take about 50-60 minutes.

To finish the soup, remove fish and allow to cool a little.

If using asparagus, wash, break off the ends and slice the shoots. Or slice celery.

Add leek, vegetables and milk to the soup.

Reheat to cook the vegetables brieflyRemove skin and bones from the fish, chop it and return it to the soup and allow to heat through.

Check the seasoning and add more salt and pepper if needed.

Garnish with finely chopped parsley or chives, and serve with crusty bread.

Tips
- Any kind of white fish can be used.
- Conger eel is particularly good because it is meaty and doesn't fall apart, but it takes a while to cook.
- The bright yellow petals of marigolds (Calendula officinalis) are often used in the kitchen.
- Mrs Barsby says they were one of the common ingredients in five Jersey recipes for this soup she looked at.
- In some they were added at the beginning, in others at the end. Sometimes the fish is not returned to the soup but eaten cold with vinegar.
- People in Jersey often bake their own bread in a cabbage leaf, which leaves an imprint on the loaf.