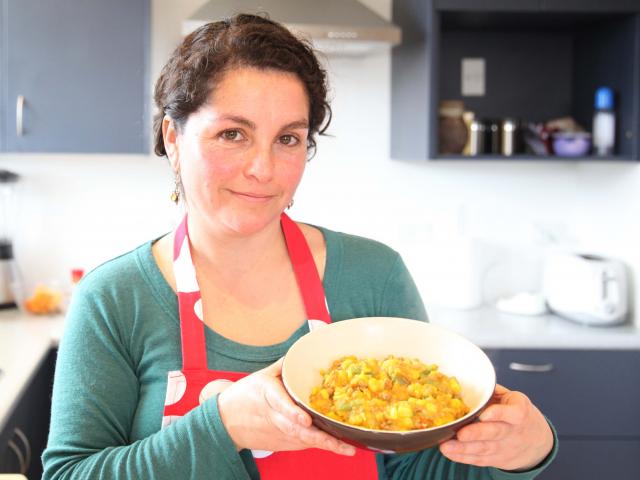 Flavours of home is a series of recipes from around the world cooked by people at home in Otago. This week, Carolina Gomez, of Chile, shows us how to make charquican.

Carolina Gomez came to New Zealand four and a-half years ago with her husband who is a geologist at the University of Otago.

Charquican is originally from the southern part of Chile but it is cooked throughout the country.

Carolina's mother and grandmother used to cook charquican often in winter as it is a warm, comforting dish, she says.

The indigenous Mapuches made charquican with dried meat (charqui) using guanaco, a type of llama that lives in the Andes, but now any meat can be used - here Carolina uses beef mince.

In Chile it is also made with chochayuyo, or bull kelp, which is widely eaten in southern Chile.

The vegetables she uses originated in the Americas: potatoes, pumpkin, capsicum, corn and beans.

Merkén is a Chilean spice made from dried peppers with other ingredients such as cumin. It is not a hot spice.

If you cannot find it, substitute smoked paprika or a little chilli powder.

Charquican does not have to be hot, but it should be tasty, she says.

Heat a little oil in a large pot.

Add the chopped onion and stir until slightly coloured.

Add the mince and stir to break it up.

Stir and leave to simmer.

Put the corn and beans in a little water to cook (or you can add them directly to the stew when the pumpkin and potato are half-cooked).

Cut the potatoes and pumpkin into chunks and add to the stew, along with a couple of cups of water.

Cook until the potato and pumpkin are soft and the water absorbed, 20-30 minutes.

Add the cooked corn and beans.

With a fork, break up the potato and pumpkin so you have a slightly chunky mash.

Serve in a large bowl, sprinkled with chopped parsley if you have some.

This dish is even better the day after it is made as the flavours mellow and develop.

Thanks to Afife Harris.