How to make Jersey bean crock 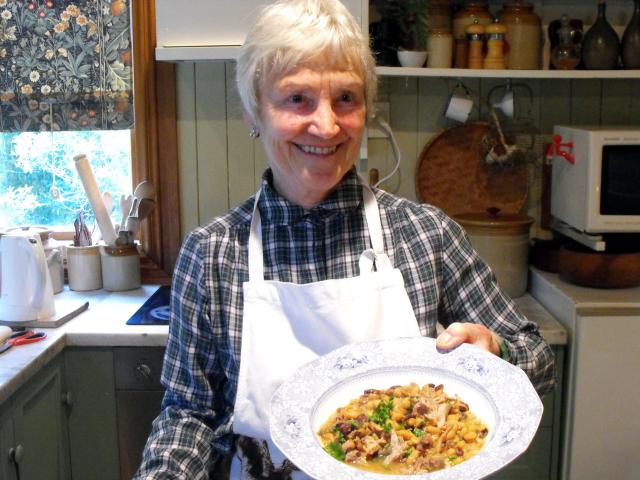 Flavours of home is a series of recipes from around the world cooked by people at home in Otago. This week Ann Barsby, from Jersey in the Channel Islands, shows us how to make Jersey bean crock.

Ann Barsby was born and grew up in Jersey, one of five islands (the others are Guernsey, Alderney, Sark and Herm) close to France in the English Channel.

She came to Dunedin with her family in 1971.

Originally part of the Dukedom of Normandy, the Channel Islands have been British Crown dependencies since 1204, and are fiercely independent.

The people were farmers, fishers and traders, and the traditional dishes came from the land and the sea.

This hearty dish is quick to put together and cooks itself slowly overnight or for several hours during the day.

Eaten for breakfast with a glass of cider, for which the island was famous, it would sustain fishermen or farm workers for a hard day's work.

It was also served at haymaking or ploughing suppers when the neighbours would help each other with the work.

Every family used to grow beans in summer, and dried them for use in dishes like this over winter, and every family kept at least one pig in a sty in the backyard, she said.

Roughly chop the onions and carrot if using, and put in a large pot.

Add the soaked and drained beans, the herbs and the pork hocks.

Season and cover with plenty of water or stock - if you are using salted pork, you may not need to add any salt.

Cover tightly with a lid and cook overnight or at least six hours, either in the oven at 150degC, on the top of the stove on low heat, or in a slow-cooker.

Top up with hot water if the liquid is getting low.

When you are ready to eat, take out the hocks, and remove the bay leaves and parsley stalks.

The hocks will be so tender the meat will fall off the bones.

Cut the meat into pieces and stir back into the beans.

Serve with crusty bread or greens such as cabbage.

• Cabbage, which was widely grown on the island, was often eaten with this hearty winter dish.

• This dish is typical of Jersey cooking - simple, humble ingredients, but hearty, well-flavoured food that did not need much attention during cooking and would sustain fisherfolk or farmers, Mrs Barsby says