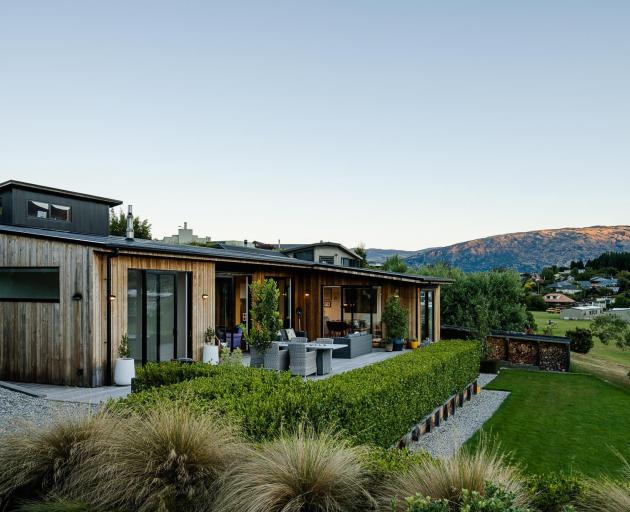 This Wanaka house overlooks the Mount Aspiring College playing fields, giving views of the mountains and a sense that the section is much bigger than it really is. PHOTOS: DION ANDREWS
The owners of this Central Otago house made warmth a priority. Kim Dungey reports.

If there was one idea the owners of this property kept returning to when planning their new home in Wanaka, it was making sure it performed well in a cold climate. 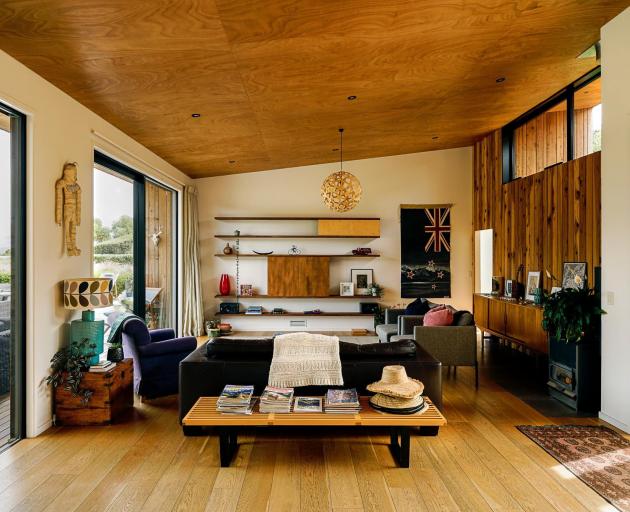 Redwood is used on the home’s exterior and the eastern wall of the living area (seen at the right of this photo).
Dave Gibbon says while it was not built to passive house standards, it is significantly warmer and drier than any other house he and wife Trudi Lowe-Gibbon have lived in.

The couple moved to what had been one of their favourite holiday spots after living through the Canterbury earthquakes.While their Christchurch house sustained only superficial damage, their workplaces had to be demolished and Mr Gibbon narrowly escaped falling masonry during the collapse of the Joe’s Garage building. 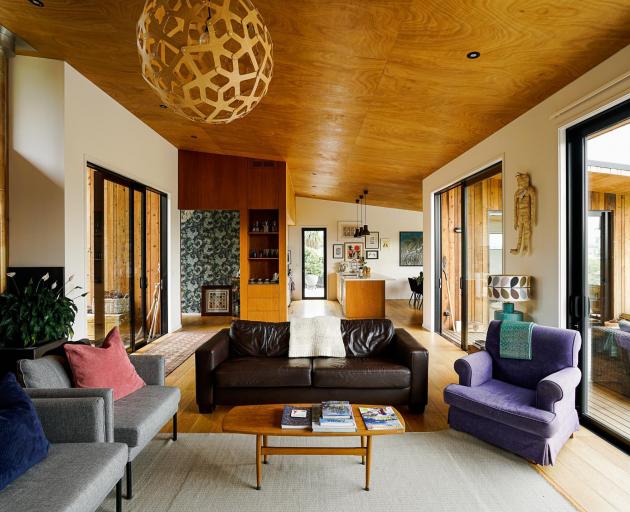 Sliding doors on two sides of the living room lead to outdoor areas that provide sun or shade.
He and his wife were renting in Wanaka when they "stumbled upon" their section overlooking the Mount Aspiring College playing fields, he says. 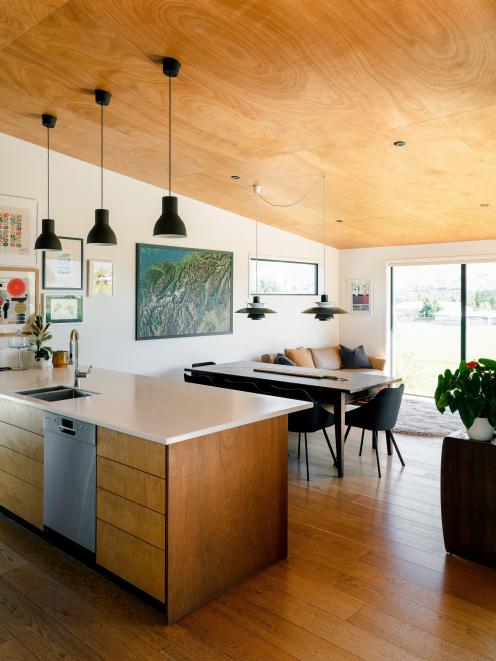 Natural materials such as oak composite flooring, timber veneer and plywood feature inside.

"It’s sloping and got a rather large house to the north of it which tends to block out the sun in the middle of winter and I suspect that probably put a lot of people off. But what it has got is an uninterrupted view across the school grounds to the mountains."

Though relatively new, with double glazing and underfloor heating, their Christchurch house "still wasn’t that warm". This time, they were determined to build something that performed better than the average.

Learning that Chris Norman, of Chaney & Norman Architects, had just built a house for himself from structural insulated panels (SIPs), the couple arranged a visit. Soon after, they hired Mr Norman as their architect and made the decision to use SIPs, rather than conventional timber framing and insulation, for the walls and roof of their new home.

Each panel is like a rigid "sandwich" with sheathing on each side of closed cell foam insulation, Mr Norman explains.

The uninterrupted layer of insulation offers high thermal resistance and the panels eliminate condensation within the middle of external walls, as can happen in modern timber-framed homes without a vapour control layer. 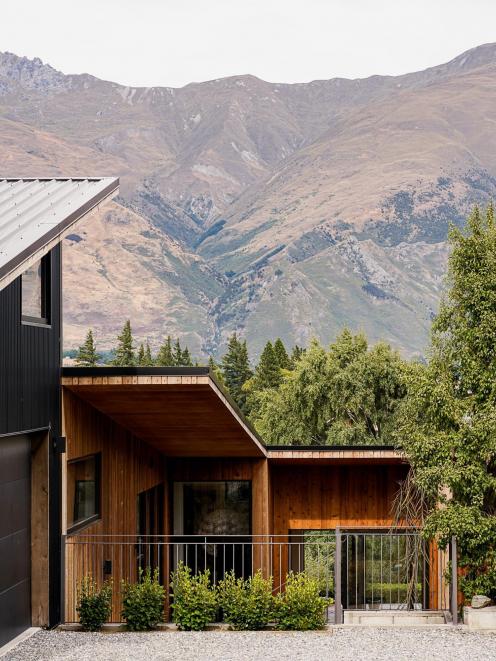 Rooms cascade down the site under a simple mono-pitch roof. Meanwhile, the garage at the top of the site has a steeper roof that accommodates a mezzanine office. PHOTOS: DION ANDREWS

The prefabricated panels from Kingspan were a quick, cost-competitive way of building because they arrived as complete walls, including insulation and window openings: "If you’re using a standard timber frame, you’d generally have to do quite a large wall build-up and a system of layering to get the same sort of thermal efficiency and air tightness ..."

Mr Gibbon says they wanted the four-bedroom house to look almost like a holiday home "and fit into the hill, not be a monstrosity that you could see from miles away".

"It also had to have really good indoor-outdoor living. So at the front of the house, we can sit in the sun but we can also sit behind the house out of the sun and both [areas] are connected to the living room."

Instead of digging a big hole in the bank, they stepped the house down so it followed the slope of the section, Mr Norman says. A subtle change in floor level in the hall added interest and the mono pitch roof meant they could create mezzanines for storage and extra sleeping space. Another mezzanine above the garage serves as a home office. 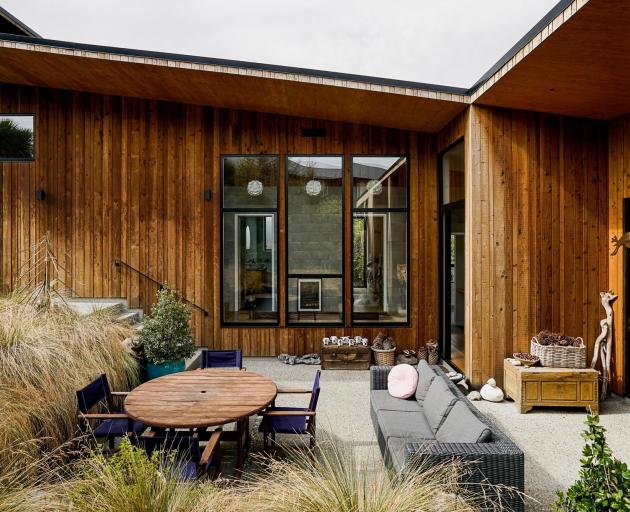 Hundreds of natives were planted around the house by the owners.

The higher ceiling heights also allowed them to use taller glass sliding doors, even at the lowest point in the living room, Mr Norman says, adding that windows that "chop the top of the mountains off" are one of his bugbears. 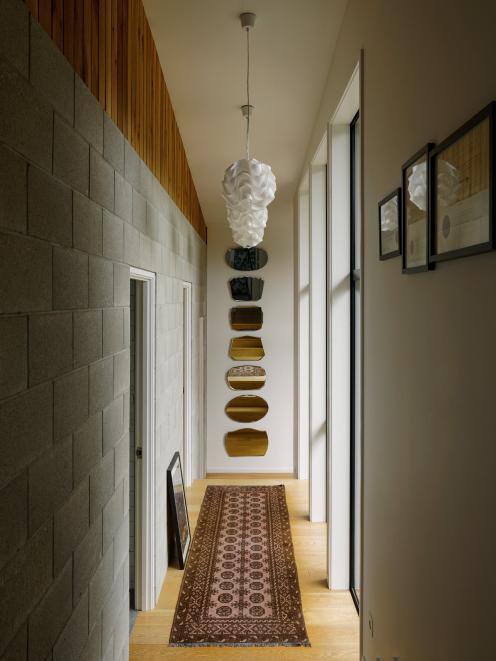 In winter, this masonry block wall captures and stores heat from the sun. The house also has thermally broken windows and slabs.

In winter, there is the option to use a woodburner. In summer, external blinds on the west-facing windows prevent overheating.

A mechanical ventilation system uses the energy of the warm, stale outgoing air to preheat the incoming fresh air and maintain the home’s ambient temperature.

On the exterior, redwood shiplap weatherboards were used as the cladding; a plantation in Nelson had just reached maturity.

Many people would have brought cedar in from Canada but the SIPs were imported from the UK and they wanted to offset that a little by using locally grown timber, Mr Norman says.

"There are overseas companies investing in growing redwood in New Zealand in places like Kaikoura and at the moment, with building supply problems, it’s really good to have alternatives."

The final touch, landscaping, was completed by the owners. 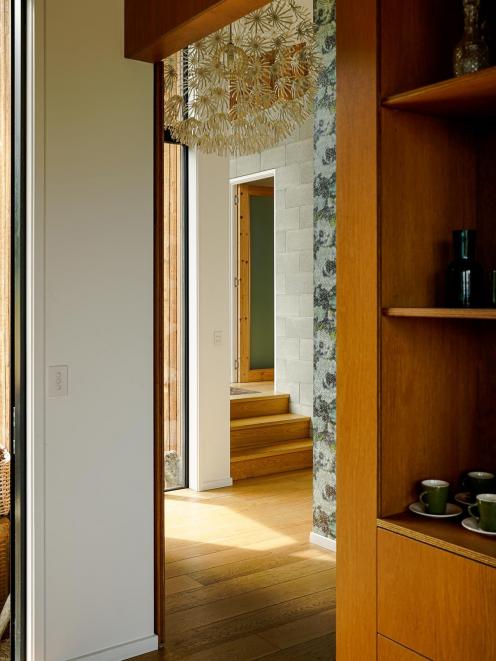 Two short sets of stairs lead to the family bathroom and guest bedrooms.
This involved building retaining walls, moving 35 cubic metres of soil from the top of the section to the bottom to flatten it out, planting hundreds of native plants and putting in irrigation, Mr Gibbon says.

"The idea was to create a sort of native forest around the house to complement the timber."