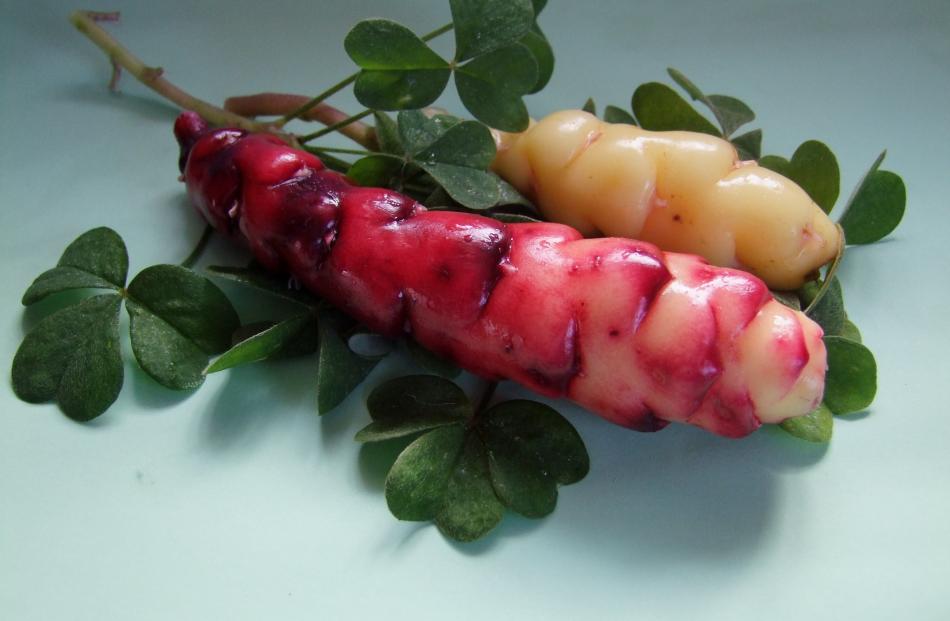 There is considerable variation in red oca tuber colour, even from the same plant, as shown here. Photos: Gillian Vine 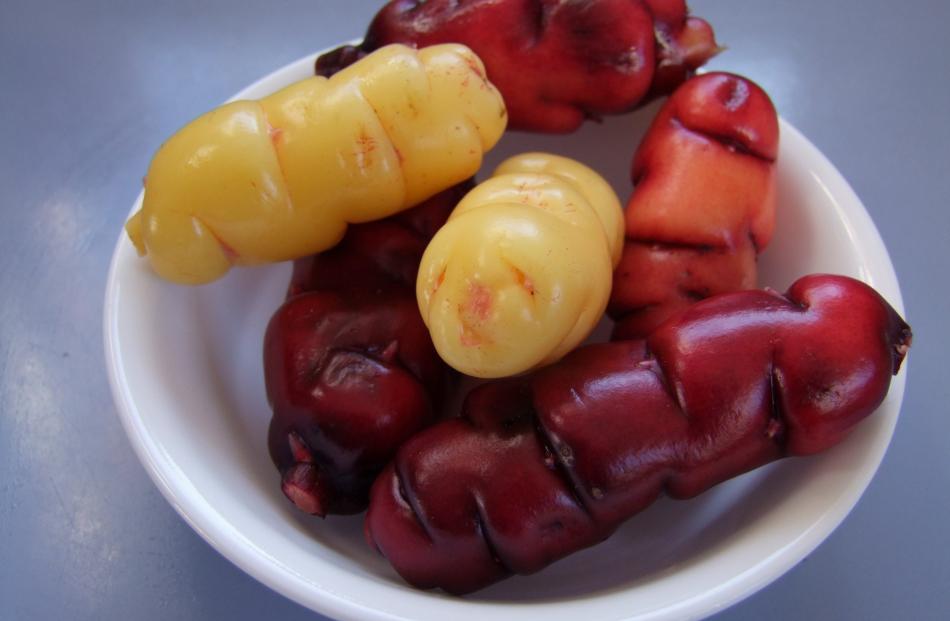 Red and yellow oca usually seem to have bigger tubers than pink. 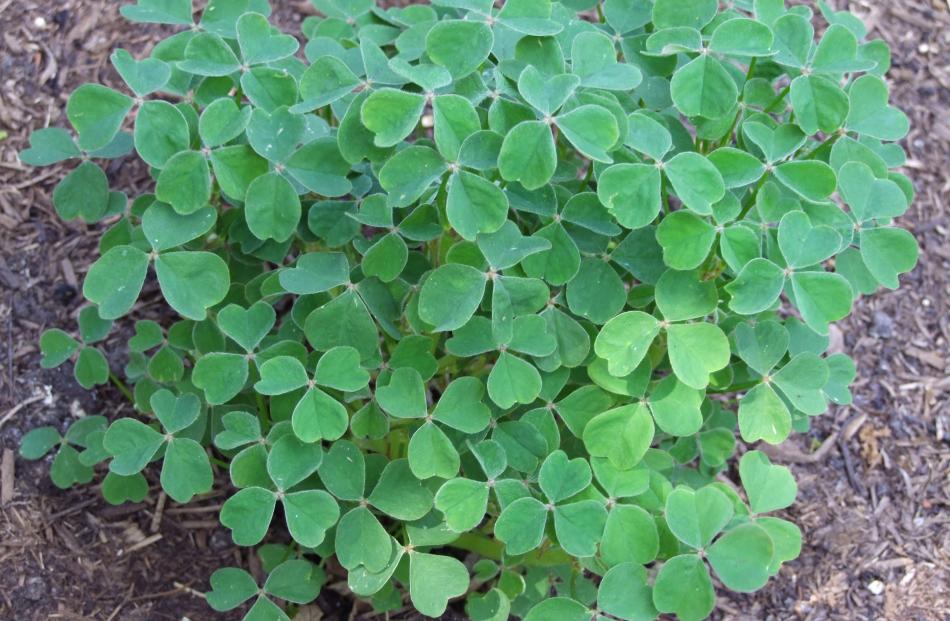 Shamrock-like oca foliage may have given rise to to the nickname Irish potato. 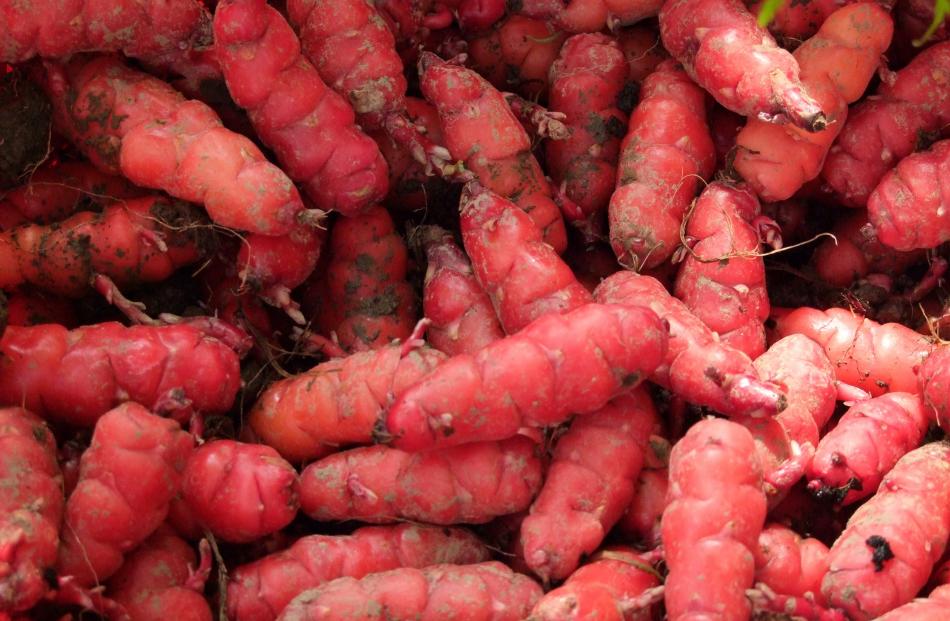 A good yield of pink oca, with lots of even-sized tubers. 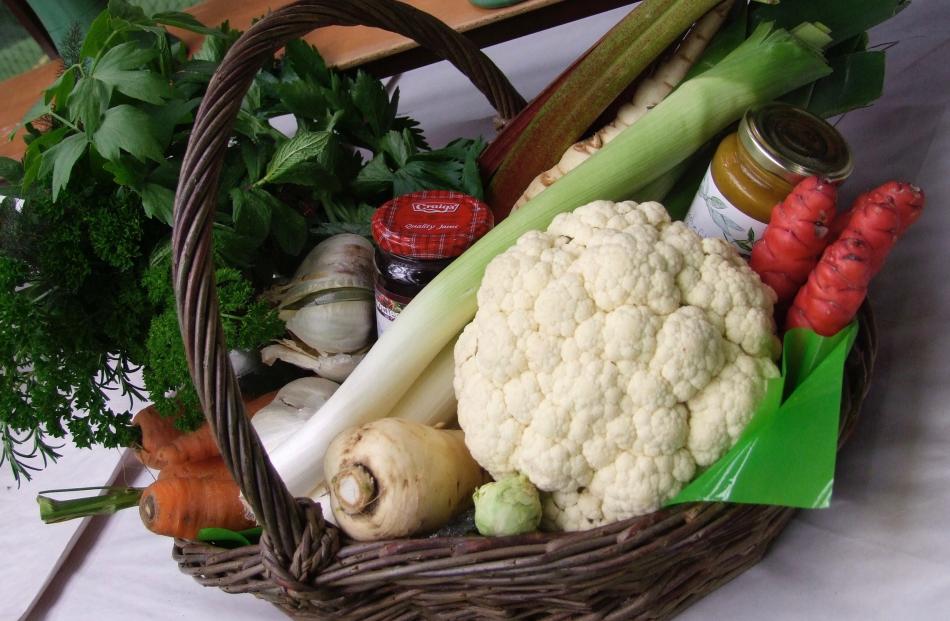 This prizewinning basket of vegetables at a Dunedin show included oca. 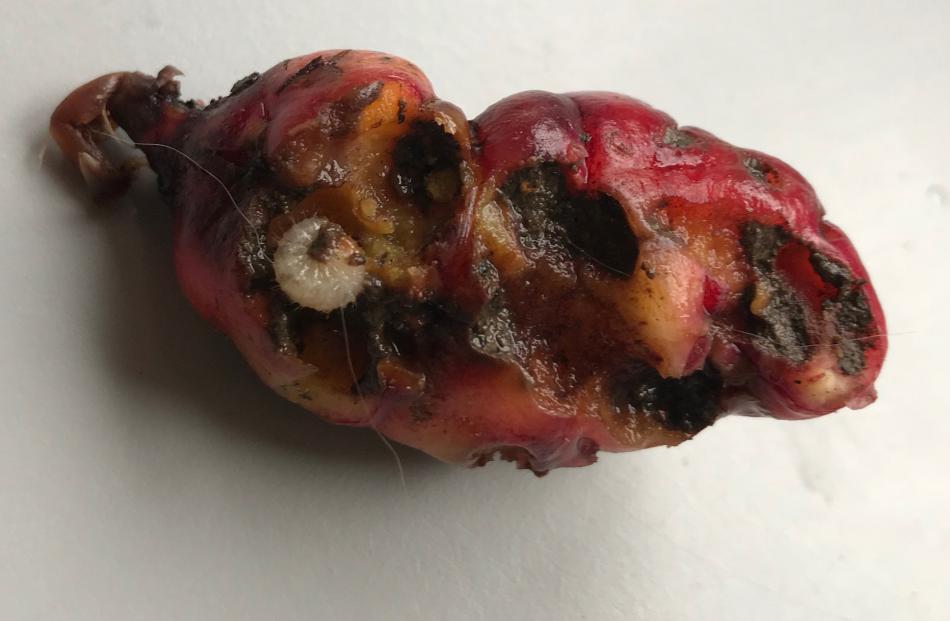 Grass grubs can damage oca, especially those growing close to the surface.

Gillian Vine looks at one of the South’s favourite vegetables.

Ours are Oxalis tuberosa, not true yams, which are tropical plants, so we obviously should practise calling them by their original name, oca. Ours are related to those pesky weeds, sour grass, horned oxalis and pink shamrock, which is why the tiniest tuber left in the ground pops up enthusiastically the following spring.

Another relative is Irish wood sorrel (O. acetosella), which — along with oca’s shamrock-like leaves — could explain why in the past, oca was sometimes referred to as Irish potato or Irish yam.

From the beginning, they survived because gardeners saved tubers to replant. Oddly, it was not until the 1980s that oca was first grown on a commercial scale and thus introduced to North Islanders who had missed out on this winter delight for something like 120 years.

South American in origin, the tubers were taken to Europe about 1830, apparently as a potato alternative, and made their way from there to New Zealand around 1860.

They are unknown in the wild, but because the most diversity of domestic plantings are in Peru and Bolivia, it is thought oca probably originated there. A related species has purple tubers, which would be interesting to try.

Reflecting their home ground high in the Andes, oca is one of the few vegetables that thrives in a shady spot and doesn’t mind if the soil is not very rich, although is should be free-draining. I add compost, rotted manure or sheep pellets before planting, which probably improves the crop and leaves the ground in better nick for what follows.

Spring is planting time and despite advice to grow sprouting tubers from early September, I usually leave mine until October when late frosts are unlikely. Of the three I grow (red, pink and yellow), the yellow seems to have the biggest tubers, while the red is the most prolific. Oca can be grown successfully in containers kept in a cool spot, which eliminates the risk of tiny pieces colonising the entire vegetable garden.

As they grow, the soil around the plants can be mounded up like potatoes, which seems to encourage the formation of more tubers. Water if the weather is dry.

The tubers are actually plump underground stem pieces, which really start to develop in autumn, so do not be in a hurry to harvest the crop, or you are likely to be disappointed. Leave them until frost turns the foliage to mush, then harvest as needed. If your ground freezes solid and stays that way for days or weeks, oca can be lifted and stored in a cool, dark spot. Small numbers can be kept in the vegetable bin of the fridge.

Save some good tubers to plant next season. They can be stored in dry sand or sawdust, but I confess mine just sit on a tray in the shed and they’ve always been fine.Supposedly one of the highest vegetable sources of carbohydrates and energy, oca can be eaten raw by grating it into salads, boiled (boring in my book), roasted or baked with orange juice and a dash of honey or brown sugar. The leaves and stems can also be eaten.

One of oca’s greatest virtues is being almost bulletproof, left alone by the kinds of diseases that attack potatoes. The only insect pests seem to be grass grubs and mounding up plants may reduce their ability to get in to gnaw the tubers.

With all these virtues, oca is one of the garden’s easiest vegetables. It almost deserves a slogan: "Oca, a great joker."