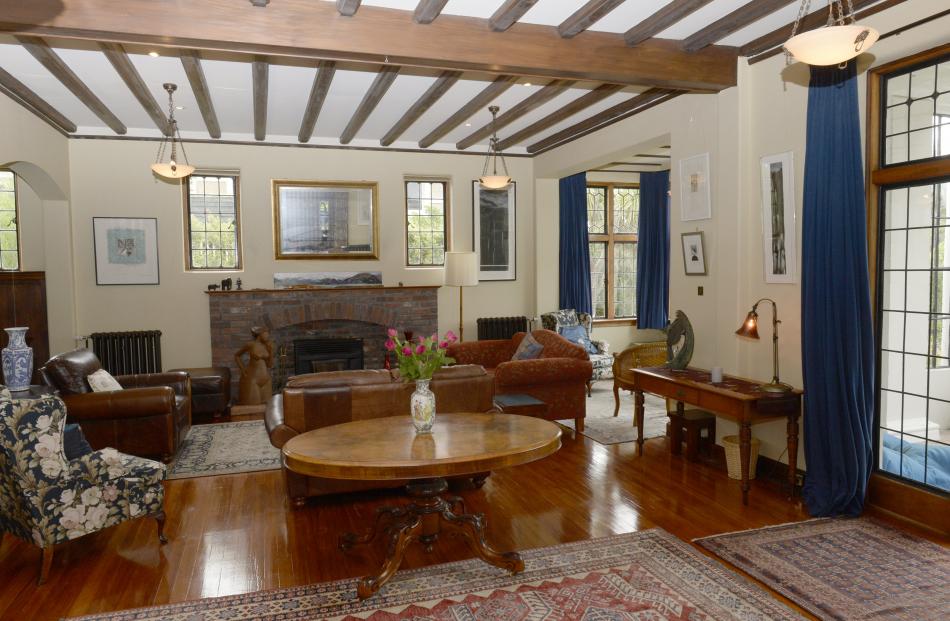 In the drawing room, the owners removed white plaster from the brick fireplace and uncovered the two windows above it, letting in the afternoon sun. Photos: Gregor Richardson 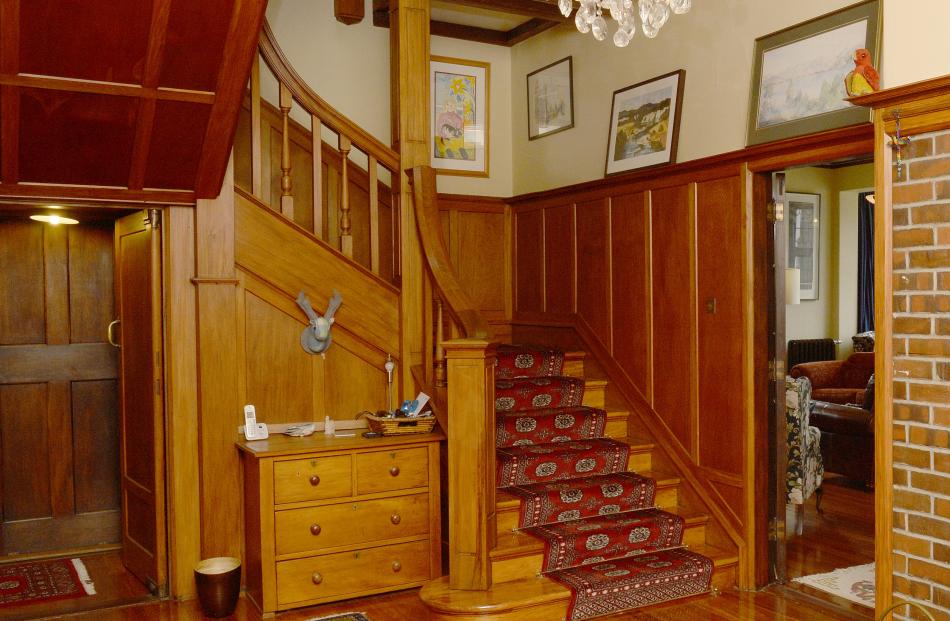 The main stairs were apparently not as steep as some so women could walk down in their long dresses without tripping. 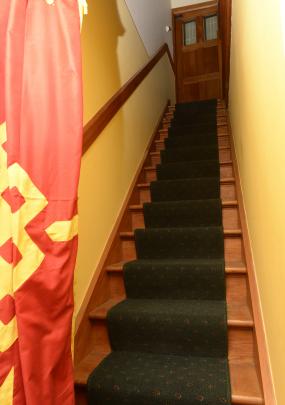 There was no such allowance for the maids' stairs. 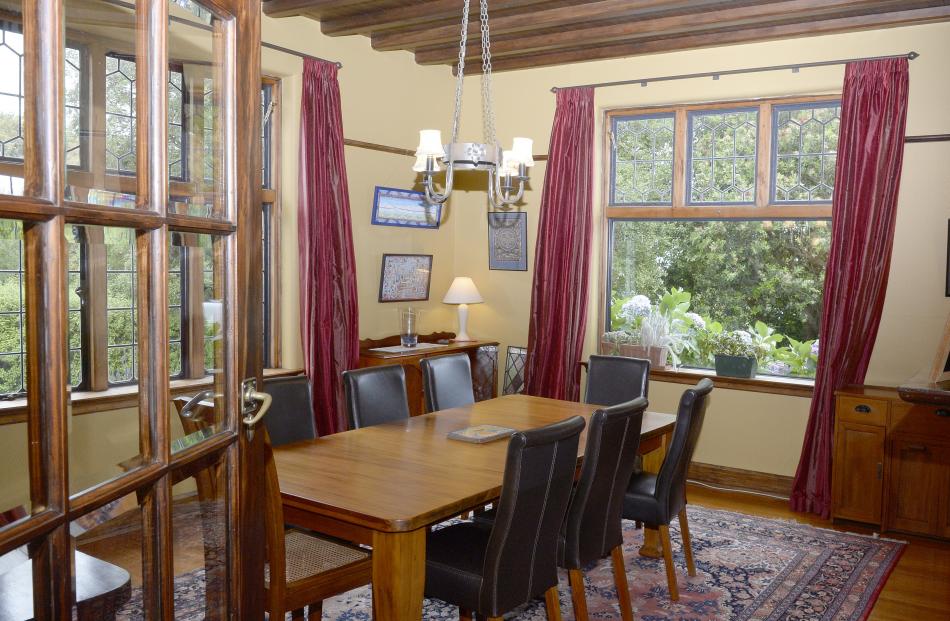 The dining room has a wood-panelled ceiling. 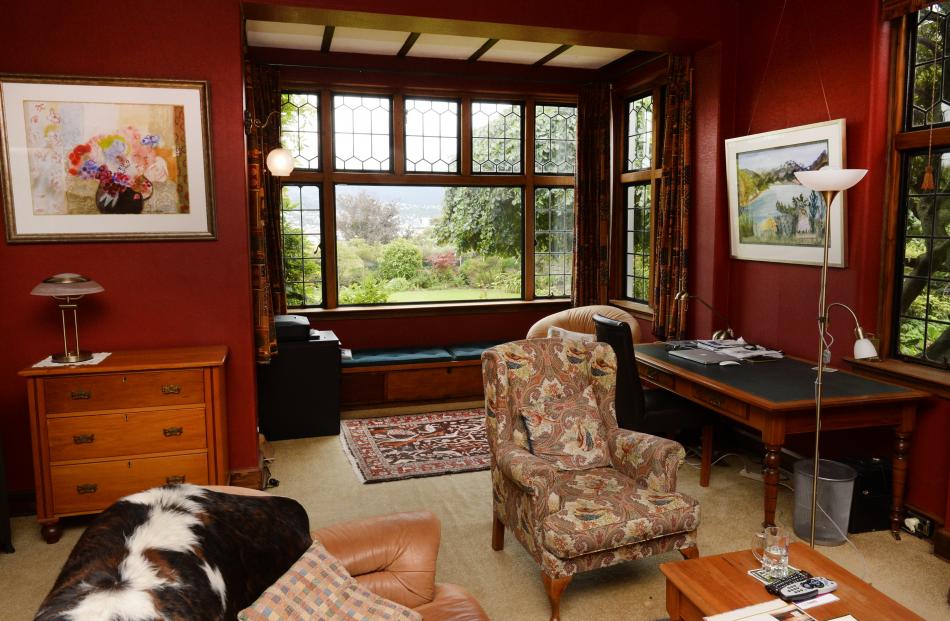 The snug was once a smoking room. Both paintings are by Annie Baird. 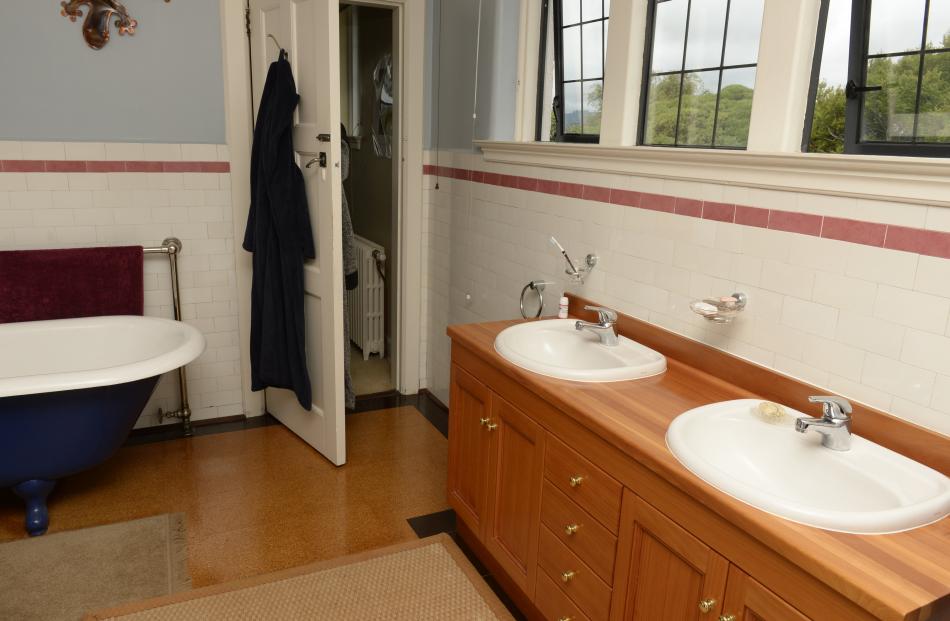 The ensuite was created from four small rooms. The bath and the pink tiles are both original. 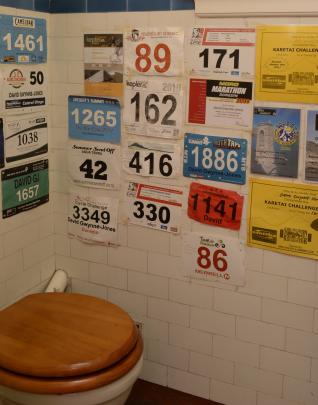 Race numbers are a playful touch in the downstairs toilet. Mr Gwynne-Jones competes in multisport events and Ms Reymann does adventure racing.

A historic Dunedin house provides a fascinating glimpse in to the lives of the people who have owned it and those of their live-in help. Kim Dungey reports.

When Ulla Reymann first saw this grand house almost 20 years ago, she thought it was "far too big".

"To me, it was completely over the top," she says.

"I just couldn’t imagine living in a place like this, even without knowing how much work was involved."

Where she was over-awed, husband David Gwynne-Jones saw a "wonderful opportunity". He liked the character, the large, lush garden and the amount of sunshine the property got.

Fast forward a few months and the couple were moving in on a wet, miserable day with their two young children. With their furniture still in storage, they slept on borrowed mattresses. As May progressively got colder, Ms Reymann sat in front of the log burner in the hall wondering what they had done.

"The house was freezing," she says.

"A lot of the window frames were rusted. There was hardly any heating . . . Everything was 25 watt bulbs."

"We knew we had to renovate but how did we do it? ... We didn’t quite know where to start." 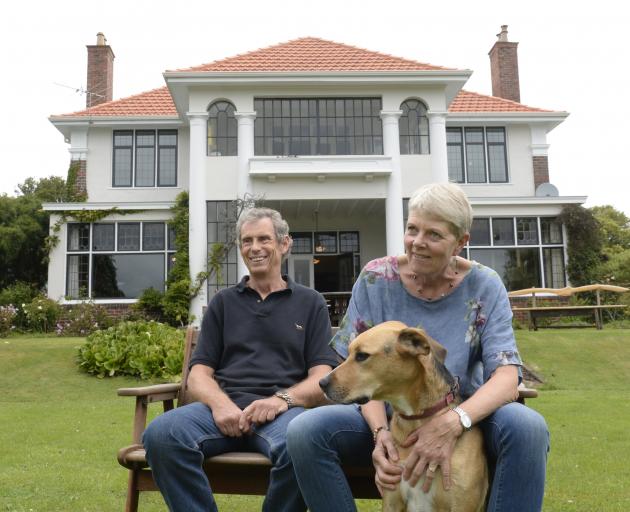 David Gwynne-Jones and Ulla Reymann, pictured with dog Monty, wanted to keep their home's character but make it more liveable. "It's been quite an adventure, Ms Reyman says. Photos: Gregor Richardson
One of the first priorities for the anesthetist and the orthopaedic surgeon was to install central heating, using "enormous" old radiators that the Otago Medical School was selling for $5 each: "People said only overseas people and mad people put central heating in but we both come from Europe and are used to it ... It made a huge difference."

Making the "big fridge" more user-friendly also meant improving the insulation, double glazing some windows, triple glazing others, and calling in engineers to repair the steel frames — several of the windows could not be completely closed so the house was "well ventilated’.

The kitchen was enlarged and updated, and a door hung on the butler’s pantry which still had meat safes open to the outside.

They also replaced the leaking roof, uncovered boarded-up windows, created spacious bathrooms from a series of smaller rooms and removed a huge lead-lined cold water tank from the roof space. Eventually they converted the gas heating to diesel.

One issue to address was what to do with the original maids’ areas, which included a sitting room, three small bedrooms, a tiny bathroom and a flower arranging room complete with sink. Domestic staff were summoned with the push of a button; several of these are still in working order and the central call box, which showed exactly which room needed service, has been restored.

Ms Reymann says the maids’ south-facing bedrooms had no plugs for heaters and must have been freezing. One is now used for storage, the other two were combined into a guest room and the sitting room off the kitchen made an ideal place for their children to do homework.

The kitchen was expanded by removing a servery between it and the dining room. The large painting above the table is by Ewan McDougall and the two smaller ones, by John Z. Robinson.
While the maids used a narrow flight of stairs at the back of the house, the owners’ three bedrooms, bathroom, sun room and dressing room were reached via the main stairs off the hall. This ground-floor foyer also opens to a formal dining room with wood-panelled ceiling, the original smoking room (now used as a snug), and a spacious drawing room that the couple and their children dubbed the "big room".

At night, when their son and daughter were sleeping, they flung open the front door for ventilation and stripped back the dark stain on all the doors and skirting boards, the main stairs, and the rimu panelling in the hall.

"It was a typical old house. The front areas were dark and sort of fancy and the back — the maids’ area — was all light wood."

While the couple wanted to make the home more liveable, they were also determined to maintain its character. Charming leadlight windows, bathroom tiles and fire surrounds were all retained.

Almost two decades on, Mr Gwynne-Jones says while he might have done some things faster, he would not do anything differently.

"We might have gone a little overboard trying to retain all the features early on but it’s a home, not a museum.

"It’s shabby around the edges and well lived-in but it works."

Ms Reymann says the house has also been well-used. The drawing room, with its sprung floor, has hosted several dances and when their children were young, the spacious interior was "wonderful for hide and seek".

"Kids would slide down the stairs on mattresses and all end up in the big room for sleep-overs."

At times she cursed the house because it was big and required a lot of maintenance but it was "incredibly special". 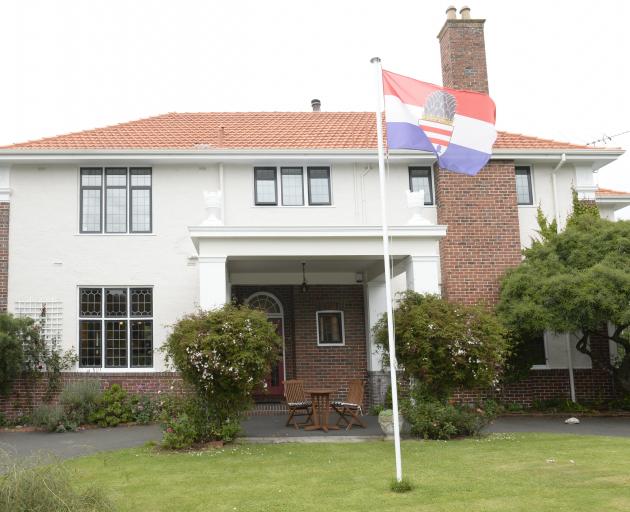 The flag of Kronberg, Ms Reymann's home city in Germany, flies near the entrance.
Brinkburn

Built in 1923 in the Dunedin suburb of Sunshine, this home was designed by architects Mandeno and Fraser for Mr H. S. Fenwick.

It was later home to a prominent medical family, the Batchelors, before passing to lawyers — the Ritchies, then the Gallaways.

The house is named Brinkburn, which the owners suspect might be a nod to a medieval monastery in Northumberland, England.

Brinkburn Priory was closed in the Dissolution of 1536 and later in the 16th century a house was established for the Fenwick family in part of the cloister buildings.

In 1927, the Otago Daily Times reported a ‘‘very happy little dance’’ was given at the Dunedin home, with flowers and maiden hair fern decorating the ‘‘ball room’’. A few years later, when one of the Fenwick daughters had her wedding reception at the house, tea was served in a large marquee.

The 2800sqm section contains large beech, ash and elm trees, as well as the remnants of a tennis pavilion.

The grounds were even bigger before the vegetable patch was subdivided off for a new house in about the 1960s.

The former tennis court is now a lawn.