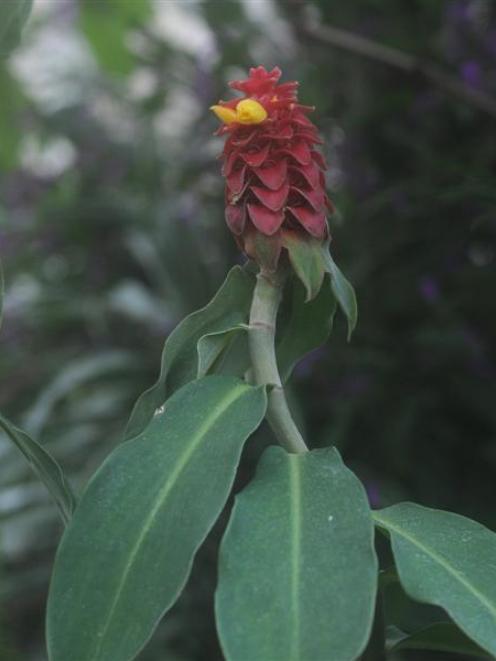 The hairs on the undersides of the leaves are so soft that they have that velvety puppy-dog ear feel.

Costus barbatus is a tropical perennial which has gently spiralling stems. The leaves are loosely arranged, also in a spiral fashion, around the stem, which has a flower at the top.

The bright red parts of the flower are bracts, which are modified leaves and technically not flower parts. The true flowers are yellow and contrast well with the red bracts for a tropical look.

Related to the common ginger that we use in cooking, Costus barbatus is commonly known as red tower ginger or the spiral ginger. It belongs to the Zingerberaceae family.

Native to forests in Costa Rica, it likes plenty of moisture in the growing season, with a reasonable amount of shade.

It thrives in high temperatures and high humidity but can tolerate cooler temperatures. However, it must be protected from frosts.

At Dunedin Botanic Garden it is growing in the heated east wing of the winter garden glasshouse.

Traditional medicinal uses for Costus barbatus have been passed down by indigenous people of the rainforests for hundreds of years and it has been used to treat many illnesses, from the common cold to gonorrhoea.

• Stephen Bishop is curator of the winter garden glasshouse at Dunedin Botanic Garden.